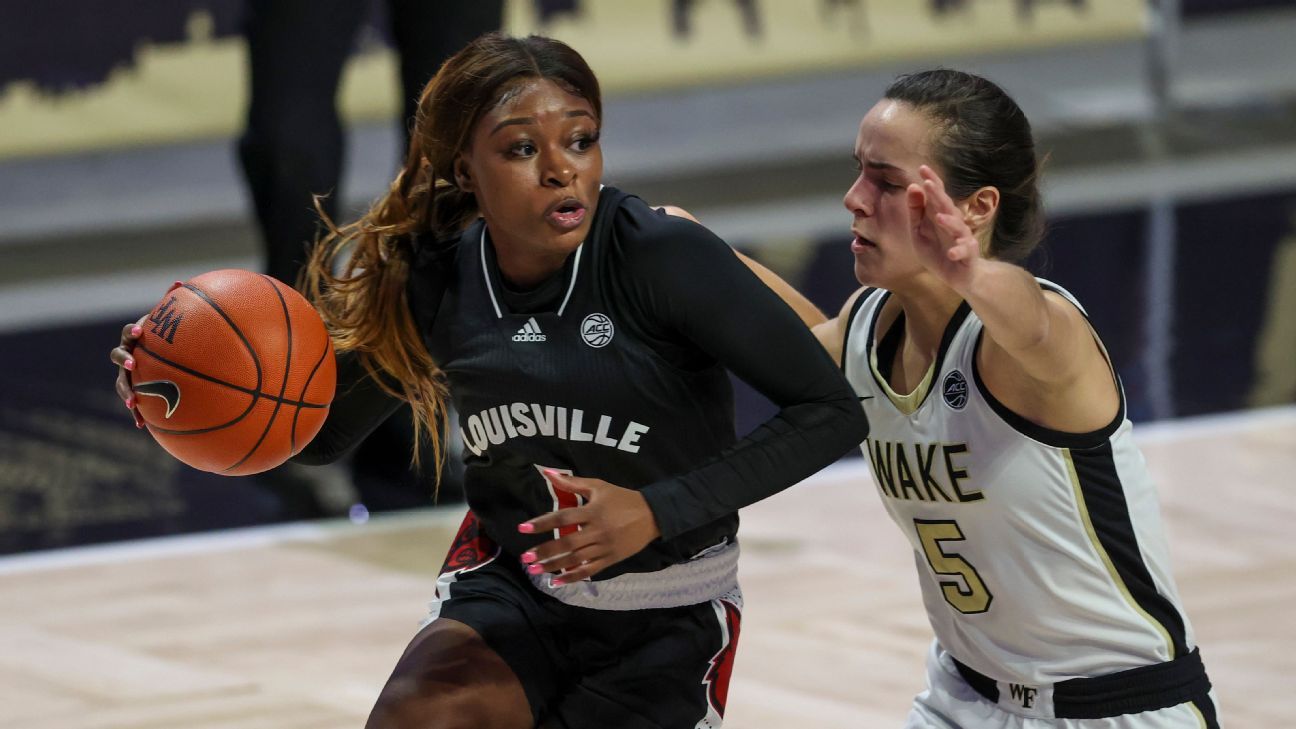 The debate rages over whether UConn’s Paige Bueckers or Iowa’s Caitlin Clark should be national freshman of the year.

We included both — and 10 total players — on ESPN.com’s 2020-21 women’s college basketball All-America first and second teams.

All 10 players, from South Carolina’s Aliyah Boston to Baylor’s NaLyssa Smith, already have won plenty of hardware for their performances this season, and each is expected to lead their teams into the women’s NCAA tournament. They are must-see players in March Madness.

The one-time ACC sixth player of the year and now two-time conference player of the year, Evans saved her best season for her last. She led the ACC in scoring and earned a reputation as a fearless, clutch player with fourth-quarter heroics against the likes of Miami, Virginia Tech, Notre Dame and Wake Forest.

It has been a few years since a player entered college and took the country by storm as quickly as Bueckers has. With three straight 30-point games, a clutch 3-pointer in the final minute against Tennessee and UConn’s final 13 points in an overtime win over South Carolina, Bueckers has already rung up a career’s worth of signature moments. She led the Big East in assists, was fourth in scoring, and finished in the top five of six other statistical categories. According to ESPN Stats & Information, and assuming UConn is a No. 1 seed come Monday, Bueckers will become the sixth freshman since 2000 to lead a No. 1 seed in scoring entering the NCAA tournament. None of the others were able to lead their teams to the title. Will Bueckers become the first?

While Cunane finished fifth in the ACC in scoring, third in field goal percentage and ninth in rebounds, her value to the Wolfpack goes far beyond the numbers. She is both the center and the centerpiece of their offense, with passing and decision-making skills atypical for a player her size. As Cunane has emerged as one of the country’s best players, NC State has become one of its elite teams.

Perhaps needing some time to adjust to her new role as Baylor’s top offensive option, Smith seems to be hitting her stride in the regular season’s final weeks. Both her scoring and shooting percentages have improved since mid-January. A unique combination of pure power and athleticism, Smith is equally impactful on the block as she is finishing in the lane in transition.

The SEC tournament illustrated just how talented an offensive player Boston can be and how good she makes South Carolina when those skills are on display. She averaged less than 13 points in the regular season, but averaged 19.3 PPG over three SEC tourney games as the Gamecocks captured their sixth SEC tournament title in seven years, the last two with Boston anchoring the middle. She also led the SEC in blocked shots and just captured her second conference defensive player of the year honor.

Brackets open on Monday night – create or join groups now to play with your friends!

If not for Bueckers, Clark would be the runaway choice for every national freshman of the year honor. The numbers are staggering. She’s the Division I scoring leader, and her 27.4 PPG is on pace to be the highest scoring average by a freshman in the past 35 years. Clark, who recorded a triple-double in her sixth college game, has 11 30-point games, the most by a freshman over the past 20 years. For comparison, Elena Delle Donne is the only D-I freshman this millennium to average at least 25 points per game (26.7 PPG in 2009-10), and Delle Donne had eight 30-point games her first season. Should Clark finish as the nation’s scoring leader, she’ll become just the second D-I freshman to lead women’s college basketball in points per game for an entire season (Ohio State’s Kelsey Mitchell averaged 24.9 PPG in 2014-15).

One of the best two-way players in the history of the Pac-12, McDonald led the league in scoring and steals for the third consecutive season, and won her second straight conference defensive player of the year award. She has been the centerpiece of the Wildcats’ turnaround, and enters the NCAA tournament having posted double-figure scoring in 87 straight games.

She has gone from Big Ten freshman of the year to one of the league’s best players and is the conductor of the nation’s highest-scoring offense and a rotation that has been just seven players deep for most of the season. Owusu has assumed more scoring responsibility with her power game from the point guard position, finishing fourth in the Big Ten in points per game and second in assists for a team that’s riding a 10-game winning streak into the Big Ten tournament and has lost only once since the last week of November.

With a combination of size, ballhandling skills and shooting range unlike most players, Howard continues to be one of the country’s most versatile players. But her scoring average fell by nearly three points per game, and she likely won’t win the national player of the year award for which she was the favorite in the preseason. Still, Howard’s statistics in a number of other categories (assists, rebounds, field goal percentage) improved and Howard earned a second straight SEC player of the year award.

The Cowgirls were picked to finish eighth in the Big 12 this season and instead won a program-best 13 conference games. Mack was the chief reason. The former junior college player of the year instantly became one of Division I’s most productive frontcourt players after her arrival in Stillwater. She leads the country in blocked shots per game, after finishing sixth a year ago, and is eighth in rebounding (third last season) to go along with her nearly 20 points per game.

Searching for the next Clemson