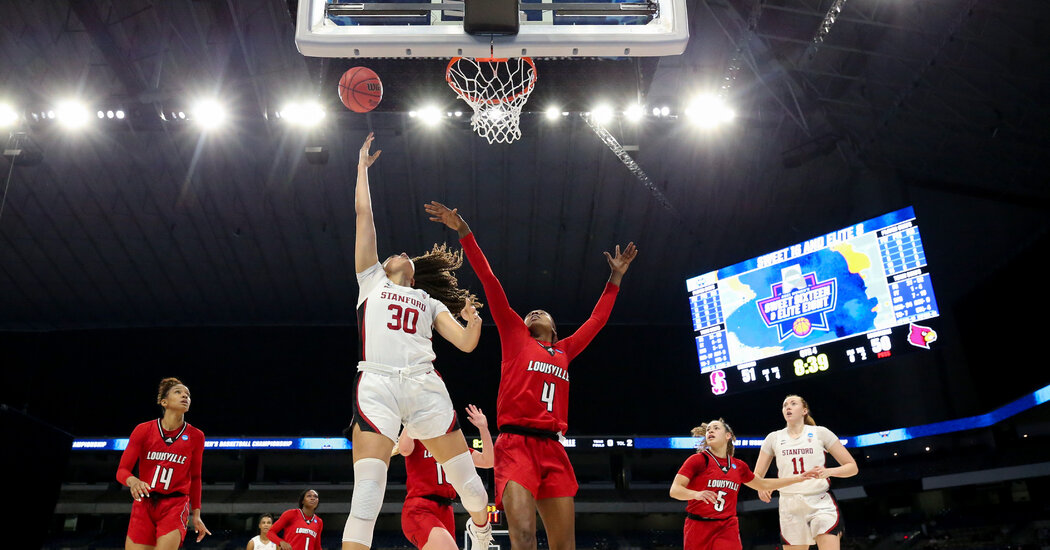 Top coaches in women’s college basketball pressed N.C.A.A. executives directly on Wednesday over what they have judged as chronic failures to promote and support the sport — longstanding tensions that have now ignited a public furor over disparities between this year’s men’s and women’s tournaments.

“We’re going to miss a huge window if we don’t change things now, if we don’t really step up to the plate at the N.C.A.A. as a whole to really water this sport, to really give it the attention that it deserves,” Nell Fortner of Georgia Tech told N.C.A.A. President Mark Emmert as coaches who have spent years leading teams through deep postseason runs watched.

The roughly 70-minute videoconference, which the Women’s Basketball Coaches Association organized and The New York Times viewed, came as the N.C.A.A. has struggled to move past criticism of its management of women’s basketball, which has grown into a greater force in college athletics. The unequal facilities at this year’s men’s and women’s competitions, coaches and executives alike have acknowledged, are only symptoms of deeper concerns about gender equity and whether the N.C.A.A. has unfairly prioritized the hugely profitable men’s tournament over the money-losing women’s competition.

Emmert told the coaches that the association recognized it had “some serious work to do” around women’s basketball and that “there’s no question that we dropped the ball, that we had some serious misses” around the 2021 women’s tournament, which will culminate Sunday night with the championship game in San Antonio.

“We’ve got to make sure that when we have our championships around our two marquee sports — the sports that more people watch than anything else — that we put on display the kind of equity that we all aspire to, and we sure as heck didn’t do that this year,” Emmert said.

College sports officials have said that the coronavirus pandemic posed significant logistical complications for this year’s tournaments. But some of women’s basketball’s leading figures used Wednesday’s meeting to argue bluntly to top officials that the very structure of the N.C.A.A. — like its organization chart and its budgeting and media strategies — had contributed to long-term inequities.

Dan Gavitt, the vice president of basketball, also acknowledged Wednesday that a dozen employees are dedicated to the men’s tournament, on which the N.C.A.A. is financially dependent, while six are focused on the women’s competition.

“As leaders, I think we have to bear the responsibility for anything that goes wrong in our organization,” Muffet McGraw, who won two national titles at Notre Dame before her retirement last year, told Emmert. “In the gender equity policy that you have, it appears that you have violated your own guidelines in what has happened in San Antonio with regard to the disparity between us and the men. However, it’s not just San Antonio — this is way deeper than that.”

Other coaches soon ticked through their own worries.

Geno Auriemma, Connecticut’s coach, warned that the university chancellors and presidents who have enormous influence over the N.C.A.A. and will play crucial roles in approving meaningful reforms “bring their biases from their own campuses.”

Dawn Staley of South Carolina challenged Emmert’s decision to hire a law firm to conduct a review of championship events instead of appointing a group that might be more independent.

U.C.L.A.’s Cori Close questioned why the association distributes money to conferences based on performances in the men’s tournament but not the women’s, and Fortner wondered why the N.C.A.A. had not made more use of its financial and marketing might to support the women’s game.

Fortner noted, for instance, that the men’s tournament had courts that amounted to “eye candy” for casual television viewers, potentially drawing them in as they toggled through channels, while many of the women’s games were played on floors that did little to suggest the gravity of the competition.

“If you were flipping through the TV to find the women’s tournament, you would not have stayed on the game,” she said, “because you might have thought it was a high school game.”

But during his exchanges with Fortner on Wednesday, Emmert suggested that N.C.A.A. officials were contemplating expanding the use of its March Madness brand, which is synonymous with men’s basketball, to include the women’s tournament.

“Why isn’t March Madness just plastered everywhere at the women’s N.C.A.A. tournament?” Fortner asked. “It’s not on our floors. It’s not anywhere, and I wonder why. Why not?”

“I think it should be,” Emmert replied. “I want to get to the answer to that question because the truth is, I don’t know.”

Gavitt acknowledged that ESPN, which broadcasts the women’s tournament, would have a voice in the deliberations about how to promote the tournament: “If ESPN is not going to embrace using March Madness in everything they do, is it enhancing the championship to the level that we all think it can? If they will, then I think it’s a great opportunity.”

ESPN declined to comment on Wednesday, but it would likely use whatever branding that the N.C.A.A. chose.

Emmert and the other executives offered little in the way of detailed guarantees to the coaches. Instead, they largely acknowledged concerns, pledged unspecified reforms and insisted that the N.C.A.A. had not deliberately diminished women’s basketball.

“I do believe and have believed all along that women’s basketball and women’s sports is and can be a very powerful social and economic driver,” said Lynn Holzman, a former Kansas State player who is now the vice president of women’s basketball and reports to Gavitt. “Just look at the attention it’s garnered over the last week or so.”

Indeed, the N.C.A.A. has seen its tournaments sometimes overshadowed by the management turmoil around the women’s competition. Wednesday’s apologies were only the latest expressions of regret, especially concerning workout facilities that were flimsily stocked for the women’s tournament in Texas and well-supplied for the men’s event in Indiana.

N.C.A.A. officials had hoped that the outrage surrounding the tournaments would ebb, especially as the competitions advanced to their later rounds. But that seemed to reflect a misjudgment of the frustrations coursing through women’s basketball and, for that matter, the wider college sports industry.

Less than 24 hours before the meeting with Emmert, Danielle Donehew, the executive director of the group that convened Wednesday’s call, released a video that challenged the association’s plan to investigate what had happened, much as Staley did on Wednesday.

“We will remain diligent in ensuring that the voice of our member coaches are heard and the best interests of our sport are protected as this much-needed review, whatever form it may ultimately take, begins,” Donehew said.

If the law firm’s review proceeds according to the N.C.A.A.’s timetable, a report is supposed to be made public this summer.