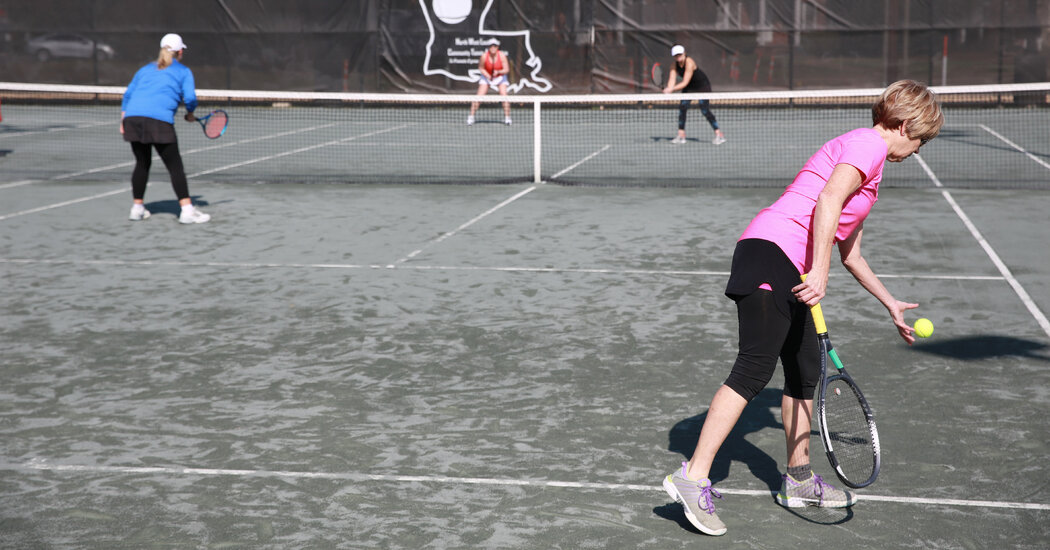 In 2020, the coronavirus pandemic all but shuttered recreational sports and leisure activities. Fitness centers and yoga studios closed as did movie theaters, museums and concert halls. Games as routine as checkers at a local park or pickup basketball in almost any setting were prohibited. Even playing in ultimate Frisbee leagues became fraught with risk.

And yet, golf and tennis, which have struggled to recruit new participants in recent years, flourished as idle athletes sought to play outside, at a safe distance, with some tweaks to accommodate new health guidelines. While more than half of tennis and golf facilities in the United States were padlocked in March and April because of the coronavirus, from June to December in 2020 golf rounds nationwide surged by 75 million as compared to the same period in 2019, a gain of 27 percent.

Data from the Physical Activity Council’s recent participation report, which monitors activity in more than 100 sports and activities, showed tennis participation rose 22 percent in 2020, with 21.6 million Americans saying they played the sport at least once. That included nearly 3 million new players and 3.8 million Americans who returned to the sport after a significant hiatus, a 40 percent increase from the previous year.

Tennis courts and golf courses have been packed with the people the leaders of those sports have tried to reach for years — beginners and novices whose numbers had been thinning at alarming rates. The newcomers flocked to those sports in large part because of their accessibility. For decades, local school systems and municipal parks departments have built thousands of tennis courts across the country that are free to use and easily located. While golf is often perceived as expensive and exclusive, in fact, 75 percent of American golf courses are open to the public with the average cost of a nine-hole round about $22.

The vast public investment in golf and tennis, using taxpayer money and public land, puts an onus on maintaining the pandemic boomlet. As much of the country makes plans to reopen, minders of golf and tennis are focusing on an essential question: how to retain newly hooked participants when other recreational options are available again?

The growth in participation in golf and tennis is largely being driven by more financially secure people who, in some cases, have the luxury of working from home and the extra time that provides, as well as access to golf courses and tennis courts. But many were younger. There were 3.1 million junior golfers last year, the most ever, with an average age of 12. While new and novice players account for a significant portion of the growth, “new” does not necessarily mean “young.”

More than 30 percent of beginning golfers last year were over the age of 40, according to the National Golf Foundation. The players run the gamut, from entire families playing together, women of all ages and lapsed players whose old equipment gives them away. Their arrival during the pandemic compelled golf courses to adopt a faster, more casual and technologically savvy way of operating that many at the top of golf’s hierarchy see optimistically as part of an ongoing cultural shift.

“There’s now a different mood about golf,” Jerramy Hainline, the senior vice president and general manager of Golf Now, an online tee-time service with nearly four million registered golfers that also provides technology to more than 9,000 golf courses, said. “The spirit is changing out there.”

The pandemic spurred a spirit of experimentation that may become permanent. To keep players adequately separated, for example, golf courses put players in single-rider carts, which quickened the pace of play. Another safety measure — prohibiting players from touching or removing the flagstick on each green — led golfers to putt out in order, speeding up tedious logjams on greens.

Many courses also adopted contactless check-ins at arrival, so that players could bypass the clubhouse. Hainline said his company developed a cellphone application, Smart Play, that identified golfers as they arrived in a course’s parking lot and then led them through the steps of checking in, paying for their round and locating their carts — all without entering the pro shop.

Operators of tennis facilities also felt a change of their sport’s culture was imperative. The average age of a tennis player is about 32, but local tennis professionals said new and returning players of all ages have come out to play since March 2020.

Mike Woody, national tennis director for Genesis Health Clubs, which owns more than a dozen tennis facilities in Colorado, Kansas, Iowa, Nebraska and Missouri, said the key to developing and retaining new players was convincing them that the sport was accessible to people of any age, not just those who took up the game as a youngster.

“We have to get rid of this image of what it means to be a tennis player,” Woody said. As far as he’s concerned, if you’ve got a racket and a ball and a space to hit it into — and you enjoy it — then you are a tennis player.

“We have to be facilitators of finding people opportunities to play, not compete, but to play,” Woody said.

As new and novice players have arrived at Querbes Tennis Center in Shreveport, La., its operator, Chris Dudley, said he is doing all he can to make the game a more personal experience. “I’m good with names,” he said. “I know the names of just about everyone who plays here.”

Dudley, who runs the facility with his wife, Amy, said the growth has been “quick and organic” since the facility reopened full-time on June 1. Roughly 2,000 people played on the facility’s 11 courts from July to September, including as many as 275 new players. Night play, under the lights, was especially popular during the summer heat.

He is one of the more than 11,000 professional coaches the United States Tennis Association hopes can help maintain the uptick in participation by championing the sport locally and ensuring that the people who show up to play have a quality experience. Craig Morris, the chief executive for community tennis at the U.S.T.A., the national governing body for the sport, said there is no silver bullet to retention, but the organization is setting aside several million for grants to public tennis facilities to help equip them with knowledgeable tennis directors.

“This is really local level stuff,” Morris said during a recent interview. “You create a good pied piper to deliver great programming for instruction and then connect people to play socially or enter a league.”

Dudley is not a high performance coach aiming to produce a Wimbledon champion. Instead, the Dudleys are doing all they can to meet players where they are. Chris Dudley said he has found that, generally speaking, most of the women the club serves want a social experience, to play with people they know at their level, whereas the men yearn for competitions against other local clubs.

The Dudleys have held monthly mixers, with food trucks, a bartender, and tables spread out to maintain social distance.

Leaders in both sports see lessons learned from the surge in participation during the pandemic that can widen the pool of potential devotees.

Morris said the U.S.T.A. also remains in close contact with the leaders of U.S.A. Pickle Ball, the national governing body for the fast growing racket sport, figuring that active people who like one racket sport may want to play another. “It’s not us vs. them,” he said.

Tim Schantz, the president and chief executive of Troon, a golf management company that serves more than 600 golf courses worldwide, said his course operators have come to understand that they must offer “more flavors of golf,” and let the consumer choose. Schantz mentioned the recent proliferation of par-3 courses or six-hole and nine-hole facilities as well as golf clubs with massive putting complexes for the kind of informal play that can be done with a cool drink in one hand.

“It’s another way to get golf into people’s routine and that’s how you really increase retention,” Joe Beditz, the National Golf Foundation president and C.E.O., said.

Hainline believes there is an ongoing transformation taking place in golf.

“I talk to chief executives of large golf management companies regularly,” Hainline said, “and there is an excitement in their voices that I don’t normally hear at this time of year.”