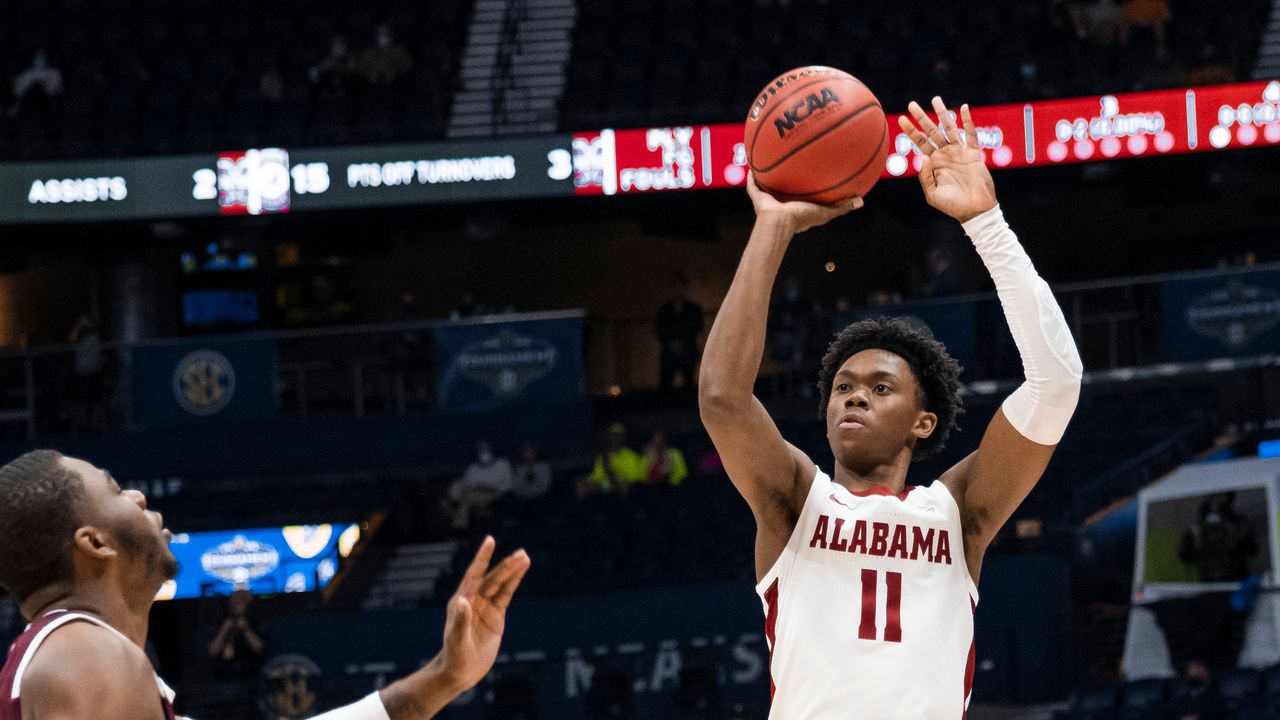 Alabama men’s basketball is only 10 days removed from its season-ending loss to UCLA in Indianapolis, but the process of squaring away the team’s roster for next season is in full swing.

A major domino fell Tuesday when four-center Charles Bediako committed to Alabama over a list of other schools that included Duke. That propelled the Tide past the Blue Devils for the third-ranked 2021 recruiting class by 247 Sports.

Alabama could make another addition Thursday when Texas Tech transfer Nimari Burnett is expected to announce his choice. The Tide are one of seven schools in the mix for the 2020 McDonald’s All-American guard along with Auburn, LSU, Illinois, USC, Vanderbilt and Oregon.

And on Sunday, former Furman forward Noah Gurley will announced his transfer destination from a list of schools that includes Alabama, Auburn, Duke, Florida and Tennessee.

Bediako will fill Alabama’s 13th scholarship for the upcoming season, which is the NCAA’s limit. That means they would need to clear a scholarship in order to add Burnett or Gurley.

The national signing period for basketball begins next Wednesday, at which point Bediako is expected to sign his letter of intent to join Alabama.

Who else is part of Alabama’s expected roster next season? Here is a run down of their scholarship players:

The Tide also has a pair of incoming freshmen on football scholarships, guards Ga’Quincy McKinstry and Terrion Arnold, who could contribute after football season.

Here is what Oats said about the newcomers to the team next season other than Bediako, who has not officially signed:

Oats on Davison: “It is a priority for us to keep the best players in the Alabama coming to the University of Alabama. We all feel like JD is the best point guard in the country for the way we play. He is at his best when he is in the open floor and in transition. He can create off the dribble, make shots – especially clutch shots – and creates for his teammates. We felt like this was a match made in heaven with the way he plays and our style of play. We are really excited about JD because he’s an Alabama kid who’s been an Alabama fan his who life and wants to come here and take this program to the next level. We think he’s going to do just that.”

Oats on Holt: “We needed to find someone to replace John Petty who is one of the best shooters in the country and we felt like we went out and got one of the premier shooters in all of high school basketball in Jusaun Holt. We also love the fact that he is a two-way player. We want everyone we recruit to take the defensive end as serious as they take the offensive end and we feel he is certainly that way. We think he is one of the best two-way wings in the country. He comes from Atlanta and I know the last player we got from that area turned out pretty good in Collin Sexton. We want to keep that pipeline going. We’re ecstatic to get Jusaun and we think he is going to fit our style of play perfectly.”

Oats on Tchikou: “Alex is exactly the type of front court player we’re looking for in our system. He’s long and athletic with guard skills. He can shoot and play on the perimeter as a 6-11 wing while also adding rebounding and shot-blocking in the paint. Alex’s attitude and work ethic is outstanding and he has shown tremendous improvement in the past year. Alex has great upside and we’re confident he will fit in perfect with the gym rats we currently have in our program.”

Oats on Wilson: “We think Langston has a really high upside. He’s a gym rat, he’s long and athletic. He had a misdiagnosis in high school that kept him from playing basketball so he’s only played one year of organized basketball and we feel he has a tremendously high ceiling. We are looking forward to getting him in here next summer. His length and athleticism will add a lot to our team next season.”

The other aspect of Alabama’s offseason will be the NBA draft and its departing seniors. That group includes John Petty, Herb Jones, Alex Reese and Jordan Bruner.

One two-round mock draft from Bleacher Report last week projected Jones to be selected No. 46, while it did not have Petty picked. Jones is the No. 57 ranked player in the draft by ESPN, while Petty is No. 78. It appears Petty will fall short of he and Oats’ goal to become a first-round prospect, if he is drafted at all.

All of Alabama’s seniors have the option of returning for an extra year of eligibility granted by the NCAA. But Oats has noted that all have either graduated or are on track to earn their degrees this year, leaving less incentive to stay in school. Petty posted an apparent farewell message Tuesday to Instagram.

The NBA draft will be held July 29, with a May 30 deadline for early entries to declare and July 19 deadline to withdraw. Petty and Jones both took advantage of that pre-draft process last season before returning to school, but it seems less likely Alabama will have players doing the same this summer.