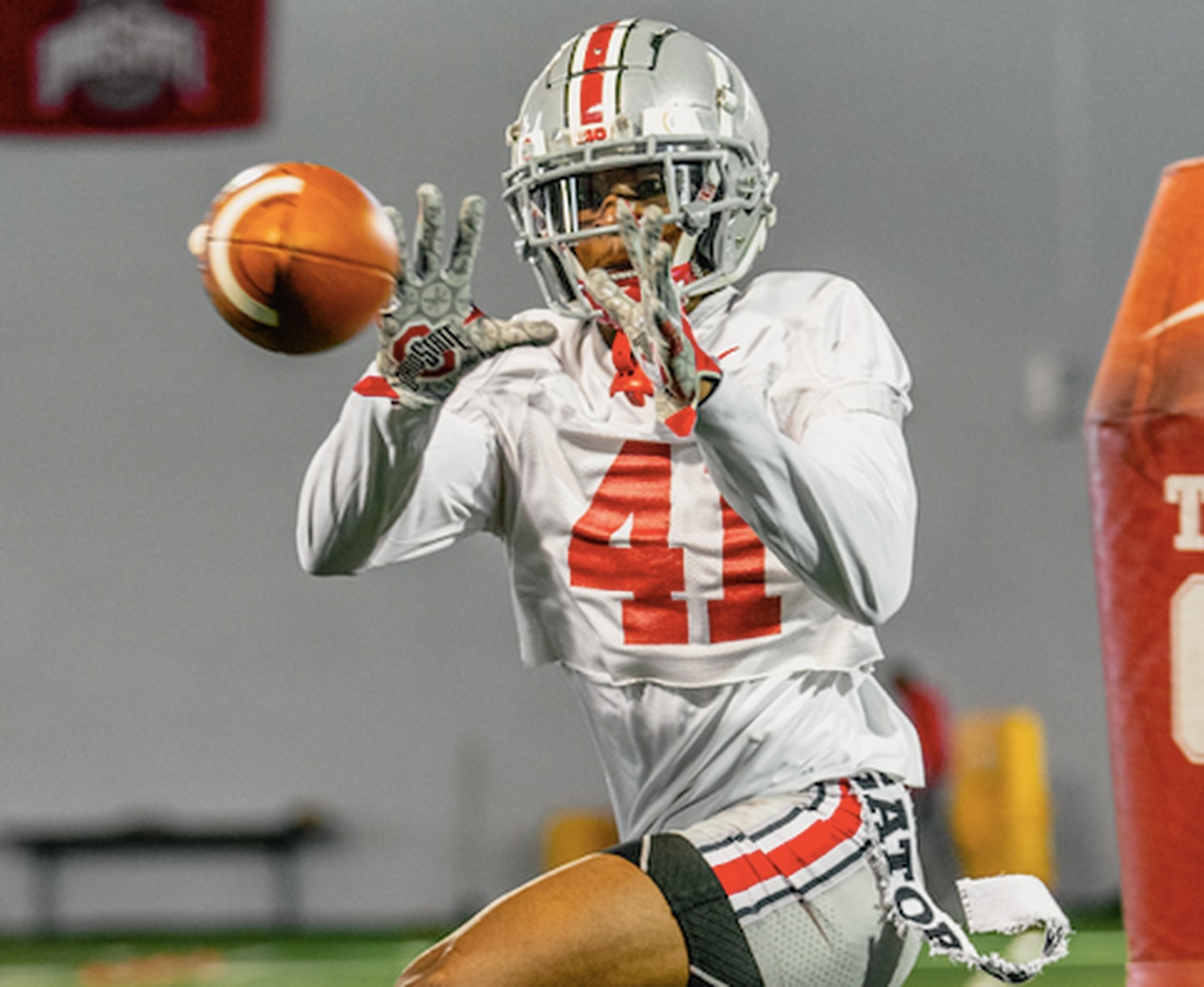 COLUMBUS, Ohio — Ohio State recruited Paris Johnson Jr. to take over at left tackle when Thayer Munford moved on after the 2020 season.

For a while it seemed that timeline might still be in place. Munford accepted an invitation to the Senior Bowl after breaking out to become an All-Big Ten Conference tackle and improve his NFL Draft stock. Had he played in that exhibition, his Ohio State career would be over.

Then the Cincinnati native reconsidered. Years earlier he promised his mother, MeLisa, he would finish his degree. He is on pace to finish that in August. He wants to eventually become a coach and athletic director, pursuing the same life-changing influence others once had on him.

So how did Munford break the news to Johnson that he would return for 2021 — a move that likely leaves the former top-10 national prospect playing inside at guard this fall?

“But I was telling all them, before I actually made the decision I should come back, that I’m going to be coming back and we’re going to be working. No matter what. I could be on the sideline and we would still be working. We’re gonna make sure we do the corrections right.”

Ohio State coach Ryan Day said Wednesday that Johnson would begin the spring at guard. OSU offensive coordinator Kevin Wilson said he believed the sophomore has the athleticism to move spots as needed.

“Sometimes some of those guys can maybe a little bit too big to be a guard,” Wilson said..” But I personally think, especially if you’re staying on the same side … you just move over. It’s a little bit different matchup, but the words are the same.”

What else is going on with the offense?

Wilson said sophomore tight end Cade Stover was recognized by the strength staff as having one of the winter’s top performers. He said walk-on Mitch Rossi will be back in a hybrid fullback role. He called redshirt freshman Joe Royer “a guy that needs to come on.” What he did not say is Ohio State has a No. 2 tight end it can bank on after Jeremy Ruckert, considered to be among the best in the nation. He did indicate OSU may play fewer two tight-end sets this fall unless that question is answered emphatically. “I don’t think we have to figure it out by spring, because I think we’re gonna need this summer to continue that development of physical toughness and strength level,” Wilson said. “And I think it will probably be middle of the preseason before we know if we truly have a second tight end that we can compete for a Big 10 championship with, because we’re gonna need that player to be the complete team we need to be.”

Wilson said the idea of trust will be ket to the running back competition — especially with freshmen TreVeyon Henderson and Evan Pryor. It’s another position where he expects the depth chart to remain in flux well into preseason camp. “It’s one thing to make plays, but you’re really looking for a guy that you can trust takes care of the ball and understands protection,” Wilson said. “It takes a little bit of time.” … Wilson repeated Ryan Day’s mission that Ohio State find “the best five” for the offensive line. Players he mentioned in the mix, beyond the obvious starters, included Dawand Jones, Matt Jones, Enokk Vimahi and Ryan Jacoby. All but Dawand Jones are guards. “They’re maybe the most competitive group on offense right now with the way they practiced in the winter.”

Friday’s interviews yielded little specific information as to who lined up with the first team on either side of the ball. One exception is free safety, where Coombs said Josh Proctor took first-string snaps, followed by third-year player Bryson Shaw and true freshman Jantzen Dunn. (Marcus Hooker presumably would have been in the mix if not for his indefinite suspension following an OWI arrest.) “(Proctor) played extremely well and is going to play really well,” Coombs said. … Lathan Ransom, one of the only true freshmen to contribute defensively in 2020, will primarily play “cover” safety — which is that same in-the-box role he manned in third down situations late last season. …

Coombs grudgingly adapted to the virtual instruction necessitated by the coronavirus pandemic last year. He’s eager for a more conventional spring and offseason. “For me, being able to look them in the eye and then do it on the field — that’s the thing you miss,” Coombs said. He said the continued ability to work with strength coach Mickey Marotti is also crucial. “So it’s not just the scheme but it’s also their conditioning level — their ability to be in shape when we hit the field in the fall. But this opportunity for us to install what we want to install and get practiced at it and find out what we can do and what we can’t in the package is important.” …

If you’ve never listened to Buckeye Talk, try it now. And subscribe to Buckeye Talk on any of these podcast platforms or wherever you listen to podcasts.

OSU must hold off Florida State and others for 2023 targets Kirkland, Mitchell

Kyle McCord left his comfort zone early, and it might help him be Buckeyes’ next QB

More answers than questions at safety in 2021? Three spring questions

Paris Johnson Jr. will spend his spring inside

The recruiting battle for 4-star running back Nicholas Singleton