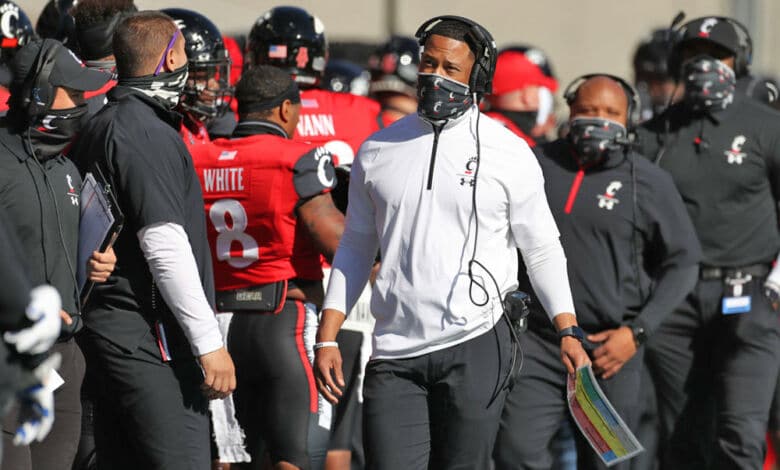 What To Make Of Notre Dame Football’s Recruiting Surge // UHND.com

By far the most intriguing Notre Dame offseason storyline is the machinations around the programs recruiting effort.

Tracing it back, I think we can start with the hiring of new defensive coordinator Marcus Freeman. A significant splash hire is not the norm for the Notre Dame football program, particularly when they are in a battle with SEC programs. The announcement of Freeman was a moment, something you felt viscerally when the announcement came in. Without knowing exactly how it would manifest itself, it was huge, and we knew it.

Ever since then, the momentum has continued to build, especially on the recruiting front. First, it was the surprise turn of the tide with defensive end Tyson Ford, who Notre Dame had fallen out of favor with before Freeman inserted himself and won the recruitment for the top 150 player from Missouri.

Then the offers started rolling in, and it was clear Notre Dame was after the big fish defensively. They went in on a slew of top 100 players, a highly rated USC commit backed away from his pledge, immediately putting Notre Dame in the driver’s seat, and players not thought possible are suddenly very possible. Much like with the signing of Freeman, this all felt like a signal: Notre Dame is doing things differently in 2021.

Finally, Notre Dame secured the commitment of top 150 linebacker Joshua Burnham, right under the nose of Michigan, where Burnham hails from. The momentum is definitely real. So what do we attribute this to? Is it just Freeman, or is there more to what’s happening?

When assessing the state of the Notre Dame program, optimists will see the 43 wins and the multiple playoff appearances as points of pride. Sure, Notre Dame hasn’t ascended to the top of the mountain, but at least they are on the climb. Skeptics will naturally look at the losses, the inability to not only win in the Playoffs but put up a competitive fight. Thing is, that’s just online fodder to get riled up about.

But, objectively speaking, Notre Dame has been a very good program over the last four seasons, and that matters to recruits. This hasn’t been a one or two-year thing. Notre Dame has been good since the current recruiting class entered the 8th grade. That’s a big deal.

It used to be that the phrase “Notre Dame is living in the past” referred to a storied program that was presently a dog. Now it’s those living in the past who can’t see that Notre Dame has been a top-five program over the last four seasons. Marcus Freeman said a lot of the right things when he was hired about Notre Dame and why he wanted to coach at the university, but it’s naive to think Notre Dame’s recent success, the success Freeman can point to on the recruiting trail, is one of the reasons Freeman signed up in the first place.

So much has been said about Brian Kelly the recruiter, but he built the program to be viable for someone like Marcus Freeman to sell, and that’s probably more important.

Marcus Freeman Is A Wild Man

It is also abundantly clear that Marcus Freeman is very different than his predecessor at defensive coordinator, at least from a recruiting standpoint. It’s not certain, but very likely, that Burnham and Ford are not current commits in the Notre Dame class without Freeman. It is likely that without Freeman Notre Dame doesn’t have a chance with top 100 linebackers Jaylen Sneed or Niuafe Tuihalamaka, or top 100 safety Xavier Nwankpa. And yet, here they are, in the thick of it with all of them, if not outright favorites with Sneed and Tuihalamaka.

Freeman clearly doesn’t view many recruitments as though he can’t win them, and he approaches each one that way. It’s a change that was needed if no other reason for the rest of the staff to see it. Although to be completely fair, we do need to see how it all shakes out in the end.

Freeman was billed as a dynamite recruiter, which is how it has played out so far, and while there are lots of factors that go into recruiting, the Freeman effect is easily the most salient. This is why hires of his caliber are so important.

The Shift In Recruiting Coordinator

Mike Elston and Brian Polian essentially switched roles and positions, with Polian becoming associate head coach and Elston taking over as the recruiting coordinator. It’s hard to view this as anything other than Kelly wanting new energy with the recruiting operation and that was fully on display with Notre Dame’s Pot of Gold celebration on St. Patrick’s Day. They sent out a huge number of offers to 2023 recruits, owned the internet with their graphics, and the coaches even got involved with a dance.

It’s unclear what kind of impact it will ultimately have on the class, but similar to the Freeman hiring, it felt like Notre Dame was having a moment. And these moments have happened again and again over the last three months, and it doesn’t seem like it’ll slow down any time soon. So while it’ll be some months before we know what this all adds up to as far as the class, things are happening and it’s been something to watch.

Was the struggling Big Ten overrated all along?