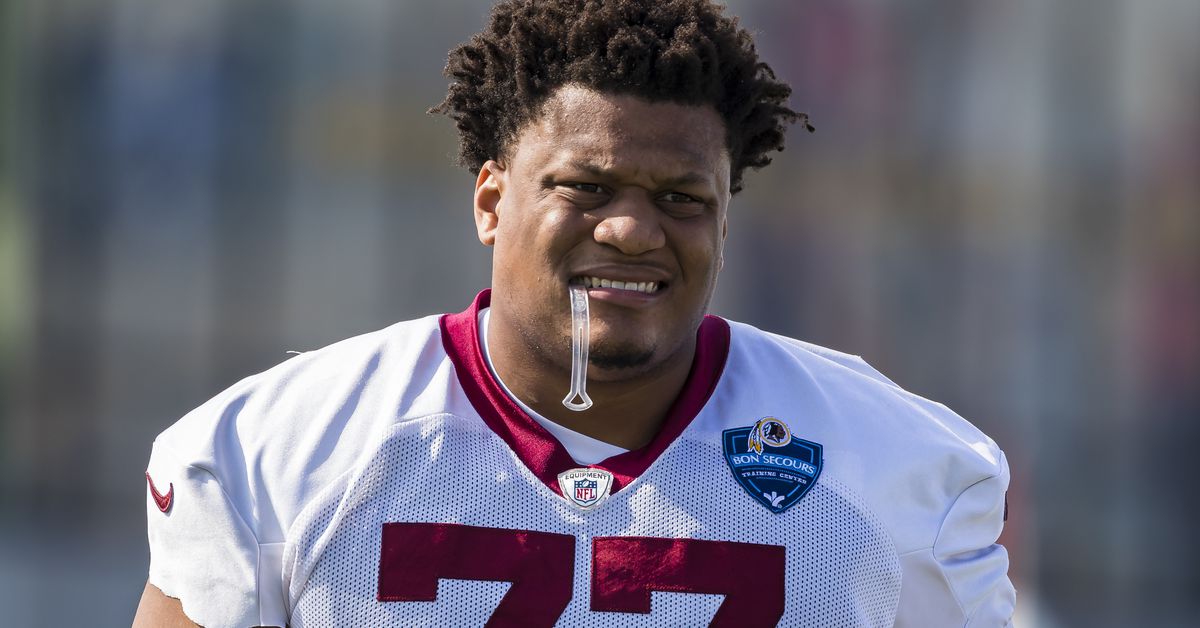 The depth chart for the Washington football team has changed a lot this off-season. Some of the players who have been cut or who have not returned from the 2020 roster include:

More interesting to fans may be the roster additions:

Let’s look at the position groups in thumbnail sketch form with an eye to this weekend’s draft:

Quarterback
The team appears to have a full quarterback room, but with a 16-year veteran in Ryan Fitzpatrick backed up by three unproven and mostly inexperienced young players, the team lacks a long-term solution. There seems to be a good chance that the brainstrust will draft a quarterback; getting one of the top-5 would necessitate a trade up, but the possibility of drafting a player like Davis Mills or Kellen Mond after the first round can’t be discounted. Of course, if the right player isn’t there, the team has the option of punting the selection to next year and rolling with the current QB room.

Running back
The team returns the top-3 backs from last season (Gibson, McKissic and Barber). Also, Lamar Miller has been re-signed. The Bryce Love gamble didn’t pay off. There seems to be a good chance that the team may use a Day 3 pick on a running back, but it doesn’t feel like an urgent need, and the front office may choose to simply round out the running back room with UDFAs.

Tight end
Despite the hype and enthusiasm surrounding the signing of physical specimen and basketball-player-turned-tight-end, Chilean Sammis Reyes, Washington really only has one proven tight end on the roster — Logan Thomas. The team has backups; Marcus Baugh may be the most likely to see the field in the regular season, but the team probably needs to draft a legitimate tight end to bolster the group. I would expect that the 2nd to 4th rounds would be the time we might see Washington pull the trigger on a guy this weekend.

Wide receiver
As with so many positions, Washington looks pretty good if you focus on the starters, but appear to be an injury away from potentially being uncompetitive. The team appears to be set to play Curtis Samuel outside opposite Terry McLaurin, but a look at the slot receiver spot shows that Humphries is signed for backup money, and the other two (Sims Jr. and Carter) are no better than backups.

The entire look of the receiver room could change if Washington is able to draft a speedy receiver to complement McLaurin, allowing Samuel to play predominately out of the slot. Washington doesn’t have to reach here, but if the right player is on the board at the right time, Rivera could very well add an impact player at the receiver position this weekend. If not, then it will be an interesting camp battle for players like Cam Sims, Kelvin Harmon, Antonio Gandy-Golden and Isaiah Wright, at least one of whom is likely to be without a chair when the music stops.

Offensive line
This group appears to have improved with everyone returning and Ereck Flowers being added to the mix this week. Despite the good play of Cornelius Lucas in 2020, he is 30 years old and the team reportedly wants to draft a young stud to play left tackle. Many mock drafters have projected Washington to do just that with the 19th overall pick, but the draft appears to be loaded with offensive line talent, and the front office may be able to wait until Day 2 and still find a player that can take over the position from Lucas later in the season or in 2022. The development of Saahdiq Charles will be interesting to watch this year, as he lost almost his entire rookie season to injuries. Of course, the addition of Flowers also raises the possibility of Washington agreeing to trade Brandon Scherff for draft picks.

As with quarterback and wide receiver, I get the feeling that the team would like to make a move to improve at the left tackle spot, but that they are positioned to be competitive in 2021 even if they can’t, once again setting up a draft where they don’t have to ‘reach’ to fill a position of need.

Edge rushers
The team is loaded, with Montez Sweat and Chase Young comprising what could be the best tandem in the league. James Smith-Williams will be entering his second season in the NFL and his athletic profile makes him look like he has a promising future. The team probably needs to add a young player to this group on Day 3 of the draft. Some fans hold out hope that Ryan Kerrigan could return to the team after the draft if he remains unsigned and the team still has a need for a backup at the position.

Interior Defensive Line
With Jonathan Allen, Daron Payne, Matt Ioannidis, and Tim Settle, it would be hard to find a more talented group of DTs in the league. Still, Settle is in the final year of his rookie contract and may be keen to move to a team where he is likely to get more playing time. The team might want to use a late round pick to draft a potential replacement…or not.

Safety
Last year’s 7th round pick, Kamren Curl may have been the second-best defensive rookie in the NFL after his teammate Chase Young. Jeremy Reaves and Deshazor Everett played well last season. Once again, the Football Team has a chance to upgrade the position if a talented safety is on the board when Washington is picking, but, if not, Rivera and his staff probably have the horses to get through the 2021 season.

Cornerback
Ronald Darby played well in his only season with Washington a year ago. It was disappointing when he left in free agency, but the disappointment was short-lived as the Football Team signed William Jackson III, who appears to be an upgrade. With Kendall Fuller and Jimmy Moreland, Washington can field an adequate set of starting cornerbacks, but the depth is not enviable. The team almost certainly will be looking to add one or two defensive backs this weekend to enhance the depth of this position group and fill the pipeline for the future.

Linebacker
I’m a bigger fan of Jon Bostic than most other Washington supporters are, but even if you count him as a starter-quality linebacker and do the same for Cole Holcomb, that is pretty much the best you can say about Washington’s second line of defense. It’s hard to imagine the coaches seeing this draft as a success if they don’t add a potential starting WILL linebacker and at least one other LB capable of making the 2021 roster. This is the one glaring area of need at the starter level for the Football Team, and the one position that may force the powers-that-be to abandon the best player available philosophy to make sure that the football team can field a potential playoff team in 2021.

Special Teams
We can’t ignore the fact that the team does not have a long snapper after letting Nick Sundberg depart in free agency. No, the team cannot train the backup center to do it and ‘save’ a roster spot. No, the team doesn’t need to use a draft pick; most long snappers enter the NFL as undrafted college free agents.

Takeaway
My biggest takeaway from this depth chart review is that, while the Football Team doesn’t appear to have a Super Bowl caliber roster (yet), the front office and coaches have done a good job making sure that if they had to enter the season with the roster we have today, the Football Team would be competitive. With eight picks in this weekend’s draft, the team has the opportunity, of course, to enhance the roster. Aside from the obvious needs at the linebacker position, it feels as if the decision-makers are in a good position to allow the draft to “come to them” and focus on selecting the best player available with nearly every pick. It should be a fun three days!