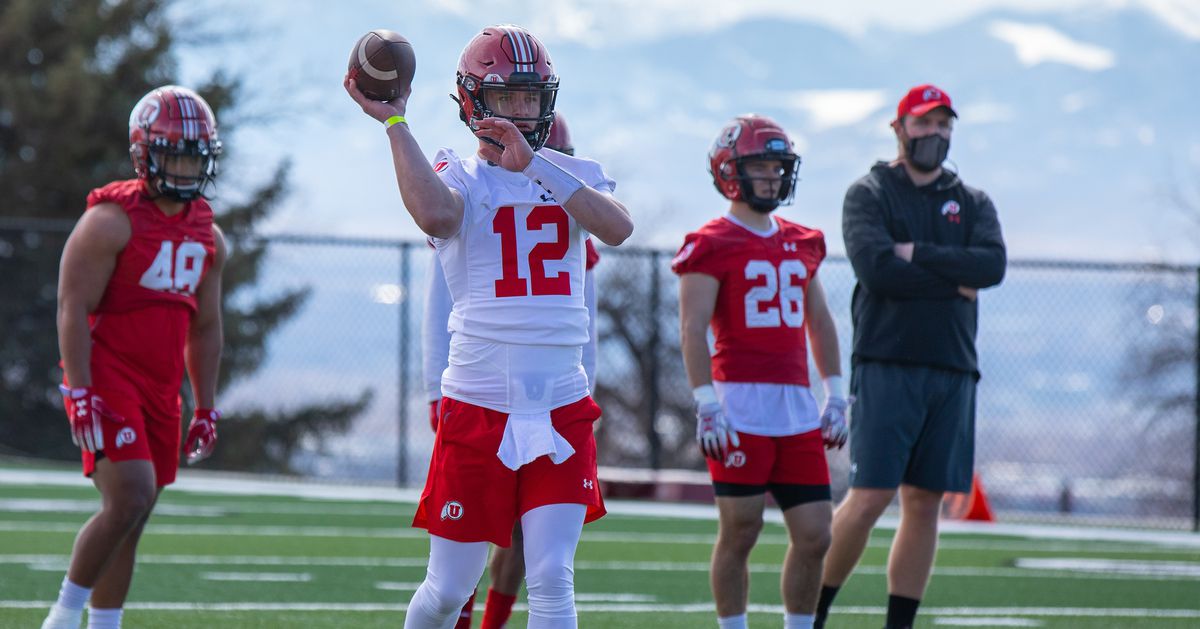 Utah football: Who stood out for Utes during first spring scrimmage?

Utah capped off the first three weeks of practices Friday with its first scrimmage of the spring.

“Outstanding finish to the week. Major scrimmage today. Upwards of about 130 snaps — maybe more,” said coach Kyle Whittingham. “Plus special teams work on top of that. It was a full workday.”

Whittingham was happy to report that his team survived the day relatively unscathed.

“We came out of it healthy. A few bumps and bruises, an ankle or two — nothing major,” he said. “That’s what we’re anticipating right now. That’s a positive. It’s been a very good first three weeks.”

“We came out of it healthy. A few bumps and bruises, an ankle or two — nothing major. That’s what we’re anticipating right now. That’s a positive. It’s been a very good first three weeks.” — Utah coach Kyle Whittingham

During the scrimmage, coaches divvied up reps between five quarterbacks, with Baylor transfer Charlie Brewer getting the “vast majority” of the reps, according to Whittingham.

“And that’s been the case all spring and that will be the case during these last six practices,” Whittingham said. “The other reps were divided almost equally between the other four. Ja’Quinden Jackson and Pete Costelli have gotten more than the other two … throughout the spring. I don’t see that changing in the last six practices.”

As for the running backs, Whittingham said Micah Bernard remains at the top of the depth chart with Oklahoma transfer T.J. Pledger and Louisiana State transfer Chris Curry fighting for the No. 2 spot.

“They’re jockeying for position,” Whittingham said. “One day one of them will have a better practice than the other, then vice-versa.”

Whittingham also mentioned that Charlie Vincent, Elvis Vakapuna and Braedon Wissler are in the mix and taking some reps.

“The top three are getting 75% of the reps overall,” Whittingham said. “We have Ricky Parks this summer to round out that position group.”

Whitttingham said that there were some notable performances Friday.

“Both the offensive and defensive lines performed exceptionally well. That’s hard to say — how can they both be really good? But they were both really good,” he said. “We were physical on both sides of the ball. A lot of cohesiveness on that offensive line. A lot of veterans returning and same on the D-line. That’s going to be a strong suit for us — the line of scrimmage. That’s always a good place to start. It’s a great place to start.”

Meanwhile, he liked what he saw from specific players, including Brewer, linebacker Nephi Sewell and freshman safety Cole Bishop.

“Charlie Brewer was sharp. We expect that, so that wasn’t a surprise. Nephi Sewell made a bunch of plays, which is no surprise. He made a bunch of plays last year for us,” Whittingham said. “Cole Bishop is brand new to the program. He’s really a lot like Nate Ritchie (who has departed for a mission for The Church of Jesus Christ of Latter-day Saints) was for us last year. He came in and made a splash early and played and started the majority of the season. Cole could be in that same situation. We’ll see. But he’s got to fight for it. For a kid that’s only been on campus for a couple of months, he’s doing a really nice job.”

The Utes have been decimated at the receiver position due to transfers and injuries. But Whittingham was encouraged by his wideouts Friday.

“They’re all progressing, doing a nice job. We’re limited there with limited scholarship players,” he said. “We’re way under budget where we should be. We have some guys hurt.”

Whittingham said veterans Solomon Enis and Britain Covey are standing out, as is Devaughn Vele.

“(Vele) is having a very nice spring. He has really started to emerge,” Whittingham said. “We’re going to be OK at that position when all is said and done. Right now, we’re not. We need more depth. We need more playmakers. But I’m confident that we will get to where we need to be, and (new wide receivers coach) Chad (Bumphis) will get us there by Sept. 2.”

That’s when Utah kicks off the 2021 season at Rice-Eccles Stadium against Weber State.