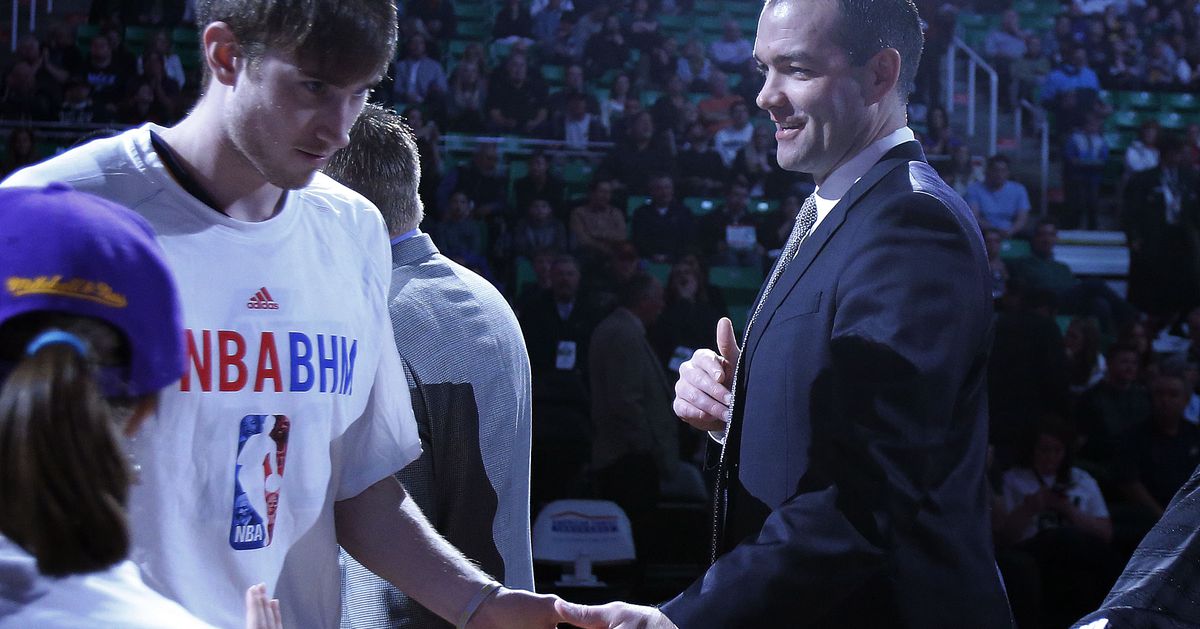 A week after University of Utah basketball coach Larry Krystkowiak was abruptly fired after another mediocre season, the search for his replacement is “well underway,” according to an athletic department spokesperson, but exactly when the new coach will be chosen isn’t clear.

All indications are that the Utes are focusing their most recent efforts on Utah Jazz assistant Alex Jensen, a player from the glory years of Utah basketball when the school routinely made the NCAA Tournament under late coach Rick Majerus.

The Jazz returned late Monday night from an extended road trip, and Jensen was spotted on the U. campus Tuesday afternoon, according to several social media reports. The Jazz will play their next four games at home, beginning Wednesday night against the Brooklyn Nets and concluding Monday against the Cleveland Cavaliers.

Jensen has not responded to repeated requests from the Deseret News regarding his interest in the job.

Jeff Goodman of Stadium reported Monday that Jensen was expected to “formally interview” for the opening with Utah athletic director Mark Harlan this week. He also reported that Utah State’s Craig Smith and New York Knicks assistant Johnnie Bryant, another former Ute, were also “in the mix” for the opening.

The Deseret News has not been able to confirm whether Bryant or Smith have been interviewed.

Sources say that either Harlan or one of his top administrators have personally contacted “eight or nine” players who were part of Krystkowiak’s rotation last season and “pleaded” with them to “be patient” and give the new coach a chance before making a decision whether to enter the transfer portal or stay with the program.

At least one player, forward Riley Battin of Oak Park, California, did not heed their request. Battin, a 6-foot-9, 230-pound rising senior, has entered the transfer portal, a source with access to the portal confirmed Tuesday night.

He’s the fourth Ute to enter the portal since the 2020-21 season began, joining sophomore forward Lahat Thioune, sophomore guard Jordan Kellier and guard Brendan Wenzel. Thioune and Kellier jumped into the portal the day before Krystkowiak was informed he was being let go, while Wenzel left a few days after Christmas. He is reportedly transferring to Wyoming.

It is also expected that senior guard Alfonso Plummer, who is eligible for the “extra year” granted by the NCAA due to the COVID-19 pandemic, will chose to move on, although the native of Fajardo, Puerto Rico, has not publicly indicated anything yet.

As the focus shifts to Jensen, those close to the former Viewmont High star who was chosen as Utah’s Mr. Basketball in 1994 by the Deseret News say he is on the fence. Does he take the $2 million or so a year, or more, currently being offered by the Utes, or stay in the NBA and pursue his hopes of becoming a head coach in that league, where the paycheck will be even higher?

A close friend who wished to remain anonymous estimates that Jensen makes about $800,000 a year with the Jazz.

As his BYU team prepared for an NCAA Women’s Basketball Tournament second-round game earlier this week, Jeff Judkins, said Jensen would make an “outstanding coach” in the college ranks. Judkins was on the Utes’ staff under Majerus from 1989 to 1999 and helped recruit Jensen to Utah.

“I think he would be a really excellent candidate for the job,” Judkins said, noting that he has not spoken to Jensen since the job became open because “both of us are extremely busy right now.”

“I know his name is coming up,” Judkins said. “He is at a good age where he could come in and really do the things that he wants. … I am sure he is thinking about it.”

Judkins, who left the U. in 1999 for BYU but still keeps close tabs on the program, said he would like Utah to hire somebody with local ties.

That said, Judkins knows Jensen “really likes where he is at” with the Jazz.

When Dave Rose retired as BYU’s men’s coach two years ago, Jensen interviewed for that opening but made it clear that he really wasn’t interested in leaving the NBA at that time. Friends say he interviewed just to be nice to an instate program and because he is a member of The Church of Jesus Christ of Latter-day Saints.

In 2014, Jensen married Natalie Hill, a former Broadway singer who was raised in Orem and once authored a blog called “Mormon in Manhattan” about her adventures in the Big Apple.

“Alex wants to be a head coach some day, I do know that,” Judkins said. “It is kinda like me. I was in the men’s game for a long, long time, and then the opportunity came for me to be a head coach on the women’s side, and I took it.”

“I think Alex could be the same way where he has been in the NBA, and then this opportunity comes. There is no doubt in my mind that he would be a great coach at Utah,” Judkins continued.

Barring any more transfers, the new Utes coach will inherit a talented roster, and will have at least four open scholarships with the departures of the aforementioned. Two international players — Norbert Thelissen of The Netherlands and Lazar Stefanovic of Serbia — have signed in the past year and were set to join the team for the 2021-22 season before Krystkowiak was dismissed.

Meanwhile, Krystkowiak has not publicly discussed his firing.

His claims that the program is on the rise despite its 12-13 season have been somewhat validated by the Pac-12’s performance in the Big Dance.

Five teams from the much-maligned Power Six conference were invited to the NCAA Tournament, and all five advanced beyond the first round. Four are moving on to the Sweet 16, which begins Saturday. Pac-12 teams are an amazing 9-1 in the tournament, including UCLA’s 73-62 win over BYU last Saturday.

However, Utah does own a win over Sweet 16 team USC (71-61 on Feb. 27) and took the Trojans to two overtimes in Las Vegas in the conference tournament quarterfinals before falling 91-85 at T-Mobile Arena.

LOOK. Ohio State football has had some crazy speed in recent years