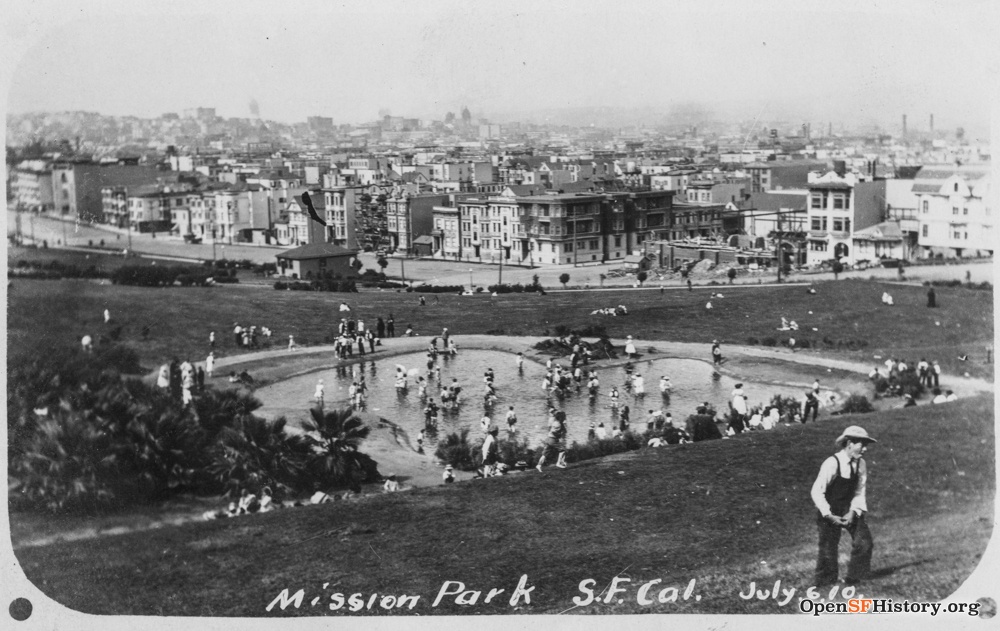 Sure, some 20-somethings may have soaked their feet once or twice in a plastic kiddie pool while sipping frosty Fort Points at the park on a balmy day, but more than 100 years ago, a massive concrete-lined wading pool was a permanent attraction.

The shallow pool was constructed by the city on the south side of the park circa. 1909, three years after the devastating 1906 earthquake, according to the San Francisco Recreation and Park Department. It cost $128 to build, just about what a boutique-shop bathing suit goes for in the 21st century.

The pool lasted until at least the late 1920s, according to Rec and Park, before being converted into a playground that was renovated a handful of times over the decades. Most recently, it underwent a $3.5 million renovation that was completed in 2012 and is now named for the late philanthropist Helen Diller, wife of billionaire real estate developer Sanford Diller.

In the early 1900s, the surrounding Mission District was dominated by Irish and German households with large nuclear families of as many as six or seven children, according to Bill Issel, a professor emeritus at S.F. State University and author of several books on the city’s history including “San Francisco: 1865-1931.”

“A not-very-costly concrete lined pool would be popular with the neighborhood when the city removed the temporary shelters, some tents and some of the ‘earthquake shacks,’ that Katherine Felton built when she was in charge of earthquake relief after the ’06 quake and fire,” Issel wrote in an email, referring to the founder of the Associated Charities of San Francisco who helped relocate people who lost homes in the earthquake in tents at local parks, including Dolores Park.

The Dolores Park swimming pool was one of at least two “informal pools that were freeform and surrounded by rock curbs” that were built in the early 1900s and part of the city’s first public water recreation, according to Rec and Park. Another was built in Golden Gate Park circa. 1909.

After the earthquake, in the 1910s and 1920s, neighborhood improvement associations in the city promoted all kinds of projects, including recreation projects, and they worked with the city Chamber of Commerce, labor unions and the city government to get things done, Issel explained.

“Today’s gridlock and NIMBY and YIMBY fights would have astonished the folks who got the new city hall, civic auditorium, and etc. done back then,” he said. “So one of those voluntary associations in the Inner Mission might have had a hand in the wading pool project.”

Woody LaBounty, president and CEO of SF Heritage, said at the time there was also a shift from seeing parks as natural refuges and instead as places to recreate and for self-improvement.

“Pools started being built as opposed to natural woodlands,” he said. “People were playing ball and swimming.”

San Francisco is going through another major shift in its history as it comes out of a year-long pandemic that shut down the city. Maybe it’s time for another pool at Dolores Park? The neighborhood may think more garbage cans and another pissoir would be a better investment.

No. 5 Vols beat No. 1 Florida to win SEC title
We use cookies on our website to give you the most relevant experience by remembering your preferences and repeat visits. By clicking “Accept”, you consent to the use of ALL the cookies.
Cookie settingsACCEPT
Manage consent