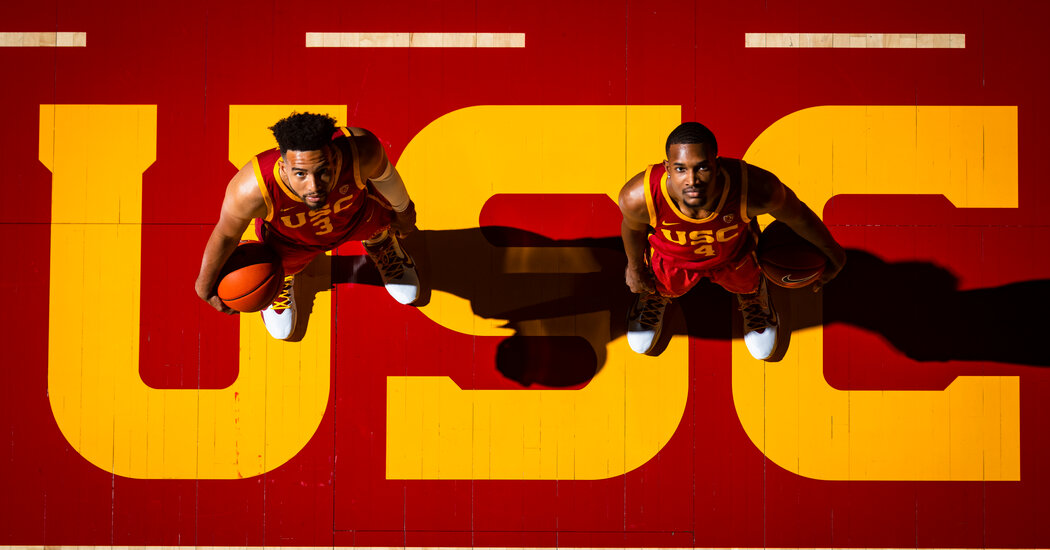 The backyard one-on-one basketball games between the brothers Isaiah and Evan Mobley came to a screeching halt early in their high school days.

Throughout much of their childhoods, Isaiah, older by around 20 months, stood as the more imposing of the two. But in high school, Evan had caught up to him, at least in height.

Sometimes, their father, Eric Mobley, demanded the ball and told them to go inside before the games got too physical. “Evan would be hot, just mad at the world,” Eric said. “And Isaiah was bigger, stronger, so I didn’t want them to get into fights or anything like that. Then, sometimes I’d let them get in there and mix it up a little bit, because they got to settle it.”

They never did really settle it. “It gets too nasty,” Isaiah, 21, said. But instead of battling each other, the brothers are teammates at the University of Southern California, where Eric is still coaching them, as an assistant. The team is a throwback, with the brothers anchoring a rugged defense and providing solid interior play.

A late slip caused U.S.C. to miss out on its first regular-season conference championship since 1984-85, but the Trojans closed play in the Pac-12 Conference with a dramatic comeback win over its crosstown rival U.C.L.A.

Quietly, the Trojans are stitching a sustained run of success as they open the N.C.A.A. tournament Saturday against the winner of Wichita State and Drake.

In Evan, 19, now firmly the tallest of the brothers, U.S.C. has a unique and promising talent who has the prospect of being drafted into the N.B.A. higher than anyone in school history. The program has dabbled with one-and-done players through the years with negligible results. O.J. Mayo’s brief tenure in 2007-8 resulted in sanctions for the program amid allegations that he received improper benefits.

DeMar DeRozan’s lone college season ended in a second-round loss in the 2009 N.C.A.A. tournament to Michigan State, and U.S.C. did not receive a tournament invitation during Kevin Porter Jr.’s 2018-19 season.

U.S.C. seemed to be on its way to the N.C.A.A. tournament last season during Isaiah Mobley’s freshman year and Onyeka Okongwu’s one college season before being selected sixth over all by Atlanta. Mobley came off the bench most of the season and averaged 6.2 points and 5.3 rebounds per game. “He came in and he had no ego, and he tried to do whatever he could to help the team,” U.S.C. Coach Andy Enfield said.

The Trojans were hours away from facing Arizona in the Pac-12 tournament quarterfinals when the coronavirus pandemic forced the cancellation of the competition and the season.

“It all stopped,” Mobley said. “And then we went home, and then they’re just like: ‘It’s over. I don’t know what to tell you. Pack your bags.’ We didn’t know where it was going to go from there.”

Evan Mobley’s senior year at Rancho Christian School in Temecula, Calif., came to a similarly abrupt end. Eric and Nicol Mobley, Evan and Isaiah’s mother, presented them with the options of attending U.S.C., playing professionally overseas or spending a gap season in the G League, the N.B.A.’s developmental league. “We probably talked about it more than they would have liked,” Nicol said. The parents wanted their sons to be aware of their choices and confident in their decision. “The boys were never swayed,” she said.

‘They were kids … no one ever heard of.’

As a couple, Eric and Nicol had bonded over sports. Nicol never saw a rebound she didn’t think she could grab while helping Mount Carmel High School in San Diego to a California Interscholastic Federation championship. “That’s my job,” she said of the mentality she learned then and passed on to her sons. “It goes up, I go get it.”

Eric played in college at Portland and Cal Poly Pomona before embarking on an international professional career in Portugal, Mexico and Indonesia.

That devotion easily transferred to Isaiah. His birth notice announced his arrival and also proclaimed him as a future first-round pick. His first word was “ball.” He didn’t want to leave the gym following his games in early childhood.

Evan didn’t show much interest in the game either way. At the age of about nine, he decided to play on teams with his brother and against older competition. In middle school, he played against children his own age for the first time, providing glimpses of his dominating potential.

The Mobleys introduced their sons to an assortment of sports and hobbies — football, golf, chess, musical instruments. They kept returning to basketball.

“He decides what he wants to try,” Nicol said of Evan. “And then he goes after it wholeheartedly. With basketball, he didn’t really choose to try it because it was presented to him by all of us. So, I think once it was not going along for the ride, just the selection of it, in his mind, then that was the switch for him.

“Somewhere in his mind, he switched from, ‘I play basketball’ to ‘I’m a basketball player.’”

The Mobleys, for a while, played on second-tier amateur teams. “They weren’t the guys that in middle school who everyone knew was going to be who they were,” said Etop Udo-Ema, their longtime coach with the Compton Magic, adding: “They were kids out in the Inland Empire, going to a small school that no one ever heard of.”

Isaiah developed into a five-star recruit. Evan hit his growth spurt at about the same time the one-on-one games became unmanageable, and evolved into the country’s top recruit, a 7-footer capable of still playing like the guard he had been most of his life.

Evan is economical and precise in both his actions on the court and his words off it.

“He’s just such a perfectionist,” Udo-Ema said. “And part of it, the guys that are great, they take chances. They take chances, and I was pushing him to take chances because if you watch his game right now? It’s so disciplined. He doesn’t play out of the box. He’s efficient. But you can find greatness in mistakes.”

‘It’s not an easy dynamic to be a coach-dad.’

The decision to play at U.S.C. together meant entering a season full of unknowns, of trying to find a gym to train at and often settling for an outdoor court while smog permeated the air and the scorching California sun beat down.

As the season began, the pandemic dashed Nicol’s hopes of seeing her family together inside one arena.

Eric, though, has been at their side.

Package deals are nothing new in N.C.A.A. basketball, dating at least back to when Danny Manning’s father, Ed, became an assistant coach at Kansas before his son enrolled in 1984. According to N.C.A.A. rules, universities can hire the parents of a recruit if they are members of the coaching staff.

Of the Mobleys, Eric, in his third season, has been part of the Trojans’ program the longest.

“I have never ever once thought about Eric being the father of these kids,” Enfield said. “I don’t coach everybody the same as the head coach, because everybody has a different personality, but we don’t hold back as the coaching staff. We coach our players without even thinking that they’re related.”

Sometimes, Nicol reminds her husband to drop the coaching lens and reflect on seeing his sons compete at a high level. Other times, Eric senses when it’s best for his sons to receive the message from a different coach, like Enfield or Jason Hart, the associate head coach.

“It’s not an easy dynamic to be a coach-dad,” Isaiah said. “Because I’ve seen a lot of players who have a coach that are their dads, and it can almost ruin their relationship, but my dad does a good job.”

‘They’ll really get to see his bag open up.’

On the season, Evan is the only Division I player averaging at least 16 points, 8.5 rebounds, 2 blocks and 2 assists in becoming the first Pac-12 player to sweep the awards for the conference’s player of the year, freshman of the year and defensive player of the year. (Isaiah averaged 9 points and 7.4 rebounds per game.)

Evan operates under duress, attracting double teams with nearly every step and triple teams at nearly every touch.

“In high school it wasn’t as much help; people weren’t sliding over in the gaps, so I could just take off and go lay it up,” Evan said. “But now in college, it’s more compact and less space.”

That means staying in control while driving, slowing down and staying on two feet, instead of leaping off one leg, Evan said.

“I’m just trying to put everything together more because I know I can be a lot better and grow to be a lot more,” he said.

Analysts have struggled to find a suitable comparison for Evan ’s game. There’s a reason, according to the brother who waged all those backyard battles and would know best.

“I see the comparisons and hear them and stuff, but they’ve only seen surface,” Isaiah said. “They haven’t really seen some of the abilities that he can really do. And I feel like it’s also at the next level where there’s more space, they’ll really get to see his bag open up. He’ll be a one of one.”

Oldest college football player in America is ready for final year
We use cookies on our website to give you the most relevant experience by remembering your preferences and repeat visits. By clicking “Accept”, you consent to the use of ALL the cookies.
Cookie settingsACCEPT
Manage consent