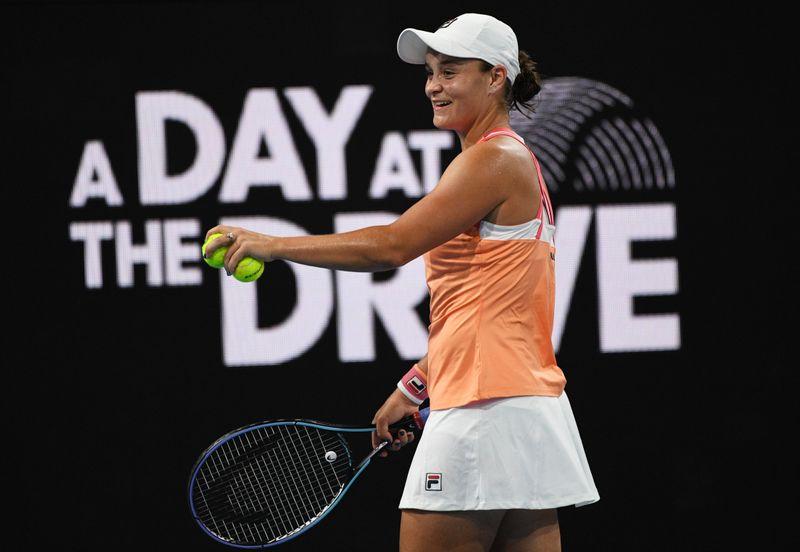 MELBOURNE (Reuters) – Even by the standards of 2020, pictures of Ash Barty cradling a beer at a football match in Brisbane while her tour rivals battled for French Open glory would have been hard to reconcile for some tennis fans.

Perhaps even harder to fathom was that the Australian would finish the year world number one despite declining to play anywhere after reaching the semi-finals in the Qatar Open in February.

The COVID-19 pandemic and the WTA’s rankings rejig have ensured Barty will be nominally, at least, the top dog when she enters the Australian Open next week.

Yet few top seeds can have been so far off the radar of global tennis before competing in a Grand Slam.

Other players have stolen the spotlight in Barty’s absence, notably the 2019 champion Naomi Osaka, who is the bookmakers’ favourite to win at Melbourne Park after claiming her third Grand Slam title at the U.S. Open in September.

When the tour resumed in July 2020, Barty decided to sit out the rest of the year due to Australia’s strict travel restrictions.

While based in her home state of Queensland, Barty was unable to link up with her Victoria-based coach Craig Tyzzer for months as authorities battled to contain a second wave outbreak in southeast Australia.

With COVID-19 now under control in Australia, Barty has enjoyed reuniting with Tyzzer and has had a relatively carefree leadup, training with compatriots free of the constraints of a biosecure bubble.

She has avoided the 14-day quarantine demanded of international rivals after they landed in the country last month.

Twice Wimbledon champion Petra Kvitova felt that could only help Barty’s chances in Melbourne and her bid to end the country’s 43-year wait for a home winner.

“I think for me it’s not an advantage, it’s not a disadvantage,” she said.

“It just is what it is. It’s a situation that we’re dealing with now. I think in a week’s time when everyone is preparing for the Australian Open, everyone will be ready to go regardless of their preparation.”

While not quite the tennis maverick like fellow Australian Nick Kyrgios, Barty has trod her own path to the top of the sport and made no apologies for it.

As a hugely promising tyro, she was quickly jaded by the grind of the tour and dropped out of it altogether at the age of 18, to experience life as a “normal teenaged girl”.

She transformed herself into a professional cricketer for a season before returning to tennis after about a year-and-a-half, a break she credited for her subsequent rise in the game.

“I think there was nothing bad that came out of 2020 from a personal sense for me,” said Barty, who savoured time at home with family and friends.

Reporting by Ian Ransom in Melbourne; Editing by Pritha Sarkar

So many events in Melbourne, until COVID disrupted the plan