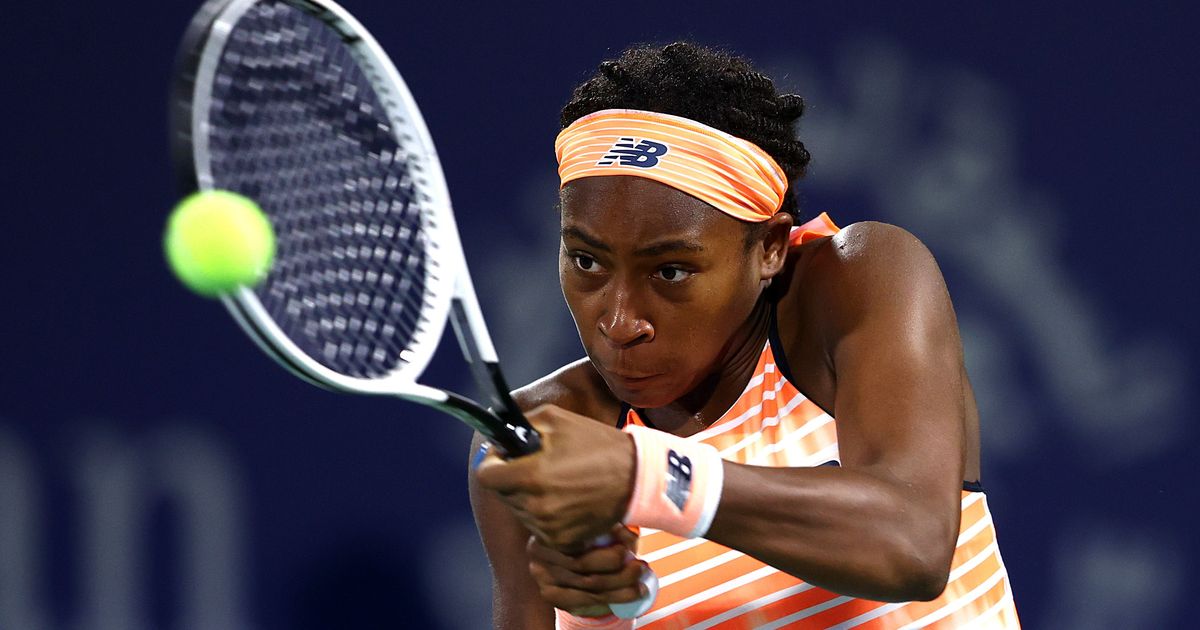 The third day of the Dubai Duty Free Tennis Championships kicked off with a trio of three-set rollercoasters and two upsets of seeded players at the hands of teenage wildcards.

Tuesday’s schedule featured all 16 second-round matches and promised no shortage of drama. Within the first three hours, 16-year-old Coco Gauff came back from a set down to beat No.12 seed Marketa Vondrousova 3-6, 6-0, 6-4 and Anastasia Potapova, 19, dispatched No.11 seed Madison Keys 6-4, 6-3.

Two seeds did survive openers against opponents who have historically troubled them, but neither No.2 Karolina Pliskova’s 6-3, 6-7(5), 6-2 defeat of Anastasija Sevastova nor No.6 Belinda Bencic overhauling Veronika Kudermetova 6-4, 5-7, 6-4 were remotely straightforward. Pliskova had to recover from missing two match points in the second set, while Bencic needed five match points to seal her own win.

Gauff winding up in a decider was little surprise. The American has now played 25 three-setters in her 60 WTA main draw and qualifying matches, including her last seven straight. It’s territory where Gauff thrives, with today’s result extending her record in final sets to 17-8, and she shrugged off the pattern afterwards.

“It doesn’t bother me,” Gauff said. “Obviously I like to close in two, but a win is a win and if it takes three sets, I’m willing to play three sets.”

Indeed, it was Gauff’s ability to find her best tennis in the tightest moments that was crucial against Vondrousova. Initially, the Czech dominated with her heavy topspin to move up a 4-1 double break – but Gauff adjusted to her opponent’s game while improving her own serving. Thereafter, though the run of play remained tight, it was the younger player who won 17 of the remaining 23 games.

Gauff’s fortitude was exemplified during a second-set whitewash whose scoreline belied how close both players’ levels were to each other. Five of the six games went to deuce, but Gauff’s stranglehold on it had begun before the first changeover. An extraordinary passage of play saw 12 deuces across the first three games, with Gauff saving four game points in the first and four break points in the second before sealing the double break on her seventh break point in the third.

“I fight fire with fire.”

Tension mounted between the competitors in the third set, but Gauff’s implacable ability to raise her game stood her in better stead to win the battle of wills – and her fifth career Top 20 victory. Vondrousova, by contrast, was repeatedly unable to find her biggest shots when up game point, and was undone by a total of 10 often ill-timed double faults.

“I was asking when you toss the ball, are you allowed to catch it with your racquet,” explained Gauff regarding an on-court disagreement. “I thought you had to catch it with your hand or let it bounce first. The umpire said it’s allowed if it’s not a motion. It wasn’t meant to make her upset, it was just asking the question. I left it there but I could tell she was a bit frustrated by that.”

The rising intensity did not bother Gauff, though – quite the opposite.

“My personality, I fight fire with fire,” she smiled afterwards. “I lost the last two points of that game and she had wild screams – and I like to scream, so I screamed back.”

Gauff’s fellow former junior World No.1 Potapova also impressed in posting her third career Top 20 win, and first since 2019, over Keys. In a match that saw 12 breaks of serve, the Russian was always in front. Soaking up her opponent’s power, Potapova proved increasingly able to move Keys around the court before delivering knockout forehands as the contest progressed.

Coming into the day, both Pliskova and Bencic trailed in their respective head-to-heads against their unseeded opponents. Pliskova had lost to Sevastova at Moscow 2015 and Madrid 2017, but seemed to have the measure of the Latvian’s wiles as she advanced to a 6-3, 5-3 lead.

At that point, Pliskova had not dropped her serve since the third game of the match. Serving for victory proved more complicated, though. Sevastova saved two match points, one with a dead net cord, and then recovered from 1-4 down in the ensuing tiebreak as Pliskova descended into inopportune double faults.

A runner-up in Dubai to Simona Halep in 2015, Pliskova nonetheless righted the ship in brisk fashion. Putting the second-set drama behind her, the former World No.1’s forehand was back at its best as she swept through the decider.

Kudermetova has long been a thorn in Bencic’s side, having scored three wins over the Swiss player since 2018. The pair’s sixth encounter was their fourth three-setter, but after two hours and 38 minutes it was Bencic who emerged on top of a dramatic dénouement, taking her fifth match point with a 13th ace.

Subsequently, qualifier Tereza Martincova scored a career-best win to upset No.5 seed Kiki Bertens 6-1, 6-4. The Czech had needed three sets to get past each of Lucie Hradecka, Lesley Pattinama Kerkhove and Kristyna Pliskova this week, but took only one hour and 18 minutes to notch the second Top 20 win of her career. Bertens, who won only two games against Jelena Ostapenko in Doha last week, remains in search of her first win following Achilles tendon surgery last October.

No.3 Aryna Sabalenka became the first seed of the day to progress in straight sets, dispatching Alizé Cornet 6-2, 6-4 in one hour and 24 minutes. The Belarusian, champion in Abu Dhabi in January, bounced back from an opening loss in Doha last week to Garbiñe Muguruza to strike 27 winners against Cornet.