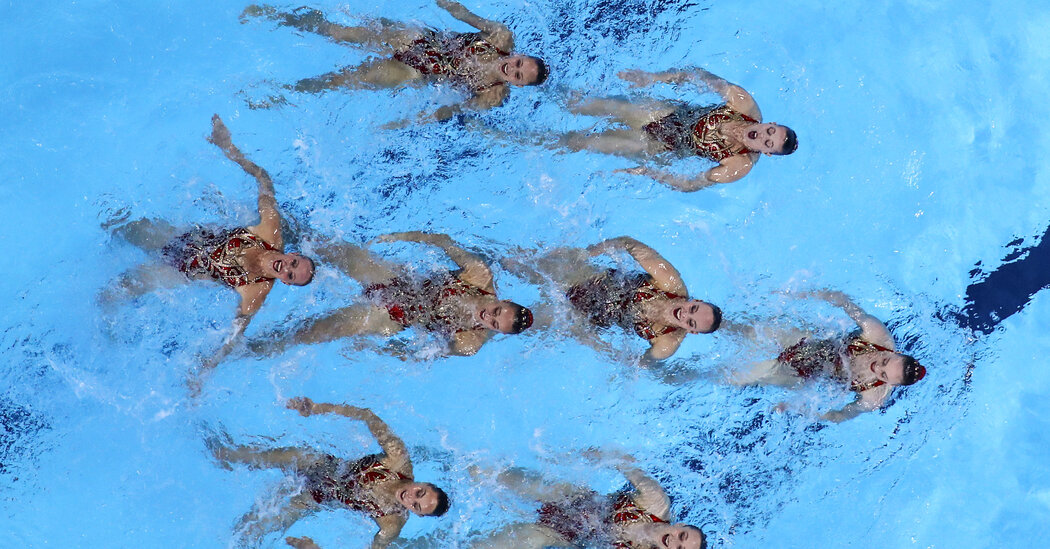 A few years after competing in synchronized swimming at the 2012 London Olympics, Szofi Kiss of Hungary began working with a coach from Russia, whom she would identify only by her first name as Natalia. The coach, Kiss said, separated some members of her training group into what she called the “Chubby Team,” sometimes withheld dinner from them and told them, “You disgust me,” and “I’m nauseous looking at you,” when the swimmers exited the pool after workouts.

Natalia Tarasova, the head national team coach during that period and the only coach named Natalia listed in the Hungarian artistic swimming federation’s meeting minutes for those years, did not respond to requests for comment. But elite synchronized swimmers — who are mostly women, with few men at the elite level — routinely endure bullying, harassment and psychological abuse from male and female coaches, more than 100 current and former athletes from more than a dozen countries have said in recent interviews with The New York Times and other news organizations, and in social media postings and blogs.

With the rescheduled Tokyo Olympics approaching in July, artistic swimming, as the sport is now known, finds itself awash in scandal that burst into public view recently in Canada and in a handful of other countries.

Swimmers interviewed described an unhealthy culture of thinness and disordered eating in an event that inevitably foments tension between art and sport. Artistic impression, looks and body line figure into the judges’ scoring.

“If you’re not tall and super skinny — basically if you don’t look like a model — with light skin, you have no chance to get to the top level,” said Myriam Glez, 40, a former chief executive of USA Artistic Swimming and a two-time Olympian.

Katie Spada, 28, of the United States said that she was sometimes called a “dying whale” by a former coach and, at 13, was told “I had boobs like Marilyn Monroe and they were getting in the way.”

Such remarks “felt very inappropriate and yet were just normalized at practice,” Spada said.

Research published as a graduate thesis at U.C.L.A. by Alison Williams, 31, a former elite artistic swimmer, indicated that nearly two-thirds of American national team members between the 1990s and 2019 who responded to her survey had been professionally diagnosed or self-diagnosed with depression.

“All the athletes have experienced some level of emotional abuse,” Williams wrote.

Kiss’s coach at the 2012 Olympics, a fellow Hungarian named Gábor Szauder, one of the few male coaches at the elite level, is now under intense scrutiny as the national coach for Canada Artistic Swimming. Last fall, he was accused by five swimmers of making sexist remarks, weight-shaming athletes and committing other troubling behavior. He has since faced similar criticism from swimmers and officials in Slovakia, where he coached from 2013 to 2018, before leaving to coach in Canada.

On Tuesday, a lawsuit was filed in Montreal by five former elite swimmers, accusing Canada Artistic Swimming, the national governing body, of failing to provide a safe environment and of neglecting abusive behavior by Szauder and previous coaches.

Canada Artistic Swimming and Szauder have denied wrongdoing. They did not immediately respond to requests for comment about the lawsuit. Szauder also did not respond to previous attempts to reach him. Swimming’s world governing body, known as FINA, also did not immediately respond to a request for comment about the lawsuit or to multiple requests to comment on the troubled state of artistic swimming.

The lawsuit — which seeks class-action status and financial compensation for “moral damages” — reflects an attempt to clean up a sport seeking to change its image after coaches were accused of mistreating athletes in Spain, Mexico, the United States and other countries. Swimmers increasingly appear less willing to subject themselves to degrading treatment from coaches, whose behavior is often described, in part, as a remnant of tactics employed in the former Eastern bloc and in China, another artistic swimming power.

Artistic swimming was introduced to the Olympics in 1984, and Russians have dominated, winning every team and duet competition since 2000. Many top coaches are from countries that were once in the Soviet sphere of influence. Background checks are not uniform across countries, officials say. Accused coaches often move from country to country with little or no consequences.

Adam Andrasko, the current chief executive of USA Artistic Swimming, said he took the job in 2018 knowing that the sport as a whole “needed to have a different cultural view.” Efforts in the United States and elsewhere have included diversity campaigns, nutrition seminars and developing an athletes’ bill of rights.

Until recently, artistic swimmers — superb athletes able to hold their breath for more than a minute while performing routines — tended to keep quiet about abusive treatment from coaches. They ascend to the elite level as teenagers and say they often feel powerless approaching officials, who can seem more concerned with results than with protecting athletes. To complain is to risk losing funding and a spot on the team. But that reluctance to speak out has begun morphing into a bold awakening.

Last September, Canada temporarily closed its national artistic swimming training center in Montreal after athletes and some club coaches complained about a toxic practice environment there. Five swimmers came forward to the Canadian Broadcasting Corporation and accused Szauder of making inappropriate sexual remarks and shaming athletes about their weight to the point that they had panic attacks. He was also accused of making Islamophobic remarks like saying all Muslims are extremists and telling the swimmers they should learn how to cook and clean for their men or they would not be wanted.

One swimmer who spoke to the CBC, Sion Ormond, 21, is a plaintiff in the lawsuit against Canada Artistic Swimming. Ormond said in an interview with The Times that Szauder, unhappy with a warm-up at a 2019 competition in China, told the swimmers “if we kept swimming like that, he would hit us so hard, we wouldn’t know what happened.” It was later suggested that Szauder meant he would hit the swimmers with difficult practices, but Ormond said she felt physically threatened.

In another incident, Ormond said that Szauder told her, “Sion, zip up your hoodie before I get too excited.” Such behavior by Szauder was excused by Canadian officials, Ormond said, as a cultural difference because he was European. She retired last summer because she found the training atmosphere unbearable.

Viktoria Reichova, 19, a swimmer who clashed publicly with Szauder after being suspended, told one newspaper that he sometimes referred to the Slovak athletes as “little pigs.” The parent of another swimmer said that some athletes essentially ate nothing but nuts for days at a time, fearing being called fat during weigh-ins.

Anton Siekel, president of the Slovak Olympic Committee, said in an email to The Times that complaints about Szauder’s “behavior and strange attitude” toward training had been lodged by multiple parents and swimmers there, helping to prompt an initiative for providing safe sport. “I’m glad we’re not afraid to talk about problems like this in sports anymore,” Siekel wrote. “Harassment, intolerance and violence have no place in sport.”

Some current and former swimmers remain supportive of Szauder. Kiss, the Hungarian swimmer who was coached by Szauder during her teenage years, said she experienced none of the behavior that Canadian swimmers have alleged. She said Szauder was a father figure who elevated her career to Olympic status and described his coaching style as “completely normal.”

Canadian artistic swimmers have made it clear that abusive behavior by coaches and body-shaming began before Szauder became head coach of the national team. An Instagram account, @mental_abuse_nac, was recently created for athletes to express their concerns. More than 50 responded anonymously.

Gabriella Brisson, 27, a plaintiff in the current lawsuit, said in an interview that a former Canadian national coach once suggested she move to Africa to lose weight.

Geneviève Peel, 26, a medical student and former elite Canadian artistic swimmer, wrote a series of blog posts in October, describing the despair that left her sitting on the edge of chairs so her thighs would appear thinner, counting the exact number of almonds she had for a snack and developing an “overwhelming” fear of gaining a single pound.

Eventually, Peel wrote, she developed an acute generalized anxiety disorder that required three trips to the emergency room in an ambulance, psychotherapy and medication that she still takes. “Synchro taught me that I could never be enough,” to “hate my body” and that “my sanity was less important than my performance,” she wrote.

More than 50 artistic swimmers from 16 countries were interviewed by The Times. Some told of being pushed into uncomfortable stretching positions, like splits, until they cried. Spada, of the United States, said that at age 13, she was once pushed down so hard by a coach that she needed hip surgery.

Spoons, scissors and other metal objects used as tapping devices for swimmers to hear underwater are sometimes thrown at athletes by upset coaches. And swimmers sometimes have skewers for roasting marshmallows taped to the back of their legs during workouts. The skewers can stab if the legs are not kept straight while rehearsing routines.

Olivia Zhang, 30, who formerly competed for the Chinese national team, said her coach used a metal rod to hit her knee when her leg wasn’t fully extended out of the water in training, leaving a scar. “Every time I look at it, it just brings unpleasant memories,” Zhang said.

Teresa Ixchel Alonso García, 24, who competed for the Mexican national team for 12 years, said that in 2019 she was hospitalized for internal bleeding related to stress from swimming, but was pressured to compete by her coach.

“Many times then, I could have collapsed, but I could tell from the look on her face that it didn’t matter to her at all,” Alonso García said of her coach.

Anastasia Gloushkov Leventhal, 35, competed in four Olympics for Israel. Her mother, who is from Moscow, coached her and their relationship remained strong. But Gloushkov Leventhal said she realized that athletes from other countries often do not have the same satisfying experience.

“You don’t want to give up on this golden dream,” Gloushkov Leventhal said, “but at what cost?”

Update on the latest sports