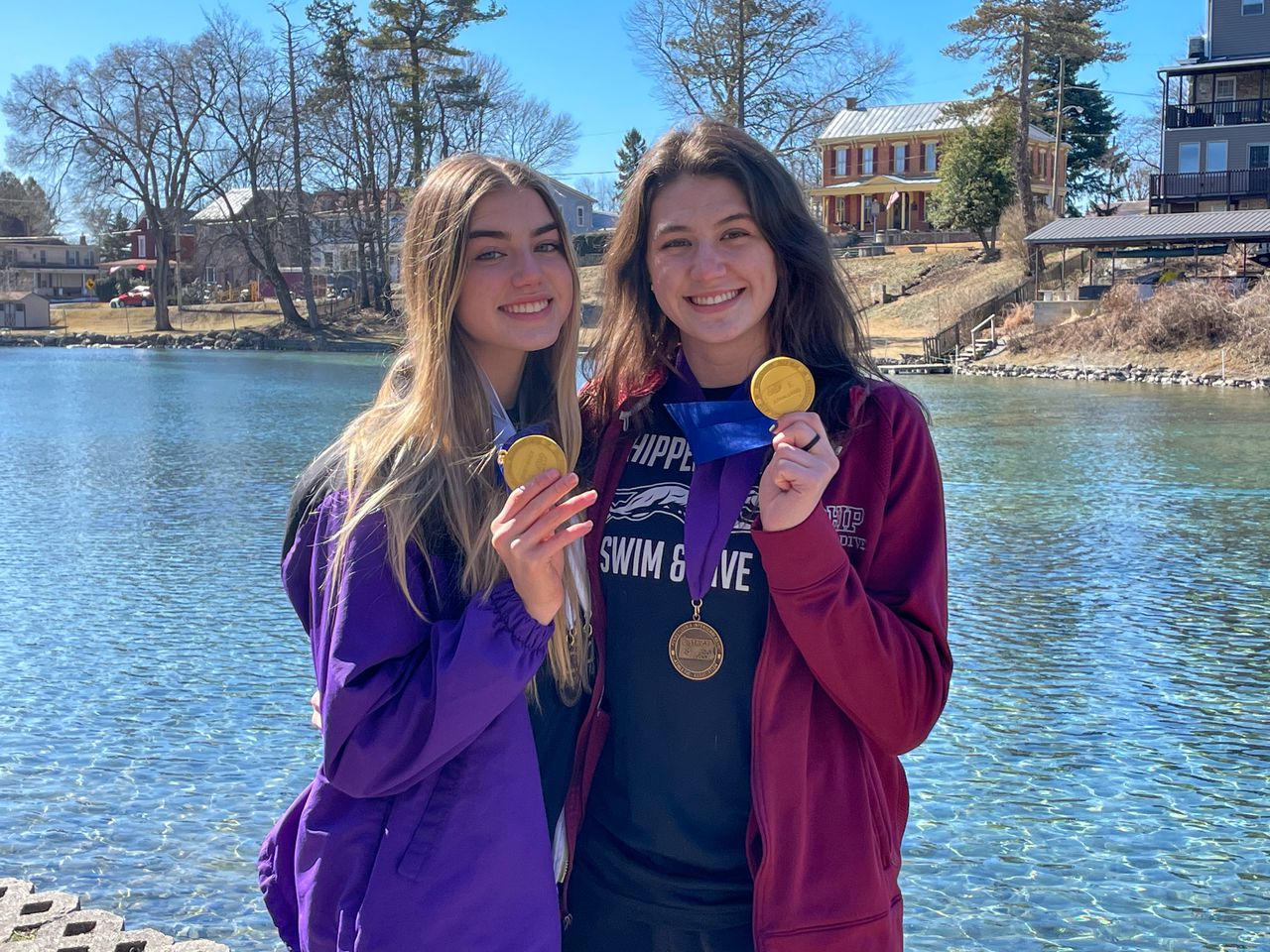 Julia and Jillian Strine are two of the best swimmers in Pennsylvania, and that might have had folks seeing double on the road to the PIAA state championships at Cumberland Valley if not for one big change in their lives.

When they hit the pool this weekend in search of gold, they will do so for different teams.

Julia, a senior, took the top spot in the 100-yard breaststroke in the District 3 3A championship meet for Shippensburg. Jillian, a sophomore, was first in the 50 free at the District 3 2A meet for Boiling Springs.

So, how did the two standout sisters end up in opposite pools?

Dr. Matt Strine, their dad, was hired back in 2018 to become superintendent by the South Middleton School District and immediately brought his son, Joven, to the school district. At first, his two daughters decided against the move. The pair had spent their entire lives swimming together, and last season, helped Shippensburg dominate in the 200 medley and 200 free relays, as well as in individual events.

But when the family closed on a house in April 2020 and moved in later that summer, the transition appeared imminent. Julia, a senior who will swim collegiately at Ohio University, decided to stay with the Greyhounds — mom, Karen, is a teacher at the school — to finish her career.

Jillian, however, decided she was ready to make the change, and she, her dad and brother moved into the Carlisle home, while Karen and Julia remained in the Shippensburg house through the remainder of the school year.

And so it has been a season unlike any other for the Strine family heading into this weekend. And, perhaps, the District 3 championships highlighted that best. When Julia climbed out of the pool following cool-downs at Cumberland Valley, she couldn’t look up to the board to see how Jillian had done.

Instead, her coach, Chandler Johnson was waiting to ask if she wanted to hear how her younger sister’s results.

“Well, yeah I want to hear how my sister did,” Julia said.

And that’s how she learned that, 30 miles away at Central York, Jillian had already punched her ticket to the 2A championships. That new dynamic hasn’t always been easy for the duo.

“So, it’s all very different.”

An extra curve was thrown their way, too, when Shippensburg moved up to 3A prior to the season. Not only would they be on different teams, but they would also be in different classifications. So, their paths wouldn’t cross, in the pool, quite as much.

Outside the pool, with the families split up into two different homes, there has been a lot of FaceTime minutes and a lot of shifting around of household chores. The families visit each weekend in Carlisle, but for the most part, family interactions come largely over the phone.

And on race days things have been really interesting.

“I would have two computers up here in Shippensburg and I was able to watch both meets so we didn’t really miss them,” Karen said. “Their grandparents are big supporters and followers so I would have to send out the links to them to have them ready. And to know what Julia was swimming and what Jillian was swimming, I would have to make little cards and I would screenshot the cards so the grandparents knew what they were swimming.”

Throughout it all, though, the connection and support for one another has never been stronger.

“Her spirit and motivation and her determination always made me and then the teammates around us better swimmers, so not having that was definitely a change,” Julia said. “But, I know that watching her thrive at her new team — and she has a great relay team — and see her do all these other great things, it’s great that she did move on and she was on to bigger and better things.”

The change did mean the sisters faced off once on the road to this weekend.

Back on Feb. 9, in a dual meet between the two teams, Julia placed just ahead of Jillian in the 50 free with a time of 24.78 to Jillian’s 25.43. But the Bubblers knocked off Shippensburg in the 200 medley and 400 free relays the two competed in.

“It was kind of weird because for the first time, she wasn’t on my team. Like, we were racing each other,” Julia said. “But it was fun. It definitely motivated me in that 50 free because I didn’t want to lose to my sister who’s two years younger than me.”

This weekend will be another different moment for the pair. They will be on different teams, but they will be on the same team, too. Because “Team Strine” has made it through the season just fine, and has hopes of finishing things out with a couple medals to show for it.

Jillian is up first, hitting the pool Friday morning, swimming in the 50 free and Boiling Springs’ 200 and 400 free relays. And her family will get together, just like they will for Julia in the 100 breaststroke on Saturday, to watch her go for the gold.

“We will all be at home, screaming at the TV for Jillian to swim fast in her 50 free and in her relays,” Julia said.

The Knickerbocker Field Club, a Hidden Tennis Club in Brooklyn