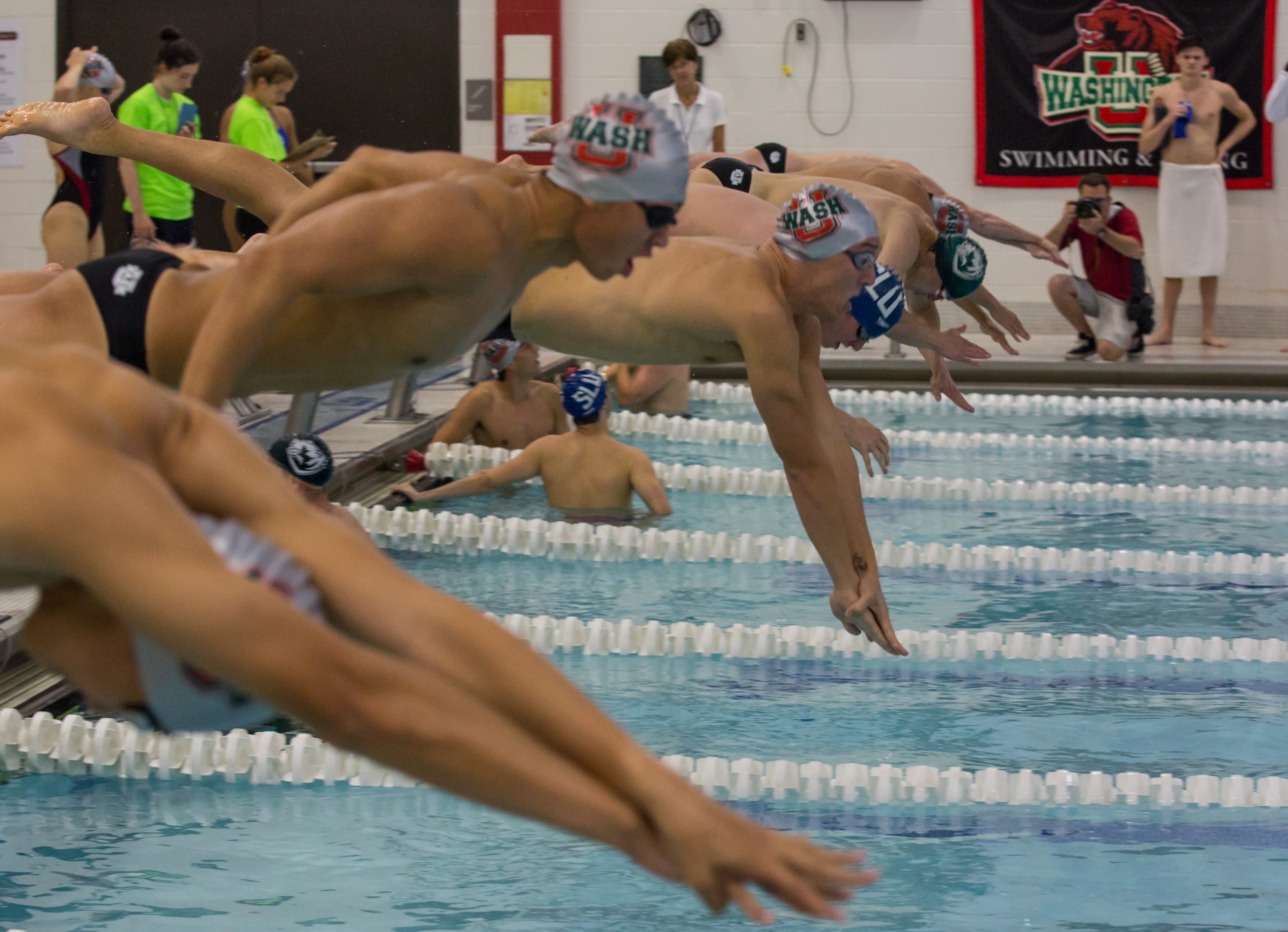 But training with no set competition in sight has been training nonetheless.

Washington University swimmers dive into the pool at a meet against Saint Louis University in 2018.

According to head coach Brad Shively, the team has been training with smaller numbers of athletes at any given time due to COVID-19 protocols. “It’s also allowed for more individualized training and feedback,” Shively said.

For athletes in St. Louis, the University’s athletic facilities have been open, but in-person activities have been limited. Instead of holding full team practices, the swimming and diving team has met in 16 person groups—two people per lane of their practice pool. From their small groups, the members of the team have maintained a connection across the squad.

“If there was a set that there was a particular time that was thrown down in the morning, they would write on the board for the afternoon people to get inspired by,” senior Matthew Yang said. “We try different ways to still stay together and also find effective ways to kind of build and maintain that team culture.”

Even as the Bears have found new ways of building connections, preparing for competitions has still been tough. “Distancing and masks have meant that many things we have done in preparation for competitions have had to be done in a different manner,” Shively said.

For swimmers and divers who aren’t on Wash. U.’s campus, training has been an even more difficult task. At home in Boston in the fall, senior Matthew Grottkau found that most of the pools around him were indoor pools. Almost every one of them was closed.

“Coming back, I was pretty out of shape,” Grottkau said. “It’s in no way the same as training with the team [and] having that kind of constant coaching, that continued dynamic and the continued conversations and stuff that you have with your coaches.”

Grottkau said that getting close to coaches was an important key to success. “I think both swimming and diving are two sports where you start to develop significant relationships with coaches, where they know what needs to be improved, how it’s best to improve it and the stuff that you’ve already tried and taken,” he said. “I think when you’re trying to train on your own—especially when you’re out of the water—it’s very hard to see the same kind of progress.”

To Shively, the swimmers and divers have met the challenge their circumstances create. “Despite all of the unknowns, they have displayed a tremendous work ethic and commitment to making us the best team we can be,” he said.

It’s possible that the race will come—the national championships may happen. The team competed in virtual competitions in the fall and Shively says the team will consider doing more virtual competitions in the spring. But more than the race, what continues to motivate the swimmers is dedication and gratefulness to the team itself and the sport itself. Grottkau—the lone male diver on the team—was injured at the end of last season. After so long without competing, Grottkau is embracing his final months as a competitive diver.

“Coming back after more than a year, I knew that I would only have a couple months left with this sport,” he said. “Let me tell you: Diving is not something that you can do once you’re out of college. I just wanted to make the most of it and really hit it with what [I’ve] got to be able to experience it as much as I can, as best as I can.”

In his final year as a competitor, Yang is focusing on being the kind of leader that inspired him earlier in his career.

“I’ve had the blessing of so much leadership, so much friendship, relationships with prior swimmers who are now alumni; they really changed who I am for the better,” Yang said. “All the successes I’ve had, I give a majority of that to the people that surround me so I want to be the same person to other people. And that means still showing up, inspiring other people to practice because other years still have, potentially, future seasons. But as a senior, as a captain, I really want to make sure that I’m paving the way for other people to succeed in the future, just like others have done for me.”