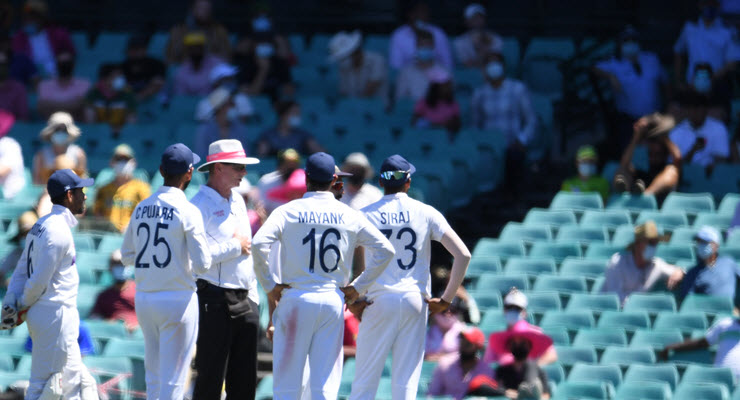 An incident of alleged racial abuse at the SCG on Sunday was just the latest in a long history of racism in Australian sport.

The alleged racial abuse aimed Indian players at the Sydney Cricket Ground (SCG) on Sunday is just the latest incident in Australia’s various sporting codes. There is an investigation ongoing into the precise nature of the incident, but Australia’s history gives us no reason to doubt the Indian players’ claims.

To pick a handful of incidents: bananas were thrown at West Indian-born Englishman Gladstone Small (which would be echoed nearly 30 years later in the treatment of AFL player Eddie Betts); the “go home curry munchers” banners; the hectoring of Adam Goodes for having the temerity to point out racial slurs.

Of course, Australia is far from the only country to wrestle with racism in sport.

Racial abuse has increased at UK football games — ironically, this has largely been in response to the league’s support of the Black Lives Matter movement. European football has been rife with abuse for a long time. Even Indian players themselves have been accused of using racial slurs.

Victoria University Institute for Health and Sport research fellow Matthew Klugman tells Crikey that there isn’t a lot of research comparing Australian sports fans to those in other countries.

“Obviously it’s a difficult thing to objectively quantify — a lot depends on which players speak up and the culture of the of the players in different leagues,” he said.

“But it’s fair to say Australian cricket is still a place of systemic racism — as is Australia at large, the fan culture just reflects this.”

There is a real dearth of research into systemic racism in Australian cricket, Western Sydney University Institute for Culture and Society associate Dr Keith Parry says.

“In terms of Australian cricket, there is not much research on it generally,” he said. “However, the culture of cricket in Australia is deeply rooted in traditional (masculine) Australian values and these are heavily influenced by Anglo-Celtic ideals that make the acceptance of those that do not fit with these harder. The lack of diversity within national cricket sides may be an indicator that there is still work to be done on the culture of the sport.”

Klugman agreed that race was woven into the origins of cricket.

“In the mid to late 1800s there were lots of concerns about white men not being able to survive Australia’s climate — worries they were too weak,” he said.

“So when they started beating England in the cricket, it uplifted white men in Australia, convinced them they were just as good and strong as white men in England. The sense that sport redeems white Australia was there, and elements of that remain to this day.”

University of the Sunshine Coast researcher David Utting examined how Cricket Australia until very recently aligned itself with Howard-era notions of Anglo-Australia rather than embracing multiculturalism. Utting notes that between 1946 and 2015, there were only 10 Test players for the Australian men’s team whose lineage was not ultimately British.

Even since then, players like Usman Khawaja have criticised Cricket Australia’s approach to multiculturalism and race.

“The sense that cricket lags even behind other codes [on issues of race] is probably true. Historically it’s been a much whiter sport than the various football codes,” Klugman said.

“So that may be why the lack the language to acknowledge the systemic nature of these problem.

“They’ve been doing some work, for example bringing in the Johnny Muller medal, but there’s a long way to go.”

Here at Crikey, we saw a mighty surge in subscribers throughout 2020. Your support has been nothing short of amazing — we couldn’t have got through this year like no other without you, our readers.

If you haven’t joined us yet, fetch your first 12 weeks for $12 and start 2021 with the journalism you need to navigate whatever lies ahead.

Why It Is Worth It
We use cookies on our website to give you the most relevant experience by remembering your preferences and repeat visits. By clicking “Accept”, you consent to the use of ALL the cookies.
Cookie settingsACCEPT
Manage consent