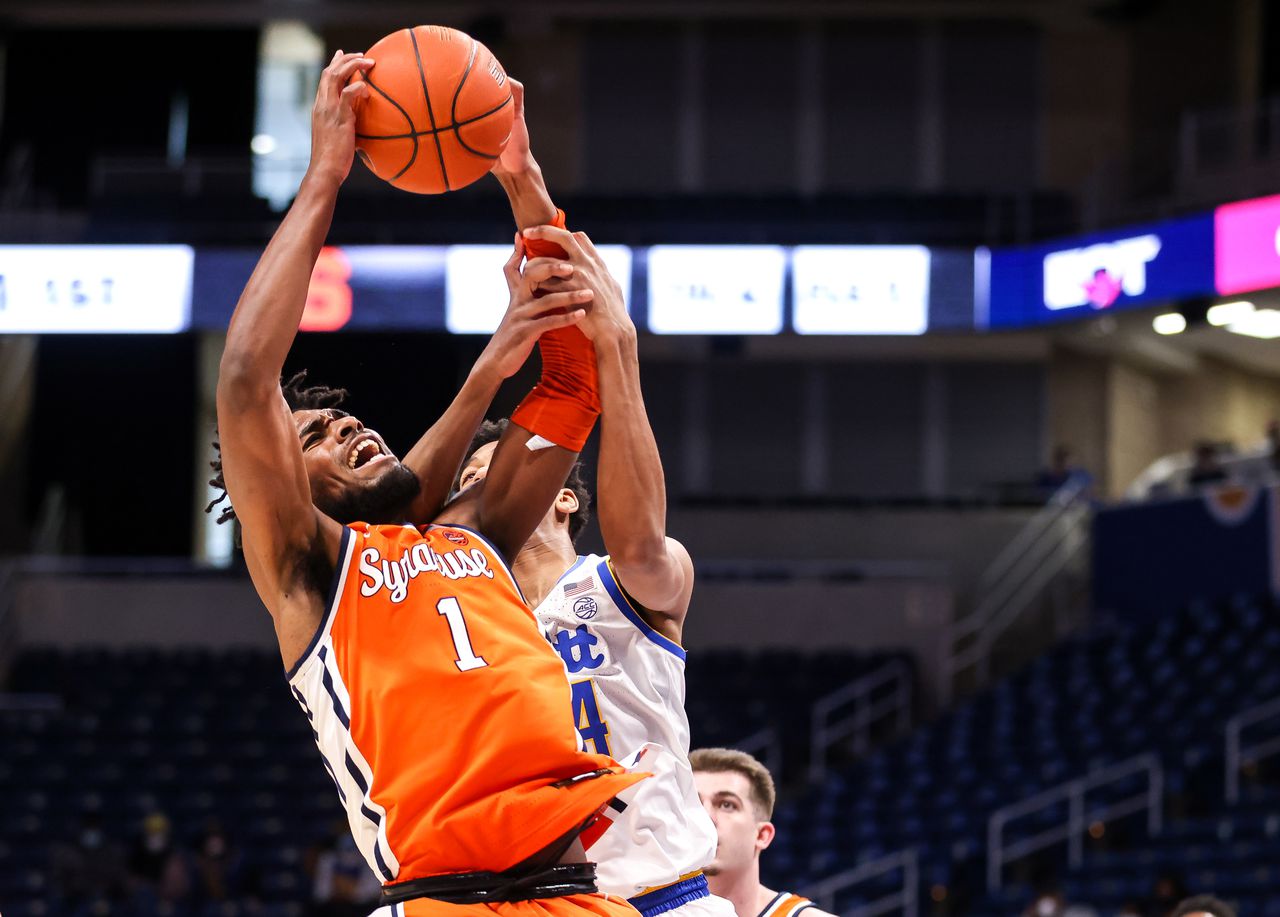 Syracuse, N.Y. — Quincy Guerrier is having quite a sophomore season.

The Syracuse forward (6-foot-7, 220 pounds) leads the Orange in offensive rating (kenpom.com) and is ranked 29th nationally in that category. He has the best effective field goal percentage on the team and is among SU’s best scorers in the 2-point region of the floor. And nobody rebounds like Guerrier, who leads the team among regular players in offensive rebounding and defensive rebounding percentage.

Guerrier averages 16.3 points and 9.5 rebounds per game. Both are team-bests. Guerrier ranks eighth in the ACC in scoring and second in the league in rebounding.

The Montreal native spoke with reporters Thursday via Zoom. Here’s the crux of what he said (questions and some answers have been edited for brevity and clarity):

On how much the disruptions to the season have hurt him developmentally: “I think it’s really everyone. Sometimes you’re in a rhythm and you’re not playing a game or you’re getting shut down. We need to stay ready. When I can, when I have a chance I’m running by myself or on the Peleton or doing stuff like that to stay in shape and be ready to play. But this year, it’s been hard for everyone, not just me.”

On the strides he thinks his team has made defensively and where it still needs to improve: “Our movement. We gotta be more vocal, too. Communicate. And moving our feet faster, too. But it’s really the communication and just to be active. I think that’s really going to help us: To be active and really communicate.”

On the summer-time tweaks he’s made to his shooting stroke and how he’s seeing those adjustments pay off: “It’s something I’m working on every day with Coach Red (Adrian Autry). After every practice, I’m shooting free throws, too. And I think that’s the reason my shooting has improved this year. I took a lot of time on my shooting. I corrected some stuff with my elbow and my fingertips when I’m shooting and that’s pretty much it. I’m working every day on my shot.”

On more detail about how he’s worked on improving his jump shot: “We’ve been working a lot on my 3-point (shot) but we’ve been working a lot too on my shot off the dribble, to create my own shot. I haven’t really showed it in games lately but that’s something that we worked a lot on. I think it’s really helped me for my touch. Sometimes we’re just working on my floaters and stuff like that. It’s helping me have a better feel for the ball when I’m shooting the ball. I think that’s the main thing we’ve been working on.”

On the emotions of preparing for Louisville and having the game postponed the day it was supposed to be played: “Yeah, it was kind of disappointing. But I think everyone was still in a good mood. We had a day of practice and everyone yesterday showed out in practice and had energy. It was really amazing. Our defense was great in practice. Everyone was communicating. We were having fun. That’s what we need, the type of environment that we need to get into for the next games and going into the rest of the season.”

On how important the mental aspect of the game is this season: “My approach for every game is the same. Come to every game with a killer mentality. Dominate and be physical and try to help my team win. That’s my mentality every practice or game.”

On why he has made such a significant jump from his freshman to sophomore years: “I think probably just my work ethic. It’s not even just working out. I was watching a lot of videos to improve my IQ and stuff like that. But I’m working hard every day. I give credit to my coaches and my teammates too.”

On whether he sees himself as a future pro and whether he is a position-less player at the next level: “I’m not really thinking about that right now. I’m just really working on my game. And we’ll see how it’s going to go. But for right now, it’s really watching a lot of videos to improve myself. Sometimes I’m watching the games when we’re done playing to see what could I do better, what did I do good. That’s what I’m doing right now.”

On his improvement at the free-throw line (.761 this year, .606 last year) and his team’s overall excellence at the line: “For myself, I’ve been shooting a lot of free throws after practice. Sometimes I’m shooting 100 free throws, 150 or just 50. So I know that definitely helps me. And my shooting mechanics, I changed some stuff too. I know that’s why I improved. For the rest of the team, Buddy, Joe, Marek has always been a good shooter. I think that’s why our shooting percentage at the free-throw line is really good.”

On what he knows about Clemson, SU’s opponent on Saturday: “I watched the game against UNC. I watched the whole game. They’re very physical. They play well on defense. They play with a lot of energy. They’re similar to NC State, I feel like. So we need to be ready, especially me and Marek to help with the guards. They’re going to overplay the guards so we need to help get the guards some shots or attack the rim and be aggressive.”

On the challenges of Clemson’s Aamir Sims: “I know he’s a great player. I watched the game against UNC. He’s really smart. He’s kind of a little like Marek, but bigger and stronger, so we will need to adjust to make sure that he’s not scoring a lot against us. He can pass the ball, so I know the center of their offense will probably be based more on him. So we need to be ready for him and for the rest of the team obviously. But he’s going to be the guy to watch.”

Syracuse needs to make up 4 ACC men’s basketball games. Chances of that happening? Not good

Bracketology breakdown: Where does Syracuse men’s basketball sit as we enter February?

No fans, no problems: ACC home men’s basketball teams are winning a lot of games