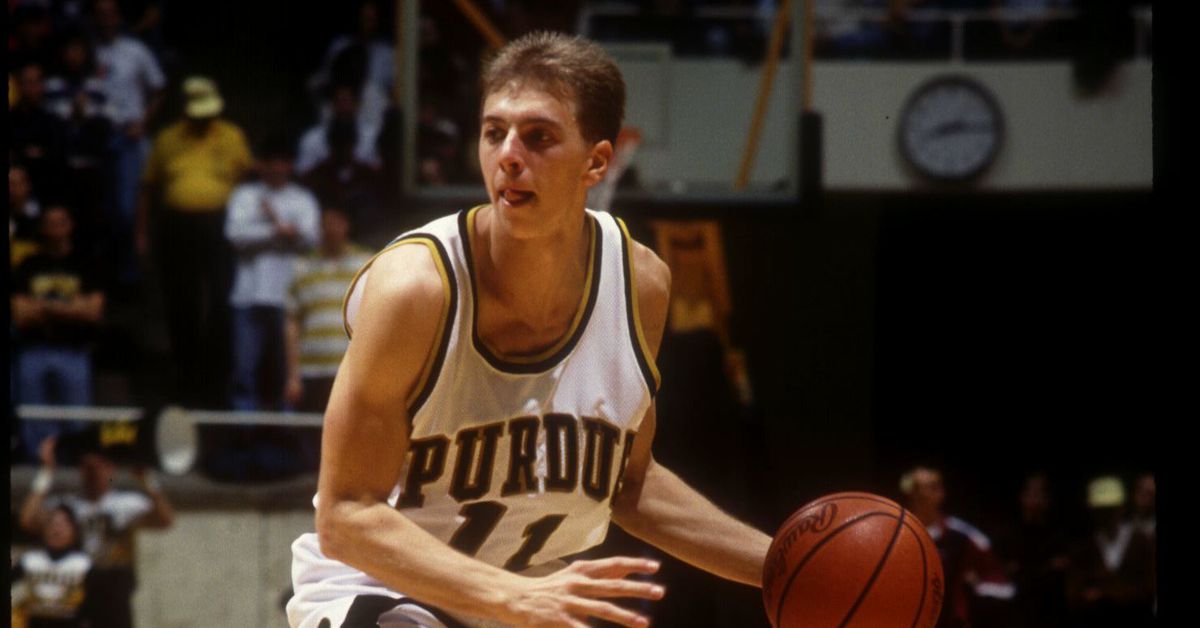 Now Purdue needs to pick up a walk-on from Barr-Reeve, that way it can have a player from all four of Indiana’s state champions for 2021 (Sidebar, a Final Four of Barr-Reeve, Ft. Wayne Blackhawk, Silver Creek, and Carmel would have been really, really good). Coach Matt Painter offered Carmel star Brian Waddell a few weeks ago and today gained his commitment for 2021:

Waddell is the son of former Purdue guard Matt Waddell (pictured above, so thanks Getty images). His dad is still sixth on Purdue’s all-time assists list with 460 from 1992-95. He is also 8th on the all-time free throw percentage list at 82.6%, 12th in three-point percentage at 40.2%, and 8th in assist-to-turnover ratio at 2.02. He also won a pair of Big Ten titles, scored 1,170 points (36th in school history), was the starting PG on a near Final Four team with Big Dog, and was a younger teammate of some guy named Matt Painter.

I am also so old that I remember watching the elder Waddell play in high school for a really good Tipton team that made the semi-state in 1989 before losing to state runner-up Kokomo.

Brian has had quite the career at Carmel, one of the state’s recent basketball powers:

Matt Waddell is the first to admit his son, Brian, is more athletic.

“I can’t argue in that in any way,” Matt said. “He gets off the ground a lot better than I ever did.”

Matt was no slouch. The Indiana Basketball Hall of Famer helped lead Purdue University to Big Ten championships in 1994 and ’95.

Brian, a Carmel High School senior, does have another edge. At 6-foot-7-inch, he is three inches taller than he his dad was.

“I think Brian is just now starting to realize his potential,” Carmel coach Ryan Osborn said. “He’s building confidence within himself, and he can get us going. He plays with great energy. He’s been really consistent for us. He plays within himself. You look at his shooting percentage, and he takes shots he knows he can make.”

Like Carleb Furst and Trey-Kaufman-Renn, he played on a 2019 state championship team. he was a sophomore reserve that did not play in Carmel’s 60-55 championship game win over Ben Davis, but he saw action with the varsity during the regular season. He played a larger role last year, and this year he averaged 15.6 points and 6.1 rebounds for a Carmel team that went 26-2 and won the Class 4A state title. He was instrumental in the 51-46 overtime win over Lawrence North, scoring 20 points and grabbing 10 rebounds while going 8 for 8 at the line. The run through Homestead-Lafayette Jeff-Gary West-Lawrence North, the last three coming by 9 total points in two total overtimes, was quite impressive.

Waddell is listed as a 6’7” and coach Painter has already stated that he will redshirt in year one at Purdue. That’s not a bad thing. Purdue is getting a very smart, savvy player. Carmel is a program that always plays extremely well as a team. Their system always exceeds the sum of its parts and reminds me of my old Basil Mawbey coached Kokomo teams in that they don’t rely on 1-2 superior individual talents, but play well as five cogs working in sync. They do not make mistakes. They are fundamentally sound. They always look to make the extra pass. They play stout defense. They hit free throws. There is a reason that they went 91-18 the last four years with two state titles and a runner-up appearance in 2018.

Waddell is a prime example of that. He patiently waited his time until being a major contributor that last two years in what is effectively an interchangeable system at this point. One would call him a late bloomer, but he was named an Indiana All-Star this year and was definitely one of the state’s best players this season. Purdue is getting a guy that will be an excellent role player and one that is a threat from outside. He’s not quite the same as fellow Carmel alum Ryan Cline, but there are similarities there. He is the definition of a “Purdue guy”.

Speaking of Purdue guys, Brian won’t be the only legacy from a mid-90s star on the roster, as sophomore walk-on Chase Martin’s dad Cuonzo Martin was a teammate of Matt Waddell. Too bad Glenn Robinson doesn’t have another son to pair with them.

Below is the updated scholarship grid, with earmarks from the “Free COVID” year everyone gets from this past season. Eric Hunter Jr. and Sasha Stefanovic have already said they don’t plan on returning in 2022-23 for their free year and with Trevion Williams already exploring his NBA options he seems unlikely, but it is there if they change their minds. There is also the possibility of an early NBA departure for Jaden Ivey after he leads us to the 2022 NCAA Cham——- (is dragged off kicking and screaming by the jinx police).

Purdue still has one open scholarship for 2021-22, and coach Painter usually reserves it for the most tenured walk-on (in this case, senior Jared Wulbrun) if it is open. Purdue is still very active in 2022 recruiting with Fletcher Loyer, and though the grid is at zero for that class as of now, we’re essentially working with three spots given he situation with Tre, Sasha, and Hunter.

Novak Djokovic: Most tennis players experiencing mental and motivational issues due to restrictions