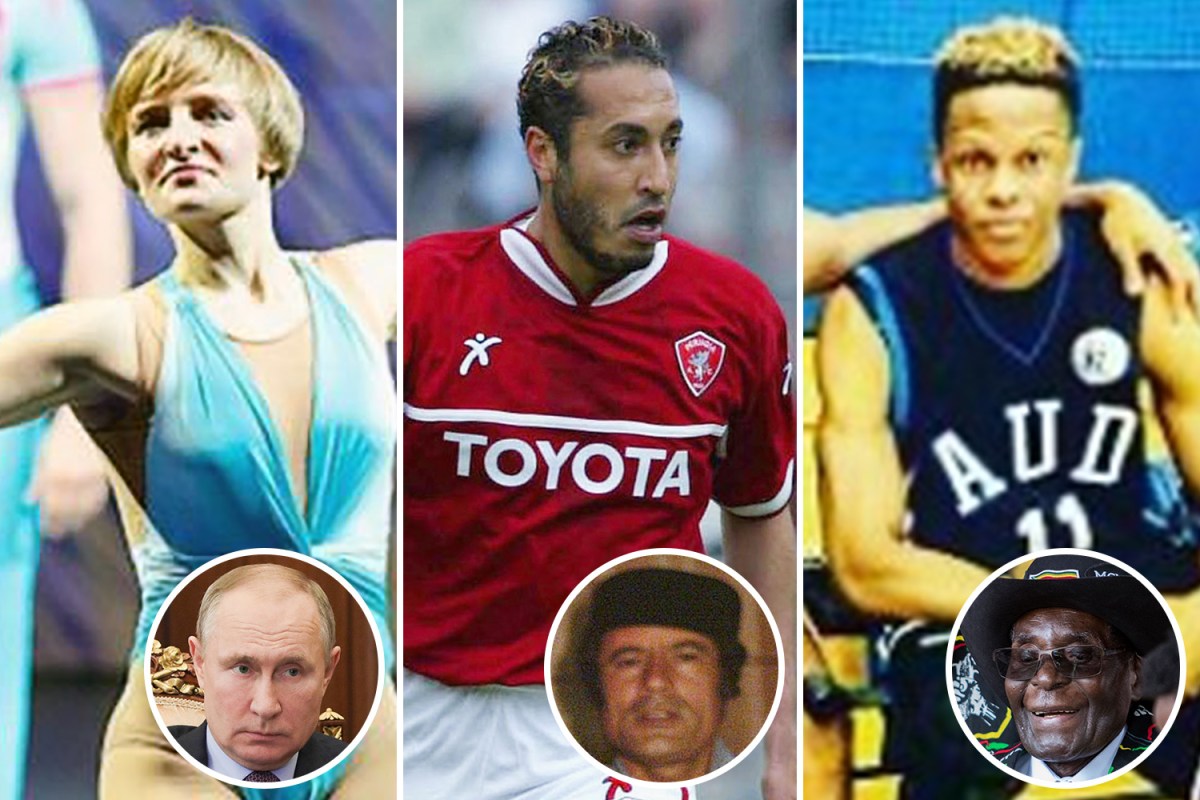 IF political power isn’t your thing, then a life in sport could well be.

Being an offspring of a politician doesn’t necessarily mean you have to follow in their footsteps.

These kids broke free from their more famous fathers’ rules to become a acrobatic rock ‘n’ roll dancer and a Serie A footballer.

While others reigned football federations in terror, just like daddy did.

Katerina, who was identified as Vladimir Putin’s daughter in 2015, is a skilled acrobatic rock’n’roll dancer and has competed in several competitions.

At a 2013 World Championship event in Switzerland, she came in fifth place with partner Ivan Klimov.

The 34-year-old is vice-president of the World Rock’n’Roll Confederation, and also a senior official in the sport’s national federation, chairing its international committee and committee for Russian regional development.

Son of the former Prime Minister of Zimbabwe, Robert Jr had aspirations of playing in the NBA – until US sanctions meant he couldn’t play in America.

Instead, he has had to ply his trade in his homeland – and in 2019 he was controversially selected to play for the national team.

It was suggested the 28-year-old was picked because of his name, rather than any serious talent.

The third son of former Libyan leader Muammar Gaddafi, Al-Saadi, now 47, was a talented footballer. At least we were made to believe so.

After starring in Libya in games that were pre-arranged to make him appear better, he ended up being signed by Italian Serie A team Perugia in 2003, employing Diego Maradona as a consultant and Canadian sprinter Ben Johnson as his personal trainer.

He made one appearance from the bench, before failing a drugs test.

In 2005, he joined Udinese and played just 10 minutes of a match. He was later at Sampdoria, where he never made his debut.

“Even at twice his current speed he would still be twice as slow as slow itself,” Italian newspaper la Repubblica revealed of Gaddafi’s sporting ability.

The 18-year-old is, apparently, a decent footballer and impressed for Lazio’s U23 side in recent weeks at right back, so much so he was signed by the club.

“Here at Lazio I’m judged only for the way I play and not because my surname is Mussolini,” he told Roman daily Il Messaggero.

Must’ve helped though, given Lazio’s famous ultras ‘Irriducibile’ are well-known for their fascist banners worshipping Mussolini?

Fidel Castro had a deep love for baseball – and during the old regime in Cuba he would often throw the first pitch to kick off their season, while he also reportedly tried out for the NY Yankees.

His son Antonio went into medicine, after having aspirations too of starring in the sport.

He ended up becoming the Cuban baseball national team’s doctor instead.

Romanian dictator Nicolae Ceausescu’s son Valentin was almost as tyrannical as his father.

Valentin, now 72, enjoyed a spell as Steaua Bucharest director in the 1980s and ran the rule over the Romanian football league.

Famously, he would snatch players from rivals without paying transfer fees.

The biggest case was the signing of Romania’s most famous star, Gheorghe Hagi who joined from lowly Sportul ahead of the European Super Cup final.

In what was meant to be a loan for just one game became a permanent signing because Valentin didn’t want to give Hagi back.

Those Iraqi footballers must’ve been quaking in their boots every time they played.

When he was head of the Iraqi Olympic Committee and Iraq Football Association, he ruled with an iron fist.

Maguire fined by Man Utd pal Matic for phone use, despite being on panel

There were reports that he used to call up the dressing room at half-time if the Iraq national team was under-performing and threaten to cut off players’ legs and throw them to ravenous dogs.

He was also said to have kept a private torture scorecard with written instructions how many times each player should be beaten on the soles of their feet depending on how they played.

The upside of upside tight ends