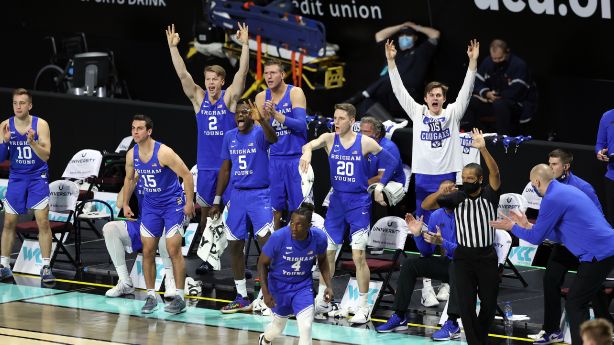 SALT LAKE CITY — All the tremendous amount of enthusiasm and positive energy Mark Pope has pumped into the BYU basketball program will ring a little hollow if success in the NCAA Tournament doesn’t follow.

Few understand this concept better than BYU’s second-year head coach, who won a national championship as a player on a Kentucky team that will go down in lore as a significant part of that program’s storied history. Nobody is expecting BYU to bring home the title, but a one-and-done won’t cut it, either.

“At this point, your season gets defined by how far you go from here,” said senior center Matt Harms, who played in the Sweet 16 and Elite Eight in two seasons at Purdue before transferring to BYU.

Pope preferred to take a longer view, saying “you’re going to be defined by everything.” He listed the criteria, citing recruiting along with results in the nonconference and conference portions of each schedule.

But glossy records only get remembered if they are accompanied by deep runs in March Madness. For BYU, big numbers pale in comparison to the program’s Elite Eight appearance in 1981 and Sweet 16 appearance in 2011.

“They all kind of go together,” Pope said of the defining elements. “I think this is the most momentarily recognizable part of any program’s production, is right here in the tournament. This is One Shining Moment, right?”

Yes, it is, said Pope, referring to the sappy song that is played each season on CBS after a national champion is crowned. Few shining moments at BYU can match a Sweet 16 run.

“The whole world is paying attention in that moment that people can remember for forever — not just BYU Cougar fans, but the world. Certainly, all of our guys are so excited to have a chance to take a big swing at this and to leave their mark on this hallowed NCAA Tournament experience. Yeah, I think it’s a huge deal. We’re always going to be evaluated by everything, but this is certainly a huge slice of that.”

It is even more so now that BYU is part of the West Coast Conference, which is not considered a powerhouse. Outside of beating Gonzaga and Saint Mary’s sometimes, the Cougars don’t get much national respect for repeatedly drilling all the low mid-major teams that comprise the WCC.

In his short time at BYU, Pope already has rejuvenated a program that hasn’t made the NCAA Tournament since 2015. Before COVID-19 shut down all sports last March, BYU likely would have made last season’s tournament, essentially meaning Pope is 2-for-2 with the obvious goal.

The No. 6 seed this year is also the program’s highest since Jimmer Fredette led the Cougars to the Sweet 16 as a No. 3 seed 10 years ago. Clearly, Pope has put the program in its best spot since Dave Rose got three tournament wins in 2010-11.

Besides further establishing BYU as a perennial NCAA Tournament team, this is also a chance for Pope to break out on the national scene as a coach. He already has impressive credentials on a smaller scale, building Utah Valley University over four seasons and surpassing Saint Mary’s as the second-best program in the WCC behind Gonzaga.

Not that it will be easy to win any more games this season. BYU awaits the winner of UCLA or Michigan State, two programs that own multiple national championships but are having relative down seasons.

UCLA enters the tournament on a four-game losing streak and is 4-6 over its last 10 games. Michigan was 9-11 in the Big Ten but has recently beaten Illinois, Ohio State and Michigan, all of whom are ranked in the top five.

BYU football: How QB Sol-Jay Maiava-Peters got on the Cougars’ radar