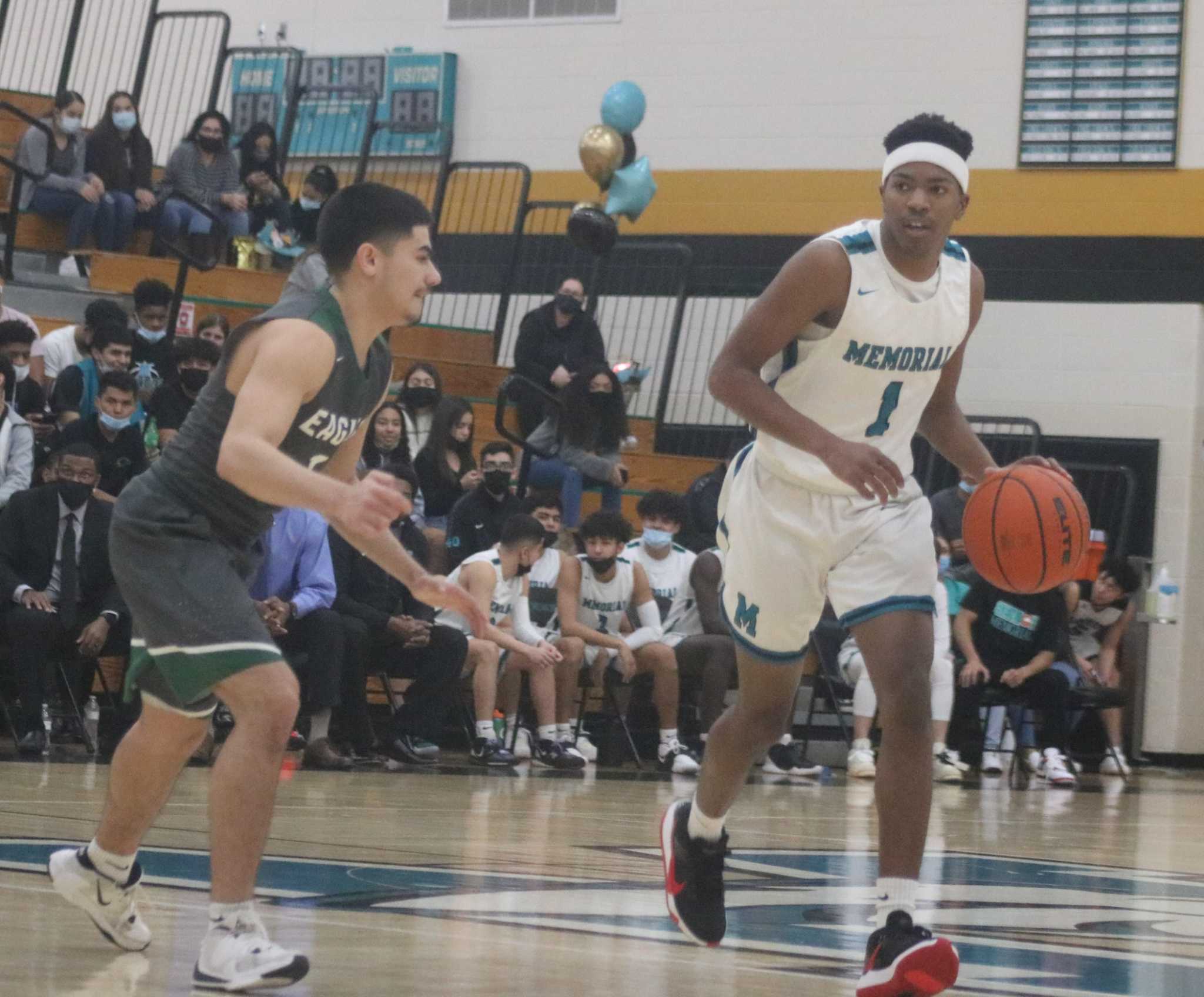 The unbelievable, the stunning, the exhilaration now sits just 32 minutes away.

Pasadena High School’s varsity boys basketball program, never thought of as a potential district champion for nearly the last three decades, can clearly see the prize right in front of them.

The once-beaten Eagles outscored Memorial 9-3 from the fourth period free-throw line, enabling Pasadena to defeat the Mavs 50-46 in a spine-tingling District 22-6A contest in the Mavs Gym Saturday afternoon.

With the game dripping with Class 6A state playoff repercussions, upstart Pasadena reduced its magic number to capturing its first outright district championship since the 1992-93 season to one. With red-hot Dobie bulldozing over Sam Rayburn 73-25 also Saturday, the Longhorns, winners of eight straight, prevented Pasadena from possibly clinching.

Come Wednesday night on its home floor, Pasadena can stop scoreboard watching and finish the project many thought would never ever happen again to an Eagles team in the three major sports of football, basketball and baseball.

Pasadena’s opponents keep waiting for its Cinderella-like magical carriage to turn into a pumpkin, but the Eagles keep landing on their feet. The four-point win is head coach Jon Pillow’s fourth district district victory of four points or less and their second in the first six days of February.

Leading the bonanza of scores from the foul line was Kanye Ortiz, who netted six points, allowing the junior to finish with 12. Memorial, after only committing six personal fouls in the first half, put their rivals in the double bonus at the free-throw line in the second half with 10. Not helping Memorial’s cause was Luke Giron fouling out.

Perhaps the unsung hero for Pasadena this day was Benito Tello. The Eagles didn’t look all that sharp in the first half and the Mavs had a lot to do with that, but Tello kept the team afloat by scoring a first-half high of 10 points, before being held scoreless the rest of the way.

Just how big were Tello’s contributions? Memorial owned 16-11 and 18-13 advantages well into the second period when Pasadena went on a 10-2 surge. Scoring seven of those 10 points was Tello. He knocked down a 3-point goal, creating a one-possession game, coming back three possessions later with his final score, putting Pasadena in front 21-18.

The second half then became a tit-for-tat battle to see which team had the higher number of mistakes and better shooting percentage. Pasadena drained nine field goals and Juarez had four of them, three arriving in the third period when the two teams each scored 12 points.

Chris Shelvin led Memorial, scoring a team-high 13 points, while Eric Rodriguez finished with eight and Darius Tarpley had nine. Rodriguez, may not have scored much, but defensively he put a crimp in Pasadena’s inside game much of the contest.

The Mavs, not the Eagles, stopped themselves at inopportune times. When the team had those leads of 16-11 andf 18-13, the Mavs were 0-for-4 from the foul line, attempts that could have upped the lead to seven points.

Memorial, which saw its Senior Night celebration spoiled, also likely hurt its chances with attempts at quick hitters that failed.

With the lead at 18-13, Rodriguez grabbed an errant Ortiz shot and the team tried to rush the ball down the floor with a deep pass. But the pass was too high and Pasadena came right back down the floor where the Eagles nailed a 3-point goal from Tello.

So, the Mavs went looking for a seven-point lead in a heartbeat and instead it became a two-point ballgame in the space of 15 seconds.

Now at 4-7, Memorial must win Wednesday at Deer Park (4-7) to end district. The entire Deer Park coaching staff watched Saturday’s game in the Mavs Gym. You know it’s a game of King Kong proportions when an entire coaching staff shows up to scout a game.

There’s likely going to be some kind of tie when the dust settles. It could be a two-way or three-way tie, possibly resulting in some kind of mini tournament.

‘I actually thought that I would be more busy with…’