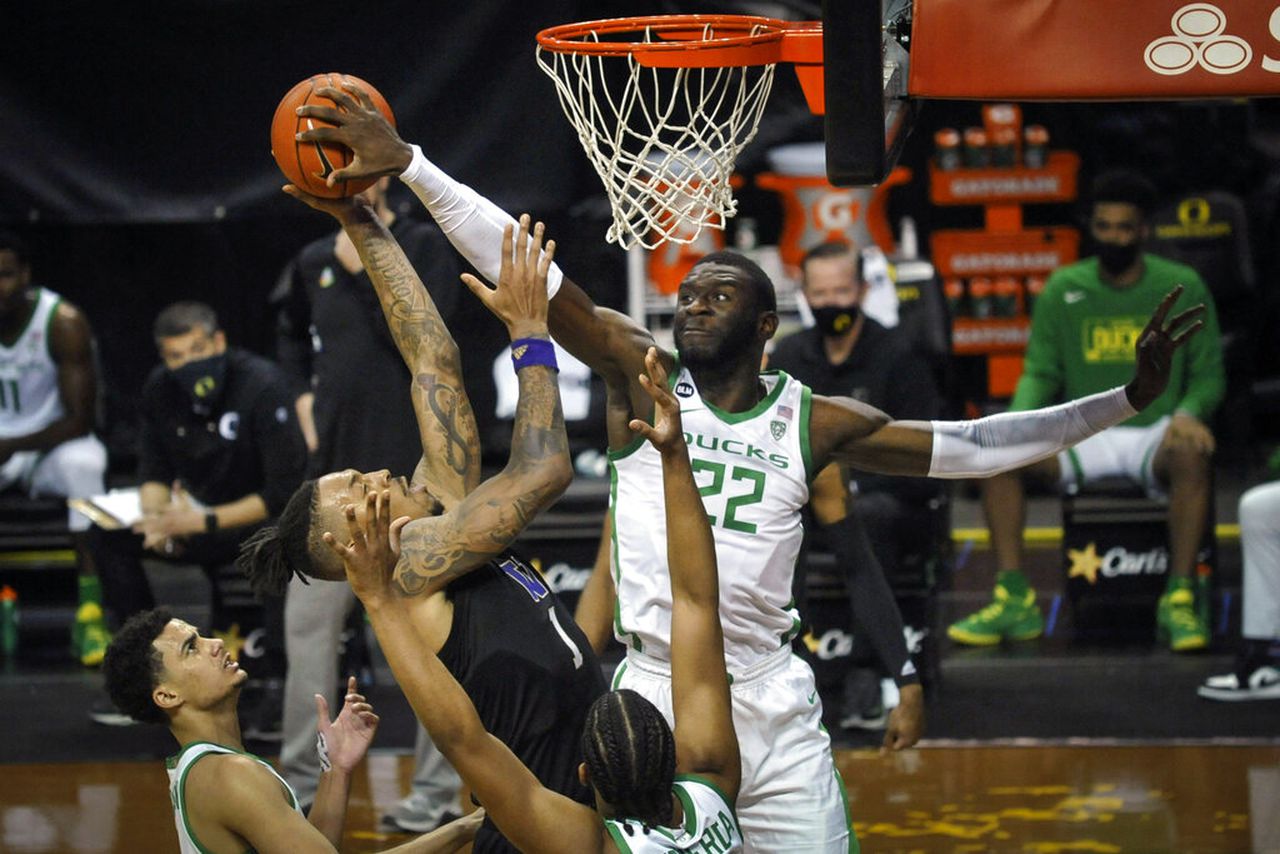 EUGENE — A matchup with the worst defensive team in the conference is what Oregon, particularly while shorthanded, needed to put forth its best three-point shooting performance of the season.

Eugene Omoruyi (25 points), Will Richardson (19) and Jalen Terry (15) combined for 11 of Oregon’s 12 three-pointers in a 86-74 rout of Washington at Matthew Knight Arena Saturday afternoon.

“We really wanted to get the ball in the middle and try to get as many inside-out threes as we could,” Oregon coach Dana Altman said. “I think that’s one of the reason that our percentage was high; we got a lot of the threes that we’d been working on yesterday in shootaround; ‘inside-out, inside-out and get your feet set and be ready to shoot it.’ I thought we did a decent job there. I thought we had some good finishes around the basket.”

Altman was especially pleased with UO’s aggressiveness as a team and the play of Oregon’s freshmen Terry and Franck Kepnang.

It was a season-high in scoring for Terry, who was 5 of 7 from the field, all from three. The freshman made four straight midway through the second half to blow the game open to a 20-point lead multiple times.

“Jalen was just a difference-maker there,” Altman said. “He’d been shooting OK but to get five threes down, that’s what took it from a 10-pijtn game to a 20-point game. I think we’d have been struggling right at 10 the whole game if it wouldn’t have been for Jalen getting hot and hitting those five threes.”

Both teams shot well throughout the game, though Oregon was stronger in the first thanks to the paint presence of Omoruyi, Chandler Lawson and Kepnang, who scored all eight of his points before the break. Kepnang and Omoruyi were each stout on the defensive end as well, with two blocks and drawing three offensive fouls in the lane, respectively.

Green got Washington got within 11 with 4:13 to play but Oregon responded and widened the gap back to 19 before the Huskies chipped away again.

In his second game back from let thumb surgery, Richardson had five of UO’s 18 assists on 29 field goals. The junior point guard said the two months not playing were difficult initially but felt it helped him in the long run.

Altman said Williams should return to practice early next week and there is an “outside shot” Duarte, who was in a walking boot on Saturday, would be back as soon as next weekend.

“I think that win was more important than what half of our team realizes because it gets our momentum going and builds a little confidence back in the team,” Richardson said. “We won without two of our starters and big (N’Faly Dante) out for the season. It gives our team the confidence that we’ve been lacking and brings it together. … We really haven’t been together that much this year. The team is starting to buy-in on the defense end and I think we’re going to take steps in the right direction.”

Nick Kyrgios: Six years after his grandmother passed away, tennis star has found another reason to love tennis