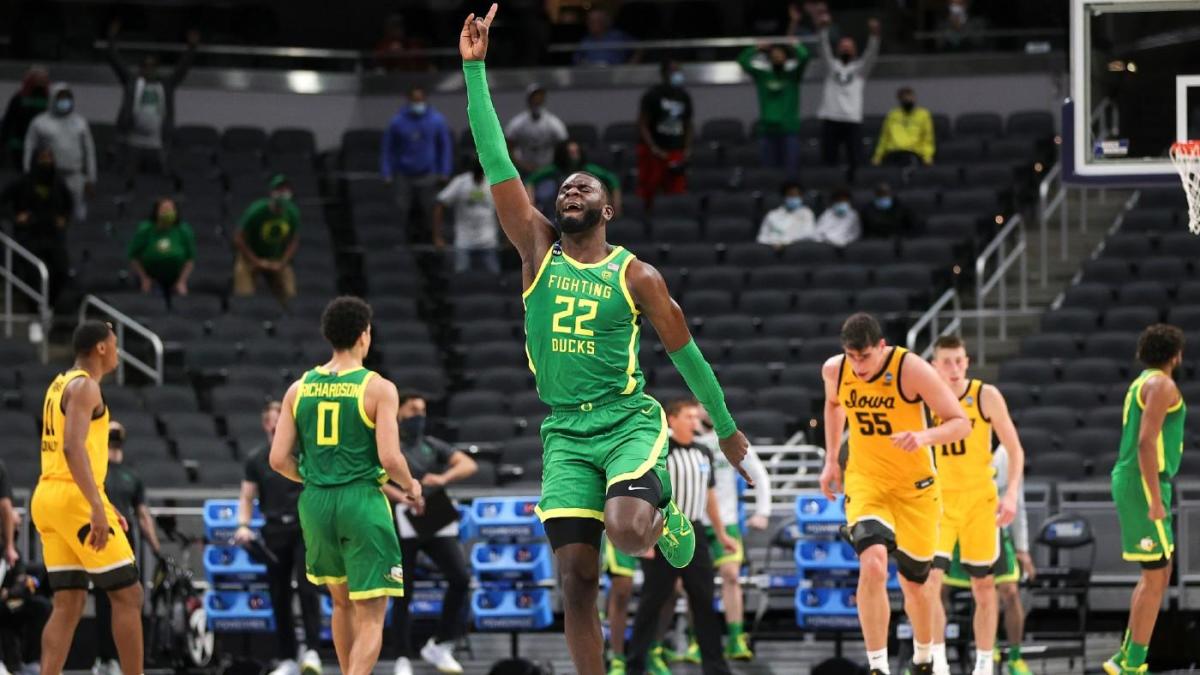 The Pac-12 has been maligned as a basketball league in recent years, and the conference was robbed of the opportunity to show its improvement on a national stage in 2020, when the NCAA Tournament was canceled due to the COVID-19 pandemic. But Monday produced a rather stunning reality: there will be four Pac-12 teams in the Sweet 16 and just one team from the Big Ten.

That was solidified during the conclusion to second round action, as No. 7 seed Oregon knocked off No. 2 seed Iowa. Then, No. 11 seed UCLA defeated Abilene Christian to become the Pac-12’s third squad bound for this weekend’s regional semifinals. USC pushed the total to four by knocking off Kansas 85-51, the third worst in KU history, in the final game of the second round.

Biggest opening-weekend takeaways and setting the Sweet 16 table: Listen to the latest episode of Eye on College Basketball now.

The Big Ten landed nine teams in the field of 68 and the Pac-12 landed only five. Four of the Big Ten’s nine tournament teams were either No. 1 or No. 2 seeds, while the Pac-12’s highest-seed was Colorado, which landed as a No. 5 seed. Ironically, the Buffaloes were the lone Pac-12 team to lose in the second round as they dropped a 71-53 decision to Florida State on Monday.

Another surprising element to the Pac-12’s collective staying power in the Big Dance is that Arizona, one of the league’s most prominent basketball schools, went through a self-imposed postseason ban this season that left it ineligible for the NCAA Tournament. But even without the Wildcats, the Pac-12 has proven to be stronger than expected.

The Pac-12, with its 9-1 NCAA Tournament record, is a big winner so far in this NCAA Tournament, and the Big Ten is an obvious loser. Here are some of the other winners and losers from Tuesday’s action.

No. 1 seed Michigan kept the day from being a total loss for the Big Ten by handling business in an 86-78 victory against a plucky LSU squad. The victory ensured the league have one team in the Sweet 16. If there’s one that truly deserves it from the Big Ten, it’s probably this Wolverines squad. In just his second season helming the program, coach Juwan Howard has assembled a deep, versatile squad that has totally outperformed its preseason expectations. The loss of senior leader Isaiah Livers could have deflated this team. Instead, it is proving to be a resilient bunch that plays with confidence and discipline. A showdown with No. 4 seed Florida State is up next for this bunch.

Speaking of those Seminoles, how about what Leonard Hamilton has done over the past four seasons. This team is heading to its third straight Sweet 16, and last year’s squad had more than enough talent to do the same before the NCAA Tournament was canceled. It’s never glamorous and there’s rarely a can’t miss superstar on his rosters, but Hamilton has a way of extracting the most from his roster. Monday’s defensive performance in a 71-53 win against a Colorado team that shredded Georgetown on Saturday was masterful.

Are there still people out there decrying Alabama’s 3-point heavy style as a flukish operation that won’t hold up in a single-elimination tournament? By surviving primarily off their defense on the way to an SEC Tournament title and in a first round victory over Iona on Saturday, the No. 2 seed Crimson Tide proved there is more to their mojo than just outside shooting. And No. 10 seed Maryland learned the hard way just how lethal Alabama can be when it is, in fact, hitting outside shots. The Crimson Tide hit 16-of-33 attempts from deep against the Terrapins in a dominant 96-77 victory. Next up for the Crimson Tide is a game with No. 11 seed UCLA. The Bruins have struggled to defend the 3-point line all season.

Don’t forget that USC star freshman Evan Mobley is the younger brother of another amply capable big man who also plays for the Trojans. Big brother Isaac reminded Kansas of that on Monday as USC capped second-round action with a 85-51 over Kansas. The younger Mobley scored 14 of his 17 points in the first half as the Trojans opened up a 40-21 lead over the Jayhawks. Next up for USC is a Sweet 16 showdown with conference foe Oregon, who the Trojans defeated 72-58 on Feb. 22.Winner: Oregon doing it again

The Ducks have been to seven NCAA Tournaments under coach Dana Altman and have now won at least one game every time. After Monday’s impressive 95-80 win against Iowa, the Ducks are headed to their fifth Sweet 16 under Altman’s direction. This is a transfer-heavy group that is gelling offensively, and Monday’s offensive explosion was a real eye-opener as to what the ceiling may be for this team. Some will want an asterisk next to whatever Oregon accomplishes in the NCAA Tournament since it advanced out of the first round due VCU’s COVID-19 issues. But there was nothing illegitimate about the way it thrashed Iowa on Monday.

This was supposed to be the year for Iowa, but instead it ended with another dose of NCAA Tournament disappointment for a program that was — at the very least — planning to make its first Sweet 16 since 1999. The Hawkeyes spent 10 weeks this season ranked in the top-five of the AP Top 25, and the pain of an early exit will only be magnified by the fact that it feels like an era is ending. Star center Luka Garza was just as phenomenal as expected this season, but the program’s all-time leading scorer departs without a conference title or any significant postseason success on an otherwise legendary collegiate resume.

Despite getting into an eight-point deficit in the opening few minutes against a fiery Oklahoma team, No. 1 seed Gonzaga on Monday hit the turbo as only Gonzaga can do, advancing to the Sweet 16 with an 87-71 win. Behind a career-high 30 points from Drew Timme, the Bulldogs (28-0) managed to turn its eight-point hole into a dozen-point lead by half and they never relinquished it from there. It’s a strong win for the program, giving Gonzaga its sixth consecutive Sweet 16 appearance. But also one for this historically great team that has now won 27 of its 28 games by a double-digit margin.

Umm, Texas? Care to explain yourself? Abilene Christian was one of the best stories of the first round with its Texas-sized upset of the No. 3 seed Longhorns, and Monday brought a reminder of just how unlikely that outcome was. No. 11 seed UCLA roared past the Wildcats 67-47 and into the Sweet 16 without any noticeable trouble. The Bruins’ relatively easy win made the dud performance by Texas all the more confounding. How did the Big 12 Tournament champions led by a trio of veteran guards produce such a dismal performance against Abilene Christian?

Few teams have the ability to alternate between excellent and mediocre like Creighton. But a quality version of the No. 5 seed Bluejays showed up Monday in a 72-58 win over No. 13 seed Ohio. For a team that has dealt with a massive distraction over the past month surrounding the controversy of coach Greg McDermott’s admitting to the use of a racially insensitive analogy, making the Sweet 16 is an impressive accomplishment. It’s actually the first time Creighton has made it this far under McDermott, who is in his 11th season with the program. Up next is the brutal challenge of playing No. 1 overall seed Gonzaga in the Sweet 16. But depending on which version of this team shows up, it may be able to give the Zags a test.

Ohio forward Ben Vander Plas probably hasn’t been compared to former Duke star Zion Williamson very often in his career, but there was a striking similarity between the two Monday. Vander Plas played most of the second half of the Bobcats’ loss to Creighton with mismatched shoes after his right shoe exploded in Williamson like fashion. There was nothing particularly unorthodox about the way Vander Plas landed on his right foot, but the sneaker gave way, and the redshirt junior was forced to leave the game and find some new footwear.

Humboldt Park’s Roberto Clemente High School Brings Back Boys Swim Team After 25 Years Thanks To Alumna’s Effort
We use cookies on our website to give you the most relevant experience by remembering your preferences and repeat visits. By clicking “Accept”, you consent to the use of ALL the cookies.
Cookie settingsACCEPT
Manage consent