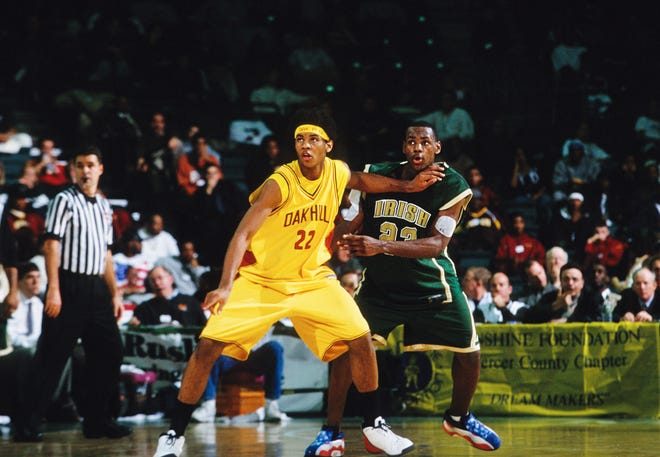 With the news that he is transferring to Oak Hill Academy, Buchtel’s Chris Livingston becomes the latest in a long line of basketball superstars to transfer to the powerhouse school located in Mouth of Wilson, Virginia.

Oak Hill,  the private, Baptist-affiliated Christian secondary school has sent more players to the NBA, a total of 33 players, than any other school in the nation.

There are three competitive basketball teams at the school, the Gold Team, the Red Team and the White team.

According to the school’s website, the Gold Team “is by invitation-only, as determined by the head coach. This 12-player group is comprised almost exclusively of Division I-level talent.” The Red team “is comprised of experienced players, mostly upperclassmen (11th and 12th grade). Underclassmen on the Red Team may occasionally have an opportunity to “move up” to the Gold Team the following year.” The White team “is for players not yet at the Red Team level. Seniors do not typically play on the White Team.”

Ten-time NBA All-Star who recently signed with the Los Angeles Lakers this offseason. Led Syracuse to a national championship his only year in college. Graduated from Oak Hill in 2002.

Finished out the 2020-21 season with the Cleveland Cavaliers. Graduated from Oak Hill in 2011.

The No. 8 in the 2001 NBA Draft by the Cavaliers after graduating from Oak Hill. Went on to have a 12-year pro career.

Fourteen-year NBA veteran and 2003 NBA Champion. Was an All-American in 1996 at Oak Hill.

Nine-year NBA veteran who skipped college to play professionally in Italy after graduating from Oak Hill in 2008.

Won a gold medal in this year’s Olympics as part of Team USA. A first-round draft pick from Kentucky, he graduated from Oak Hill in 2018.

Helped lead North Carolina to a national championship in 2009 before going on to a nine-year NBA career. A 2006 graduate of Oak Hill.

Twins who led Nevada to a surprising Sweet 16 run in 2018. Both played for the Charlotte Hornets last season. 2014 graduates of Oak Hill.

The No. 7 pick in the 2013 NBA Draft. Signed with the Portland Trail Blazers this offseason. A 2011 Oak Hill grad.

Former NBA Slam Dunk champion who played 13 seasons in the league. Drafted No. 17 overall by the Atlanta Hawks after graduating from Oak Hill in 2004.

First round NBA draft pick by the Trail Blazers out of Duke in 2011. Currently an assistant coach for the Blue Devils. A 2007 Oak Hill grad.

Two-time NBA All-Star who played 18 years in the league. Currently the head coach of the Vanderbilt Commodores. A 1993 Oak Hill grad..

Note: Michael Beasley and Kevin Durant both played at Oak Hill but later transferred out.