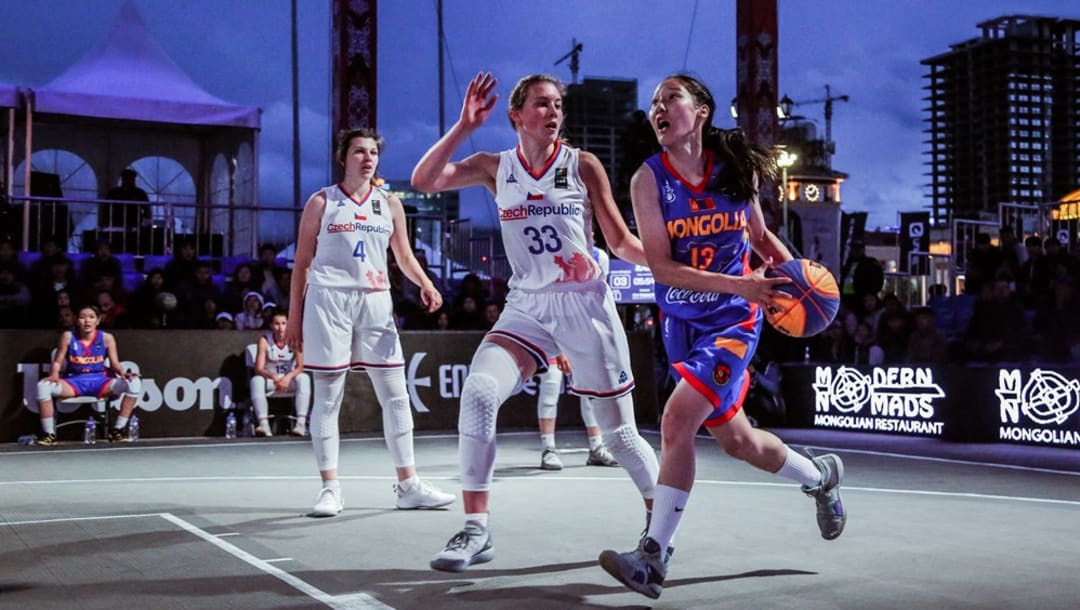 Mongolia women’s 3×3 basketball side are the first team to qualify for an Olympic Games from their nation. The whole country, plus the men’s side who just missed out on making it to Japan, are ready to roar them on.

The sport of 3×3 basketball has had a stratospheric rise, from street sport to the Olympic Games in just seven years, and Mongolia has been on board for the ride.

The event takes place on half a basketball court, with three on court playing at one time plus a substitute. Each team shoots into a single hoop, with the two points gained from outside the usual three-point line, and one point, inside. The winner is the team with the highest score at the end of the 10-minute period, or the first team to reach 21 points. If the score is tied after 10 minutes, the game goes into overtime with the first team to score two points declared the winner.

The sport is fast and furious and, in non-COVID-19 times, events often have an urban festival feel with DJs, music, dancers and raucous crowds, which is why it is so popular, particularly with the younger generation. In Mongolia it is so popular, a dedicated TV channel plays matches and everything stops when a match is on. Even more so now that the women have qualified a team to Tokyo 2020, in 2021.

The squad of Solongo Bayasgalan, Chimeddolgor Enkhtaivan, Tserenlkham Munkhsaikhan and Khulan Onolbaatar have made history by becoming the first Mongolians to qualify for a team event at an Olympic Games. Previously, only athletes from individual sports competed for Mongolia. A second history-making moment was when Onolbaatar was announced as the first woman flag bearer for her nation at the opening ceremony. She was presented with Mongolia’s flag by President Khurelsukh Ukhnaa before heading to Japan.

“Female Mongolian athletes have been performing really strong in international competitions,” said Onolbaatar, who went to school in Australia so speaks perfect English. “Becoming the first woman to carry the flag at the Olympics is such an honor. I am just so proud right now.”

On taking part in the first team event for Mongolia she told FIBA3x3.basketball, “I’m happy for sure but the biggest emotion is the pride to be Mongolian. I just can’t wrap my head around the idea that I am given this huge opportunity on the biggest stage in sports, at the Olympics. It is every athlete’s dream to represent your country on the biggest stage possible”.

Onolbaatar made her 3×3 debut in 2017, becoming a household name on the 3×3 scene after leading Mongolia to the quarter-finals of the FIBA 3×3 U23 World Cup 2019, including a memorable buzzer-beating win against Germany.

The women qualified for Tokyo 2020 via a FIBA 3×3 Olympic Qualifier in Japan in November 2019 and the men’s side came close, just missing out on joining their compatriots at the final Olympic qualifying tournament in Hungary in June. Tokyo 2020 spoke to the men’s captain, Delgernyam Davaasambuu, prior to that event about the popularity of the sport in Mongolia.

“This year is a very special year for our country because our country normally (don’t qualify in) team sports… it’s the first time in the 3×3,” he said. “Our women’s team can already go to the Olympics. We are first time qualifying Olympics, so we are very happy. Everybody is happy and excited.”

“In Mongolia, it is also exciting because both gender teams are doing well,” said Bat Gotov, the team delegate for 3×3 Mongolia national team, who helped translate some answers, and expand on others. “For example, in Serbia, it’s a good team but it’s only a men’s team. In Mongolia, people are equally as excited about the women’s team playing as the men’s team playing. We also have good representation in all age groups as well – in youth, under 18 and under 23, so it’s more inclusive for both genders for all ages, so this also makes this sport exciting for Mongolians.”

The fact that Mongolia have qualified a team at all is testament to their love of the sport. There are little more than three million people in the country, known for its vast, rugged expanses and nomadic culture. Twice the size of Turkey, and with just under half the population living in the capital city of Ulaanbaatar, it has been relatively easy to keep socially distanced during the Coronavirus pandemic, according to Davaasambuu.

“It’s the same for other countries but now it is fine because our country is big – big land and small population, so it’s easy, it’s fine,” said Davaasambuu who trains in the capital but loves to relax by heading back to the wide open spaces and seeing his parents who own more than 200 horses.

“In terms of Corona, of course, it’s impacted everyone, including all sports and of course the Olympics being postponed, and a lot of local and international events have been cancelled but as a country, Mongolia has done relatively well, I believe,” added Gotov.

“Thanks to efforts from government vaccination is progressing quite speedily – I believe as of today, over 85{b38518e90d6beec35f98d5e9b78a588994850b1818f8899bc92dfe97ae7b3460} of the adult population has already had at least one dose of vaccine, and one-third of the adult population is fully vaccinated. Also our Olympic team, including our 3×3 team have received their AstraZeneca vaccines back in April, so it also helps to travel and hopefully the borders will start opening soon for everyone.”

The team are often seen as underdgos, says Onolbaatar, which she feels works to their advantage. “All the other teams don’t really take us seriously. I think that part actually made us stronger and sharpened our focus,” she said to FIBA . “This summer we have practised a ton and practised relentlessly. I think that’s why we are showing some good results.” This training has been enabled as the women turned professional after their Olympic qualification.

Gotov agrees with Kulan that the underdog status can be a benefit.

“It’s quite exciting because 3×3 provides an opportunity for the team to travel,” he said, “and for the past three or four years being in different countries all over Europe, Asia and the Americas, a small community of Mongolians are always found somewhere and they always come and show up and express support. Obviously, they love to see a home team play in big events, and matching the grand names like Serbia and Russia and whatever, and small Mongolia is also on the court, so it’s quite exciting for them, for the country.”

The world’s number one urban sport, developed from street basketball until the International Basketball Federation (FIBA) formally adopted the rules ahead of 3×3 basketball’s debut at the 2010 Youth Olympic Games (YOG) in Singapore. It is the first sport to debut at YOG to be included in the Olympic programme, and since 2012 a World Cup for nations, and a World Series for clubs have been implemented. Mongolia are currently ranked eighth in the world for both genders.

Mongolia has competed in every Olympics since their first one at Tokyo 1964 – except Los Angeles 1984 – but have previously only qualified in individual events.

In that first Tokyo Games, 21 Mongolian athletes competed in five sports, going home without any medals. Since then, they have won medals at every Games except Sydney 2000, including two golds, 10 silver and 14 bronze in judo, boxing, shooting and wrestling.

Beijing 2008 was their zenith, when Naidan Tuvshinbayar and Enkhbatyn Badar-Uugan both won gold, in judo and boxing, respectively. Tuvshinbayar just nicked it into the history books as the first Mongolian to stand on top of an Olympic podium, just 10 days ahead of Badar-Uugan.

“It was an interesting moment in Mongolia,” continued Gotov, “because right before the Beijing Olympics we had some elections, a parliament election, in late June and also in July. There was some unrest and dispute and discussion so it was kind of bad blood in Mongolia at that time, and suddenly, one day, when the Olympics gold came the whole of Mongolia became united back again and everybody felt okay… So it’s sometimes interesting that politics divides, and sport unites.”

During Rio 2016, a rather different experience was had by Mongolia. “If you recall, it was some accident with a Mongolian freestyle (wrestler),” said Gotov, “and there were only three seconds left and he started to celebrate on the bronze medal and they gave him a penalty point and he lost. And, obviously, his coach has been upset and protesting and getting naked… so maybe this time it will be different!”