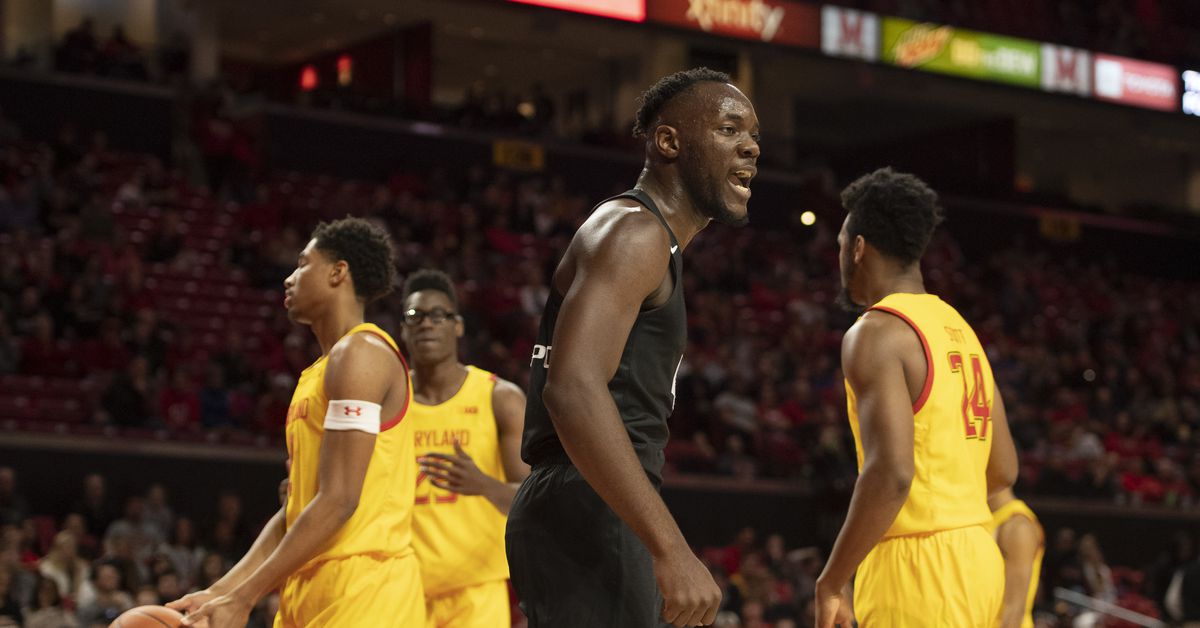 Since we didn’t use it for so long, why not break the Scholarship Graphic out again, just for fun.

The easy quick reminder is Missouri has two spots left. It’s not a certainty they fill both but I think they would like to.

If you peek quickly at the roster by depth chart it looks like Missouri might be missing some reliable depth in the middle.

No offense to Jordan Wilmore, but I’m not sure based upon what we saw this past year you can consider him reliable depth in the middle of the defense. Anytime you can find someone who is 7’3 and can move at all there’s intrigue… but Wilmore is still a project and for Missouri to be competitive next season relying up him and Yaya Keita — who is very gifted athletically but coming off an ACL injury — probably isn’t going to be a recipe for success.

So Missouri is looking for someone who can fill in quality minutes at the five spot. Anytime a post player shows up in the portal, I’m RT’ing the name into my own timeline more for my own records to keep track of than trying to alert any Mizzou fans following me. The issue with following Missouri recruiting is the stealthiness with which Cuonzo operates. But what we can figure out is they are looking at some post guys.

The top want in the ‘need’ area seems to be Christian Bishop. Bishop played at Lee’s Summit West High School and had a Mizzou offer out of high school. At the time he didn’t appear to be a big need for the Tigers and chose to attend Creighton where he became a fixture in the front court. He was a pretty low usage small ball center who embraced the role in a tough league and got better in his three seasons in Omaha.

Bishop is only 6’7 but his rebounding rates were steady and he improved dramatically on the defensive glass. He’s bouncier than you think, and shot nearly 70% on 2FGs this past season, and knowing his limits he’s attempted just 8 three pointers in three seasons.

Its clear to see why he’s a priority for the Tigers, but the problem is he also has an offer to Kansas, and the Jayhawks are putting the pressure on. By my count, the Chickenhawks are currently full on scholarships as long as Ochai Agbaji and Jalen Wilson come back to school. Both have announced for the draft but haven’t signed with an agent and neither are projected in the first two rounds by nearly all the pre-draft boards. So that’s a situation to monitor.

In the meantime, Missouri reached out to a guy I’m very intrigued by…

Obviously Dan Oladapo is doing it at a different level than Bishop, but his rebounding numbers are awesome, and he seems to understand who he is as well. He’s taken just FOUR three pointers in two years at Oakland. Like Bishop, he focuses on what he does well and stays around the rim, and he rebounds. His offensive rebound rate is one of the best in the country, and he’s a reliable defensive rebounder also. Against Robert Morris this last year he had 20 total rebounds. He’s 6’7, and in a lot of ways like the poor man’s version of Bishop. But they have a lot in common and… I kinda think Mizzou should take him if they can get him.

I can also mention here that Mizzou could also get involved with David Joplin, who was a recently released Texas signee, but he’s really more of a true wing/combo forward… and not a guy you want playing the five. He’s also far more likely to follow Shaka Smart since Joplin is originally a Milwaukee guy. So I’d say if anything he’d probably be more in the category below.

With Gordon, Coleman and Davis, Missouri got what they needed out of the transfer portal to hopefully supplement their issues at guard. But the want… the want…

Cuonzo Martin has wanted Tamar Bates as a Tiger for more than a few years. He was one of the earliest players targeted in the ‘21 recruiting class. Mizzou offered in October of 2019 and were on Bates before that. Martin wasn’t able to secure a commitment, as Shaka Smart and Texas swooped in later the next summer and wooed the Kansas City, Kansas product to Austin.

But a funny thing happened along the way; the seat under Shaka Smart got a little too hot and he prematurely bounced to the job at Marquette, and Bates asked out of his Letter of Intent.

Former Texas commit and a Top-50 senior Tamar Bates, tells @Stockrisers that the following programs are involved in his recruitment since his release:

Now fans and analysts have noted when Bates committed to Smart he mentioned one of the reasons was a desire to play for a Black head coach. While I don’t doubt there’s some incentive for Bates to stick to that part of the pledge, I don’t think it’s the deal breaker most seem to portray it to be.

Bates is a really smart and thoughtful kid. He’s keenly aware of the sort of potential he has in branding himself, and in part using the Texas brand was attractive. The remaining programs on the list don’t offer the same kind of program branding that Texas offers. Oregon and Indiana could probably come close. Marquette, and his formerly attached coach, Shaka Smart, offer the Jordan Brand… but only Oklahoma State, Indiana, Marquette, and Missouri have a Black Head Coach.

I don’t think Bates is going to move very quickly here. He was methodical the first time around, and I’d expect him to be so this time. And I don’t know the timelines for Oladapo or Bishop, either.

I’m not entirely convinced this is the remaining list, but if you could wrap up your spring with either Bishop or Oladapo and Bates, that’s a hugely successful spring. And considering the last few springs have been mostly lackluster save for the Kobe Brown addition, Missouri has largely missed on their top targets. Fixing your last hole and landing an elite “want” sure would be a nice way to wrap things up with some momentum heading into next year.

Oregon heads into its third week of spring football with a to-do list of items on tap
We use cookies on our website to give you the most relevant experience by remembering your preferences and repeat visits. By clicking “Accept”, you consent to the use of ALL the cookies.
Cookie settingsACCEPT
Manage consent