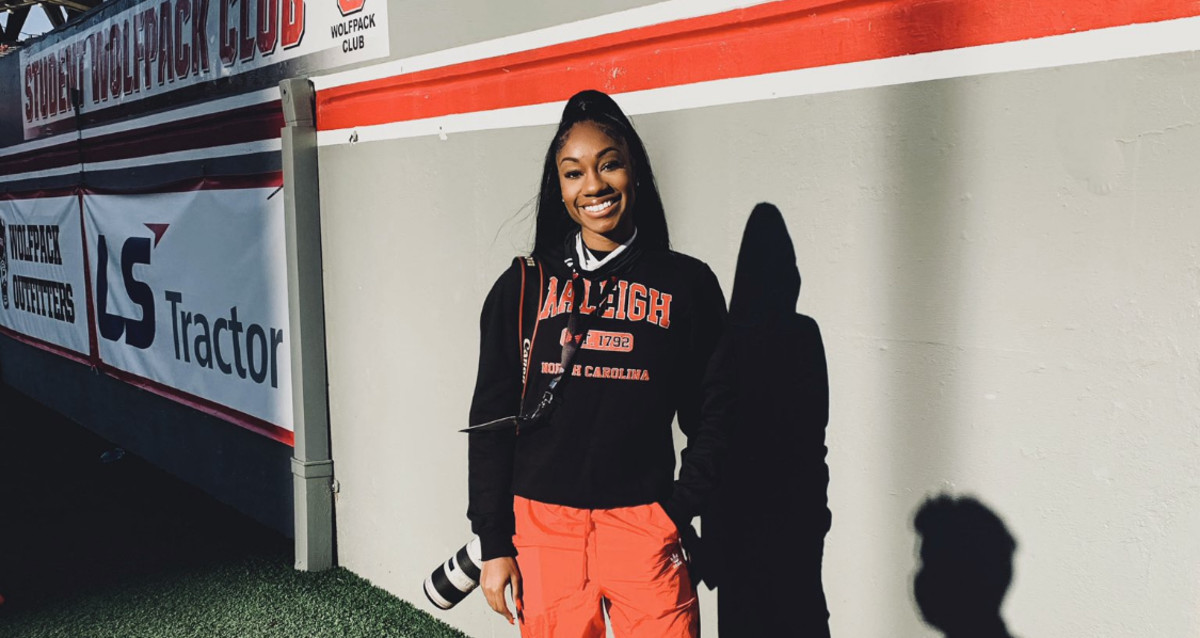 Earlier today, Chanelle Smith-Walker officially announced over social media she will be taking over as the Director of Content for Tennessee Football, replacing Clay Bollinger, who previously held the title. She will work hand-in-hand with the football team to employ different social media campaigns for student-athletes to build their brand and promote the Tennessee brand.

Smith-Walker will leave her role as Director of Creative Media at North Carolina State University to come to Knoxville and there is much more to know about the industry’s pioneer. As the first Black woman to ever hold the title in the industry, she discusses her experiences, unique perspective, and plans on Rocky Top.

“I bring a different perspective. First, I was a D1 collegiate athlete and my brother played football in college, so I truly understand what these players are going through. I’ll really be able to show how hard they work on and off the field,” Smith-Walker on what she brings to the role. “Secondly, I didn’t go to Tennessee, I have no ties to it. Some people may see that as a negative, but I think it’s a great thing because I’ll be able to tap into things we may be overlooking. Also, I’m a young Black female, so I’m able to connect with different audiences, especially players, recruits and their families. Having that one thing in common, I’ll be able to stay up-to-date on what’s current and trendy from a recruiting standpoint.”

“It’s an incredible opportunity; I don’t take it lightly at all. It shows that we’re taking a step in the right direction and making a conscious effort to diversify the staff,” Smith-Walker said on being the first woman to hold the Director title in the Southeastern Conference.

Holding the title will enable Smith-Walker to build a diversified staff around her. “Having a diverse workplace opens the door for different perspectives, cultures, skills, characteristics and experiences. It will also increase creativity. People with different backgrounds tend to have different experiences, which leads to different views, which ultimately leads to higher creativity,” she said on the importance of diversifying t team and its impact on creativity.

Smith-Walker’s role will empower her to give back to the Black community in more ways than one, an opportunity she cherishes immensely.

“In the Black community, I feel like we really push being an athlete. I want to show them that you don’t just have to be an athlete. You can do both. You can play football AND do something else that you’re really passionate about,” Smith-Walker stated. “This is huge for me because say an athlete isn’t having the season they wanted, or they have a season-ending injury, once that outlet (football) is taken away from them? What’s next? I think it’s important to have two forms of release aside from football. It could be anything fashion, music, art, photography, etc.”

2020 was a challenging year for the nation in general. Given that Smith-Walker is the only Black woman to hold the position she does and the social injustices that occurred across America, it was even more trying for her. She leaned on the players around her and her work to develop unity at North Carolina State.

“Honestly, working this year was extremely hard. With everything going on in America and then being the only Black woman on staff, I had to educate my white counterparts. We had a lot of uncomfortable conversations, but it was a must for them to really understand why Black people were so angry,” Smith-Walker said of the most difficult challenges she has faced in her work.

“This also gave me the opportunity to really let our players do the talking, using their words and ideas. It was their idea to come up with Pack United. They even helped me design the logo. It was their idea to take pictures holding up a name of someone that was killed by police brutality. I just turned their photos into a graphic. I think a lot of people are scared to let their players talk, but I’m not. This new generation is woke. They know what’s going on, and they have a lot to say.”

Tennessee players were active in standing up to social injustices over the Summer, and they continued their support throughout the season. Working alongside Smith-Walker, they will get to use their voices even more.

BMW 220i M Sport Price: BMW 2 Series petrol variant launched at Rs 40.90 lakh |
We use cookies on our website to give you the most relevant experience by remembering your preferences and repeat visits. By clicking “Accept”, you consent to the use of ALL the cookies.
Cookie settingsACCEPT
Manage consent