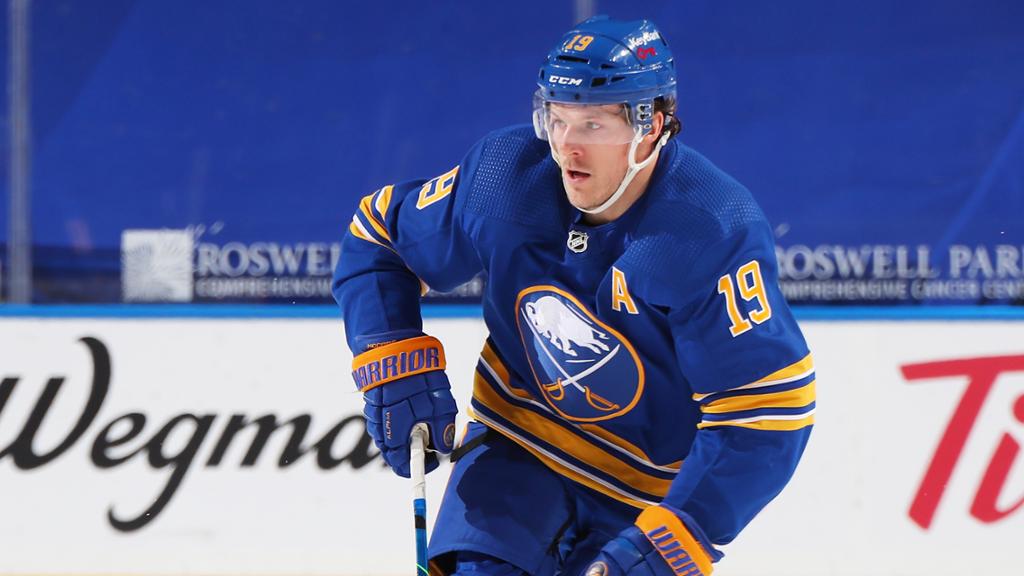 The National Hockey League announced today that Buffalo Sabres defenseman Jake McCabe has been added to the NHL’s COVID-19 Protocol List. He will not be available for practices, travel or games until he is removed from the protocol.

Four other players are also currently in protocol. Forward Taylor Hall and Rasmus Ristolainen were added to the list Tuesday, and forward Tobias Rieder and defenseman Brandon Montour entered protocol on Wednesday.

Buffalo’s practice facilities were closed indefinitely Tuesday, and the NHL postponed all Sabres games at least through February 8 as a result of Hall and Ristolainen entering the NHL’s COVID Protocols.

Throughout the 2020-21 season, the NHL is sharing the names of players who are “unavailable” to teams due to COVID protocols. This list is updated daily by the NHL.

No additional detail will be provided either by the League or the team, including the precise reason a player is unavailable or how long he might be out.

McCabe has three points (1+2) in 10 games this season. He also leads the team with 2:33 of shorthanded ice time per game on the NHL’s 10th-ranked penalty kill unit.

The NHL is in the process of reviewing and revising the Sabres’ regular-season schedule and it is expected that a decision on next week’s games will be made in the coming days.

Also, in order to continue to mitigate the risk of incidences of exposure and contraction of COVID-19 when Players and other Club Personnel are at, and interacting in, the Game Arena, the NHL announced today a series of additional COVID-19 preventative measures.

Beginning with today’s games, all Clubs must implement the following:

Removal of Shielding Behind the Bench: To allow for air flow to more easily move away from the benches where Players and Coaches are in close proximity to one another during games, effective today, Clubs/Arenas will remove the partitions of shielding that are behind the home and visiting team benches.

Limitation of Time at the Game Arena: In order to minimize (to the extent practical) the period of time for possible exposure and transmission of COVID-19 while Players are gathered at the arena, effective today, Players and Coaching staff are being advised, whenever practicable, to arrive at the Game arena no more than 1 hour and 45 minutes before puck drop, except to receive necessary treatment or to engage in preparations in advance of the Game. On game days (and non-game days), meetings shall be conducted virtually, to the greatest extent possible. Further, Players should leave the arena as expeditiously as possible after the conclusion of each game.

Physical Distancing in Team Spaces: In order to reduce to the extent possible the number of Players in a room at the same time, each Club shall take steps to utilize (or create where necessary) additional locker room space for the home and visiting teams, such that physical distancing of a least six (6) feet between players at each of their stalls is accomplished. Each Club shall communicate its specific plans to the League in this regard, by no later than Wednesday, February 10. The League will provide information regarding portable locker room stalls to Clubs that will be building out new space to meet this requirement.

Air Filtration and Air Cleaning: The League is considering adoption of a requirement for Clubs/Arenas to deploy portable air cleaners with HEPA behind the Player bench areas, in order to improve indoor air quality and mitigate airborne viral transmission. The League will send a further communication to Clubs/arenas once it has specific requirements in this regard.

The League will continue to explore additional preventative, and detective measures, and will communicate to Clubs any further requirements in this regard to ensure the safety of all Players, Club and Arena Personnel and our fans.