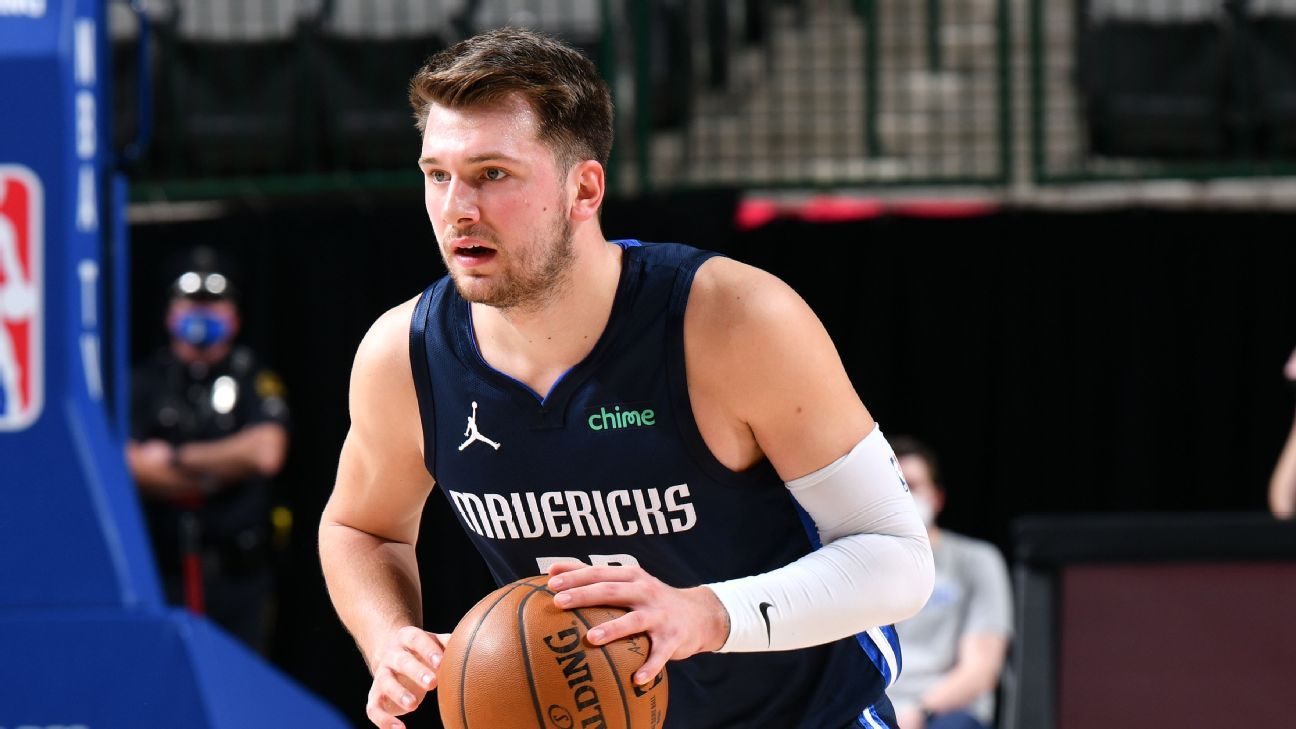 DALLAS — Luka Doncic hasn’t had a lot of reason to flash his infectious smile lately. He is a firm believer in the professional benefits of enjoying basketball, but that’s difficult to do when his Dallas Mavericks had lost 10 of their previous 13 games, as was the case when he reported for work Saturday night at the American Airlines Center.

Give Golden State Warriors star Stephen Curry an assist for bringing back Doncic’s joy. Even in an empty arena, there’s nothing that electrifies an NBA atmosphere quite like Curry cooking. That was certainly the case on Saturday, with Curry going 11-of-19 from 3-point range and swishing a flurry of silly shots, the kind that make you cackle out loud, en route to 57 points.

Doncic gleefully accepted Curry’s spectacular performance as a challenge. He responded with an outing that reminded a national television audience why this 21-year-old entered the season with the weight of MVP expectations, matching his career high with 42 points and dishing out 11 assists to lead Dallas to a thrilling — and desperately needed — 134-132 win.

“Obviously, going against Steph is fun,” Doncic said. “I’ve got to have more fun playing the game to be who I was before. I’ve just got to get back to enjoying the game.”

If you didn’t enjoy Saturday’s contest, basketball probably just isn’t the sport for you. Or perhaps you’re just a bitter soul. How else to explain not smiling when you see Curry do an exaggerated shoulder shimmy on the half-court logo after draining a transition pull-up from there? How can you not appreciate the artistic beauty of the best shooter in NBA history dancing with his dribble before draining step-back 30-footers with a hand in his face?

“What Steph does is something unbelievable,” Doncic said. “I just think every shot is going to go in when he shot it. It’s unbelievable the way he plays the game, and it’s enjoyable to watch, even if you’re on the opposing team.”

As Mavs coach Rick Carlisle said of Curry, “He’s one of the guys that I’d pay a lot of money to watch play.”

Doncic, who trails only Curry among guards in the All-Star voting early returns, is definitely another player to fit that category. It’s not just Doncic’s ability to stuff box scores — he now has all six 40-point, 10-assist performances in franchise history, for example — and create highlights that makes him worth buying a ticket or at least turning on the TV to watch. He is an entertainer with a rare flair for the moment, something he has in common with NBA legends that Carlisle has watched up close before.

“The basketball floor is his stage,” Carlisle said of Doncic. “Guys like him — and I was around [Larry] Bird; I was around Reggie Miller — when there’s another guy on the other team raising his game to the level that Curry was, you feel an obligation if you’re that kind of player. I saw Bird do it; I saw Miller do it.

Doncic never allowed Curry to seize complete control of the game. There were certainly stretches when Curry was unstoppable, but Doncic kept responding. Case in point: the final 90 seconds of the second quarter, when Curry capped his 30-point half with a cutting layup and a couple of long 3s and Doncic swished a 3 sandwiched by a pair of pretty floaters, giving the Mavs an eight-point lead at the break.

Doncic, one of the league’s lowest-percentage, high-volume long-range gunners, shot like a Splash Brother on Saturday night. He was 7-of-12 from 3-point range. And he got better as the stakes got higher, hitting 3 of 5 3s in the fourth quarter as the Mavs kept the Warriors at bay, the biggest giving Dallas a seven-point lead with 44.5 seconds remaining.

“His eyes lit up a little bit,” Curry said. “He made some big shots tonight.”

The Mavericks get the fortunate deflection after Tim Hardaway Jr.’s missed dunk, and Luka Doncic ends up with the ball and drills the deep 3-pointer.

Of course, a seven-point lead isn’t safe with Curry in sizzle mode. Curry cut the Mavs’ advantage to four points just seconds later by knocking down a 3 off a feed from Draymond Green (a point center who had his second consecutive 15-assist performance and who also is a pleasure to watch). Then, suddenly, it was a one-point game, after Curry danced and darted into the lane for an and-1 layup with 28.6 seconds left.

Imagine the pressure the Mavs felt in that moment, having lost 12 consecutive one-possession games, the third-longest such streak in NBA history, according to Elias Sports Bureau.

That streak, it’s worth noting, included only regular-season games. You might recall Doncic putting the exclamation point on a playoff masterpiece by hitting a step-back 3 to beat the overtime buzzer in Dallas’ Game 4 win over the LA Clippers last season. Doncic had a 43-point triple-double that night, when he was questionable due to a sprained ankle suffered about 36 hours earlier; it was a performance that eliminated any doubt that the youngster belonged in the discussion of the league’s best.

Stephen Curry is feeling it as he is up to 41 points after hitting a 3-pointer from the Mavericks’ logo at half court.

Back to crunch time Saturday night, the Warriors decided they weren’t going to let Doncic seal this game by scoring, sending a double-team at him 30 feet from the hoop as the shot clock ticked down. Doncic accepted that challenge by taking advantage of the tactic, delivering a bounce pass to Maxi Kleber, who was left alone in the corner and hit the dagger 3.

“He’s just very polished,” Curry said, tipping his cap to Doncic. “He’s shown that since his rookie year, and he’s gotten better. And who knows how high the ceiling is for him?”

It will be fun to find out.