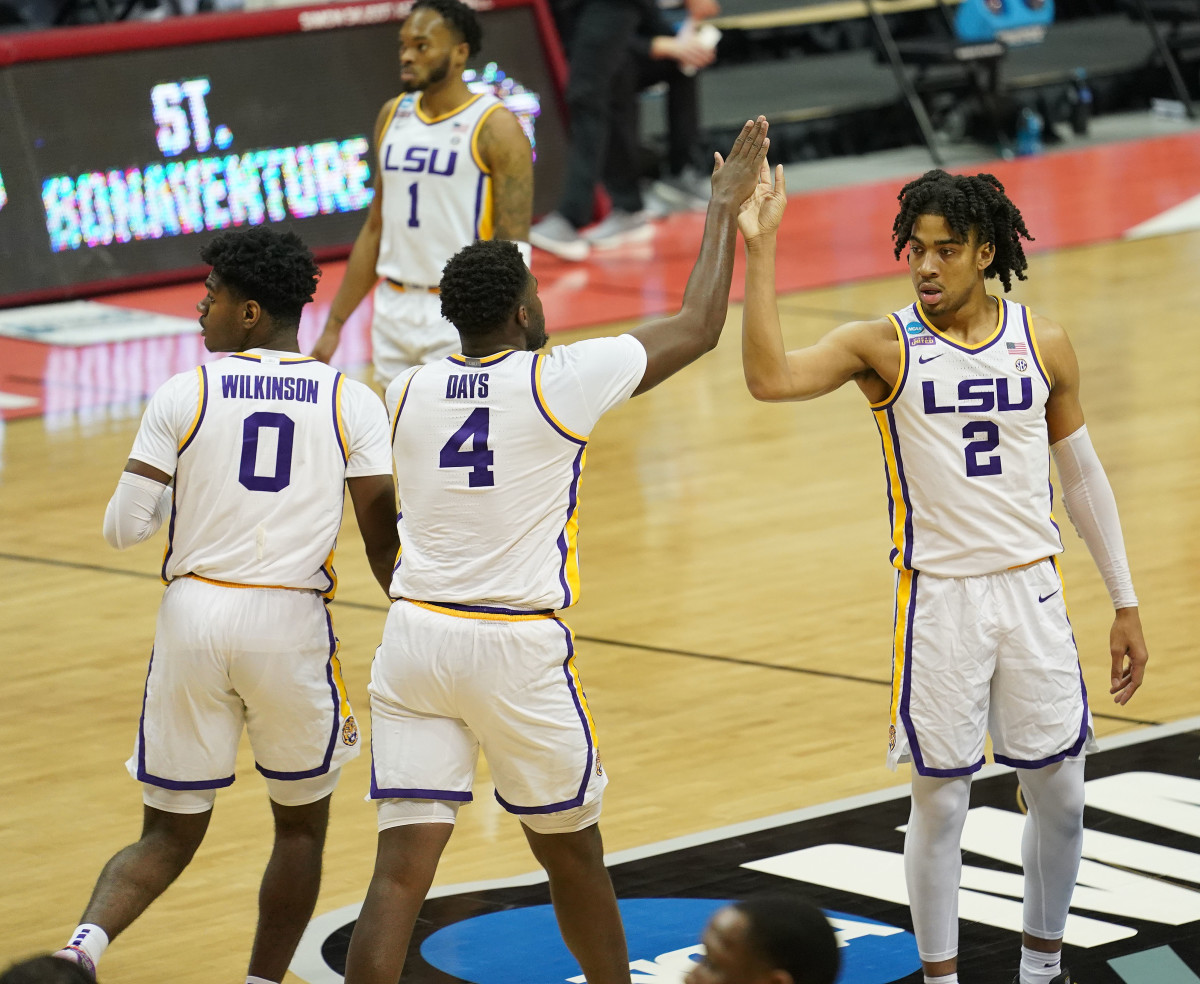 It wasn’t the type of game LSU would’ve won in the past but despite a slow start offensively, the Tigers were able to lock down defensively and control the boards in a 76-61 win over No. 9 seed St. Bonaventure.

Coming into this game, a crucial area that Will Wade knew the Tigers needed to win was the rebounding discrepency. Because of St. Bonaventure’s slower pace, the Tigers really needed to hold the Bonnies to one shot possessions, which was accomplished for the most part.

LSU was able to win the rebounding battle 44-29, including 13 on the offensive end of the floor.

St. Bonaventure was a team that wanted to dictate the pace with deliberate, longer half court sets. That’s not what LSU wants to do on offense as the Tigers came in as one of the higher paced teams in the entire country and through 10 minutes, the game was played at a pace the Bonnies were thrilled with.

The game was predicated early on with stellar defensive intensity on both ends of the floor as LSU and St. Bonaventure started a combined 6-of-34 from the field. For as much as the Tigers struggled on offense to open the game, their defense was equally impressive.

The Bonnies were missing shots, yes, but the effort and intensity that hasn’t always been there for this team on defense this year, was certainly there Saturday afternoon. St. Bonaventure shot just 23% from the field in the first half including an abysmal 0-for-10 showing from beyond-the-arc. The Tigers were contesting shots and the active hands of Aundre Hyatt, Josh Leblanc and the LSU guards, as well as the closeouts on the perimeter kept the Bonnies completely out of sync.

“We guarded and that kept us in the game,” Will Wade said. “We went on a spurt there at the end of the half. I thought our guys were locked in and really prepared and we’re gonna need to turn it around quick.”

Hyatt in particular left a lasting impact on this game as he stuffed the stat sheet and made the winning plays. He finished with 13 points and 10 rebounds, seven of which were on the offensive end. He was the x-factor that LSU needed as his activity on both ends was the difference maker.

“Aundre played great. He was on the offensive glass, defensive glass and made big shots when he needed to,” Cam Thomas said. “We’re gonna need Dre to make a big push in the tournament so this was a great starting point for him.”

LSU was finally able to go on a crucial stretch in the middle of the half where it drained 8-of-11 shots and go on a 10-2 run, including three triples to take a 29-18 lead at one point in the half. After putting just four points up during the first nine minutes of the game, the Tigers were able to settle into more of a rhythm by attacking the rim and getting to the free throw line.

While during the first half, neither team could find much consistency on offense, the second half was dominated by scoring. LSU scored six straight to open the half to take as big as a 16-point advantage in the opening minutes of the second half but the Bonnies finally got the three ball to start dropping.

LSU kept attacking the rim in the second half while continuing to control the glass, keeping St. Bonaventure at a double digit distance for most of the half. Cam Thomas in particular was able to get to the free throw line plenty by attacking the rim, going 11-for-13 at the charity stripe despite a 7-for-18 day from the field, finishing with a game high 27 points.

His playmaking was on full display during the final 20 minutes as LSU built a comfortable lead it was able to sustain. Darius Days got into double figures which is always a positive with a 13-point, 11-rebound effort while Trendon Watford added 11 points and 11 rebounds.

“In the second half I just wanted to attack the basket. My threes were off in the first half so I had to get going,” Thomas said. “Shots weren’t falling and we had to really lock in on defense. The gameplan was to get them out of the paint and contest shots and that’s what we did.”

Up next for the Tigers is a likely date with No. 1 seeded Michigan.

The Knickerbocker Field Club, a Hidden Tennis Club in Brooklyn