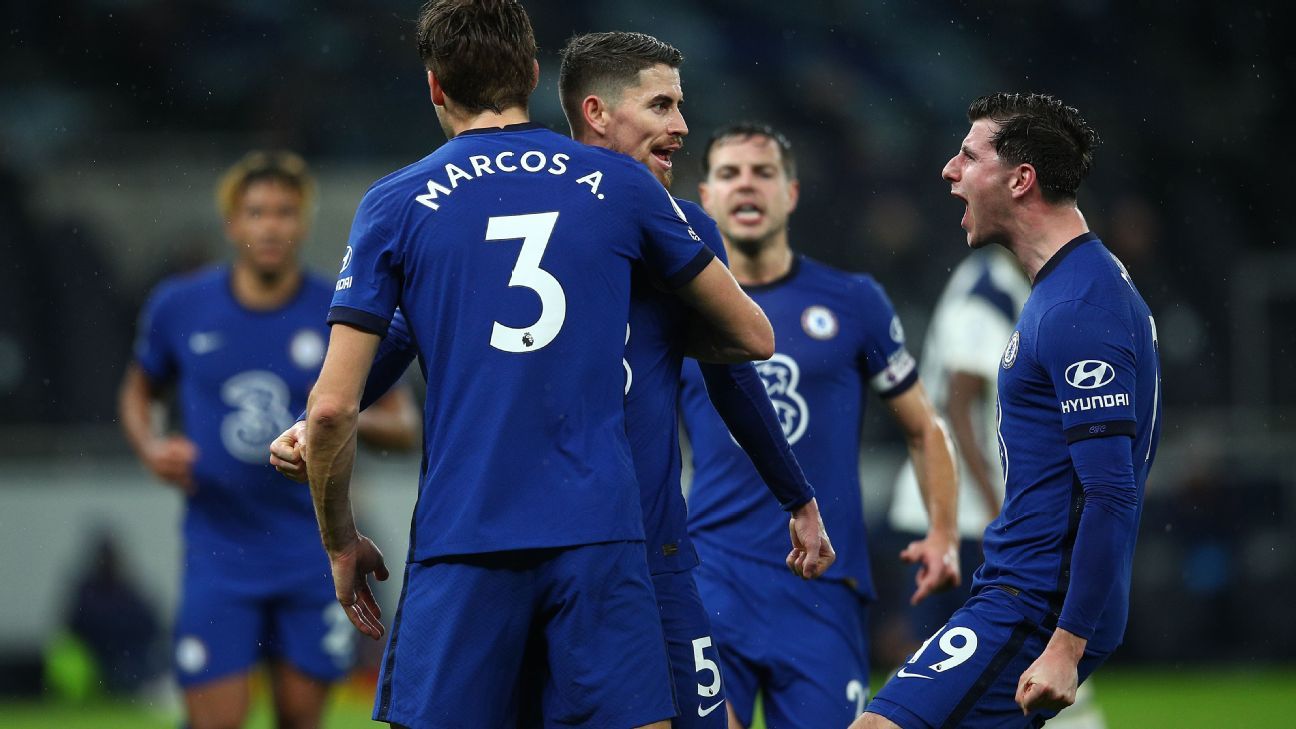 After an impressive first-half performance, Chelsea held on for a 1-0 win over Tottenham Hotspur on Thursday in north London, leapfrogging their hosts and climbing to sixth in the Premier League table.

Thomas Tuchel’s side dominated the early stages of the contest, and were rewarded with a penalty after Timo Werner had been taken down inside the area by Eric Dier, with Jorginho duly converting the spot kick. Jose Mourinho made adjustments at half-time and Spurs were fare more menacing in the second period, but the visitors bent but never broke, securing all three points.

Chelsea showed brilliant intent from the very first whistle, dictating the tempo of the game and dominating the ball, playing with a great deal of fluidity. The Blues also can take pride in a third straight clean sheet kept under Tuchel, with Tottenham exerting considerable pressure in the closing stages as they searched for an equaliser.

The wastefulness. Chelsea carved out several gilt-edged chances in the opening 45 minutes but only had the solitary goal to show for it. As Spurs pressed in the second half, opportunities presented themselves in transition, but the west Londoners were unable to convert and left themselves in a precarious position in the games closing minutes.

Manager rating out of 10

8 — Tuchel’s side completely outclassed Spurs in the first half. Mourinho’s adjustments at the interval tipped things in the hosts’ favour, and the Chelsea boss’s substitutions didn’t quite inject his side with the impetus to swing the balance back the other way, but ultimately his system created opportunities — his attacking players just too often failed to convert them.

GK Edouard Mendy, 6 — Made a few saves but a lot of them were fairly routine, with Erik Lamela’s effort from range being his biggest test.

DF Cesar Azpilicueta, 7 — Played some superb passes through to Werner and Mason Mount, while remaining typically resilient in his defensive work. Booked for a late foul on Son Heung-Min.

DF Thiago Silva, 6 — Read Spurs’ attempts at attacks brilliantly and looked in full control whenever called upon before being forced off through injury.

DF Antonio Rudiger, 7 — Did a good job of stepping out of defence with the ball and got in good tackles whenever they were required of him.

MF Reece James, 7 — It looked like the right-wing-back would create a chance whenever he had the ball in an attacking area, whether that was through a cross or intelligent pass. James also defended well.

MF Mateo Kovacic, 6 — Carried the ball brilliantly, though he panicked during one run, wasting a good chance to close out the contest. He put in some good defensive work, especially to stop Tanguy Ndombele.

MF Marcos Alonso, 7 — Continued to look confident, as has been the case since Tuchel’s introduction, getting some good passes off and defending fairly well in the second half. May have hoped for better quality in the final third.

FW Callum Hudson-Odoi, 6 – Was direct in his play but the end product was slightly lacking at times.

FW Timo Werner, 7 — The Germany international almost scored within 30 seconds and continued to look bright, winning the penalty that secured the game’s only goal.

FW Mason Mount, 8 — Was central to a lot of Chelsea attacks, picking out great pockets of space and showing real creativity in his passing. Was denied a goal by a good save from Hugo Lloris.

DF Andreas Christensen, 7 — Replaced Silva in the 36th minute and settled into the game easily. Even when Spurs upped their game, Christensen defended with authority, getting his head onto crosses and making some timely interceptions.

FW Christian Pulisic, 6 — Replaced Hudson-Odoi in the 65th minute and made some great runs forward. Was booked for a late challenge.

MF N’Golo Kante, N/R — Replaced Kovacic in the 73rd minute and was booked for a foul on Lucas Moura. Generally showed good awareness through his defensive work.

Mundelein’s Fathallah hoping to make the best of short season