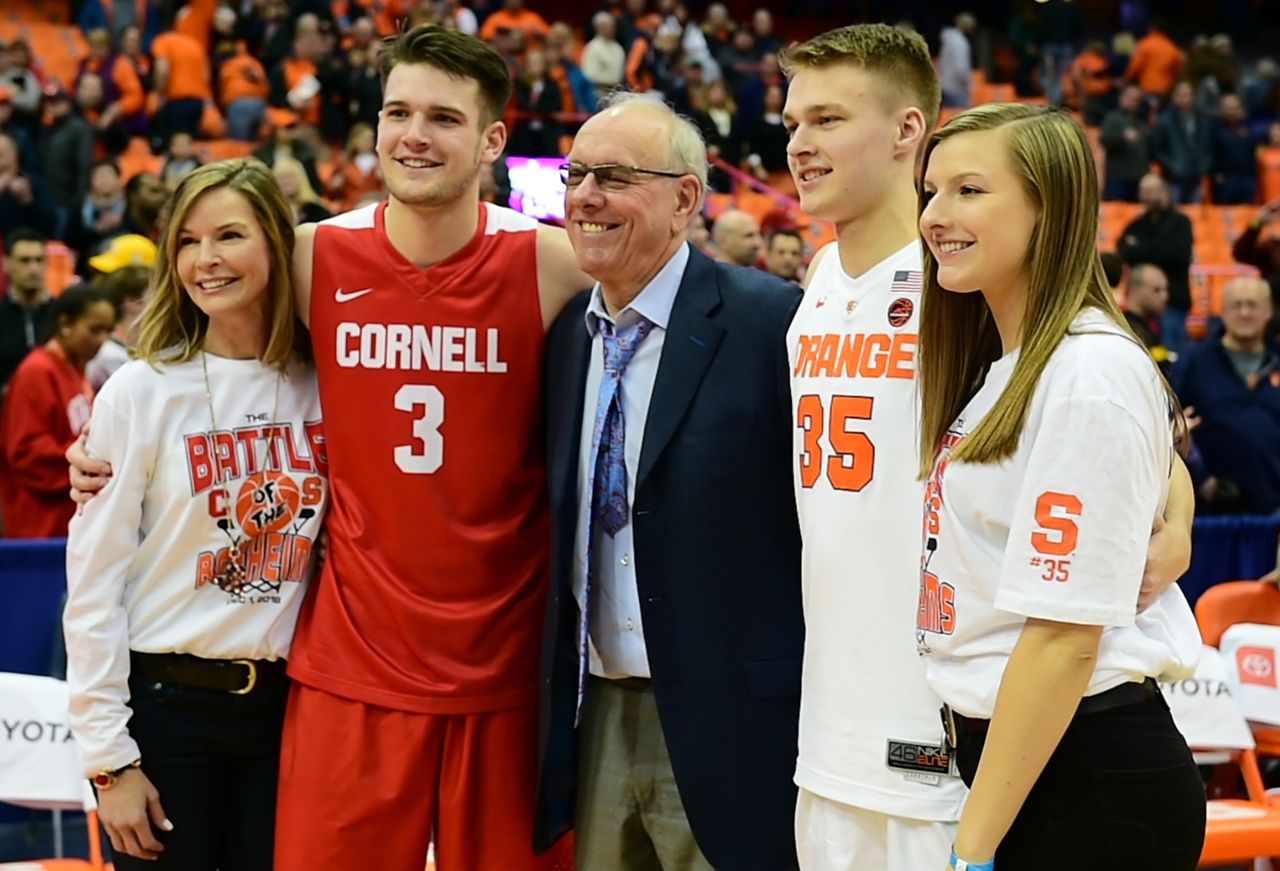 The eldest son of Jim and Juli Boeheim will transfer to Syracuse from Cornell for his final season of college basketball. His decision allows him to play for his father and with his younger brother, something that has never happened in Boeheim basketball family dynamics. The move also allows Jimmy to continue his collegiate career after the Ivy League canceled its 2020-21 season because of concerns about Covid-19.

Jimmy Boeheim always believed he would finish his career at Cornell, a place where he had carved his own identity, a place that took a chance on him as an unrecruited high school senior. He felt loyalty to the program, its coaches and the friends and teammates he’d developed bonds with over four years.

But after a year of Covid that wiped out entire seasons of Ivy sports, Jimmy Boeheim altered his mindset and allowed himself to fantasize about playing a final season in a Syracuse uniform.

“I honestly think the possibility of playing with my brother and for my dad and for the program that made me fall in love with the game outweighs the other part you mentioned,” he said. “I love Syracuse. I never stopped loving Syracuse. So it was pretty much a no-brainer.”

Boeheim entered his name in the transfer portal last November. Back then, he said, he wanted to explore the possibilities, to see what was out there.

He spoke, he said, with “a good amount of programs” that made contact, but nothing advanced to a serious stage. Later in the process, a couple ACC coaches reached out to his dad to ask whether Jimmy would be headed to Syracuse or whether he was legitimately looking for a new college landing spot.

Jimmy Boeheim, a left-hander, averaged 16.5 points, 5.6 rebounds and 1.9 assists his final season at Cornell. He shot 43% overall and 29.5% from the 3-point line. He is 6-foot-8 and after a year of working to sharpen his athleticism and gain strength, he now weighs 225.

He thought, probably by last January, that he would ultimately end up in Syracuse, though until the churn of the transfer portal subsided and Marek Dolezaj definitively declared his intentions, he was never certain of his destination.

He last played with his brother, Buddy, in an organized basketball setting when they were both students at Jamesville-DeWitt.

Jimmy Boeheim has never played for his father, though the stories about Jim Boeheim overseeing his sons’ one-on-one games and abandoning his officiating duties after Jimmy and Buddy invariably ended up in a teary competitive scrape have become Boeheim family lore.

As a soon-to-be Cornell graduate with a degree in business and a concentration in finance, Jimmy Boeheim believes he’s “mature enough” to navigate the coach-son relationship.

“I’m excited for it,” Jimmy said. “I think I can handle coaching pretty well. So I’m sure he’s going to get on me, but I’m looking forward to having to separate on-the-court from real life and I think we’ll be able to do that. We’ll both know how to handle that.”

As for the pressure of being a Boeheim and playing for a Hall of Fame Boeheim, Jimmy has performed his whole basketball life beneath that big umbrella of scrutiny.

“At this point, I know it’s there,” he said. “There’s nothing I can do about it. I feel pretty loose, to be honest with you. I’m not thinking about it too much. I’m just going to play my game. I’ve put in the work. I’m just going to trust my work and do whatever I can to help this team.”

Syracuse in 2021-22 will have Villanova transfer Cole Swider and five-star recruit Benny Williams at the forward spots. Quincy Guerrier has declared for the NBA Draft and could return to Syracuse if what NBA executives tell him does not square with what he wants to hear. Alan Griffin has entered his name in the NBA Draft and expects to sign with an agent, thereby ending his college career.

Jimmy Boeheim said friends have asked over these last few months whether he would transfer to Syracuse, whether he would play in his hometown for his dad in the building that shaped his perspective on college basketball. He would tell them he wasn’t sure, that he was being recruited by other programs, that he had yet to finalize what he might do.

None of them, he said, truly believed him.

And in the end, he confirmed what many imagined might happen.

“It just feels right,” Jimmy Boeheim said. “I can’t wait. I’m really just counting down the days when I can get into the Melo Center. Just picturing my name on a locker there. My name on the back of a jersey. It’s honestly surreal. I never expected this was going to happen. My plan was always to stay at Cornell, graduate and use my eligibility up there. But given the circumstances of the last year, here we are. I really can’t wait. I’m counting down the minutes.”

NOTE – Jimmy Boeheim played three years at Cornell and has one season of college eligibility left. The NCAA awarded everybody a free Covid year to compensate for the disruptions of 2020-21, but because Cornell did not play at all last season, that free year does not apply to Cornell athletes, he said.

How have ACC schools mined the transfer market? Ranking the top 10 transfers into the ACC

How will Syracuse recruit players like JJ Starling with older guards on the roster? (Mike’s Mailbox)