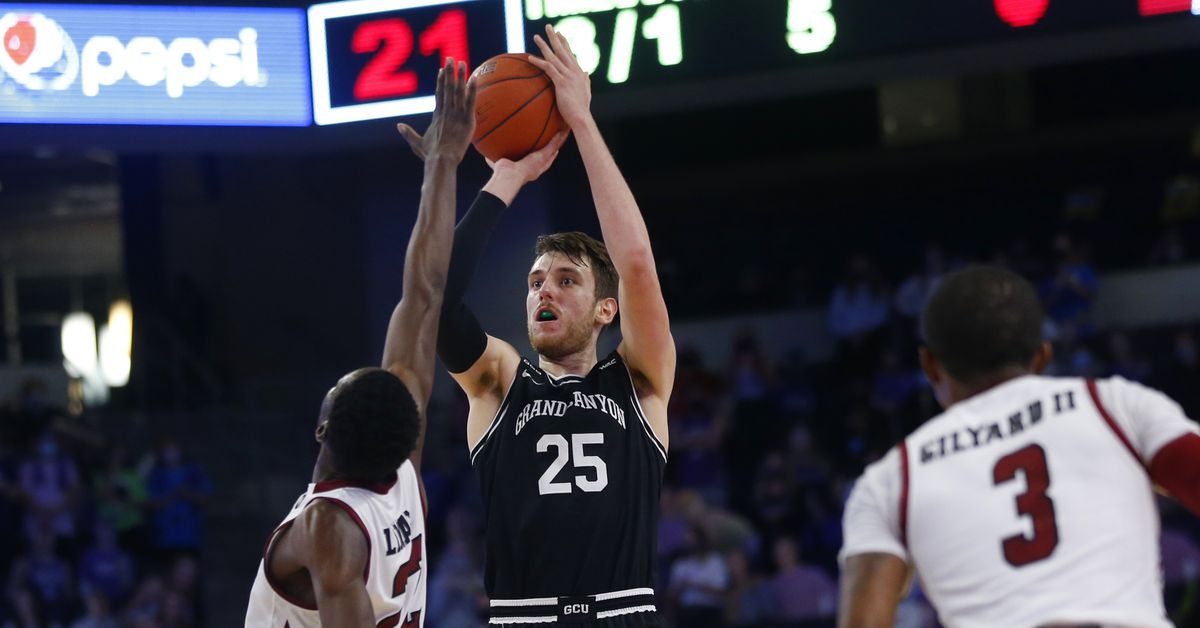 There’s no getting around it: the Grand Canyon Antelopes (17-6, 9-3) are big. With the 7-foot Asbjorn Midtgaard and 6-foot 10 Alessandro Lever holding down their starting post positions, their average height comes in at 77.4 inches, 101st in Division 1 but 2nd in the WAC, according to KenPom ($).

Yet that doesn’t even tell the whole story, as their effective height – essentially differential between their centers/power forwards and an average center/power forward – comes in at 12th in the nation. They’re just five spots ahead of Iowa, though the math changes without backup (and 6-foot-11) Jack Nunge.

Midtgaard leads the Lopes with 14.0 points and 9.9 boards, 2.7 of which are offensive. His field goal percentage of 71.2% ranks second in the country, per KenPom. Synergy Sports has him at 50 points on 35 “offensive rebound” possessions which ranks in the 89th percentile, including getting to the free throw line on 46% of those possessions. He’s also nifty as a cutter (1.512 points/possessions) but really makes hay posting up. His 1.156 PPP ranks 3rd among guys with over 100 post ups and above Luka Garza, who is 10th at 1.073.

Garza, to his credit, allows well below that when defending post ups, at .739 PPP, including free throw attempts on 10% of possessions. That’s where it could get tricky for Iowa – if Garza does find himself in foul trouble, as he did against teams with scoring bigs like Indiana and Iowa State, Iowa will likely go with Keegan Murray as the 5 (though Josh Ogundele may be an option). Murray, though exceptional as a weakside defender, allows 1.118 points over the limited possessions he’s been assigned to a post up.

Playing a hypothetical on a hypothetical, I would expect Iowa to grant Murray significant help by way of double teams if forced into extended center minutes. Mitgaard already struggles with turnovers, at 2.1/game (TO rate = 22.5%). When the defense doubles, his turnover rate stagnates above 20%.

With Mitgaard averaging 28 minutes per game, coach Bryce Drew will structure the rotations so Lever gets the bulk of the remaining “center” minutes. While he is similarly capable as a post scorer (1.072 PPP), the Italian sets himself apart as the Lopes’ best shooter, at 39.4% on 3.4 attempts from deep/game. With Iowa’s next tallest starter at a relatively diminutive 6-foot 6 (Joe Wieskamp) he can shoot over pretty much anyone Iowa could throw at him.

Both Mitgaard & Lever are exceptional at drawing fouls, at 5.0 & 4.3 per 40 minutes played, respectively, though struggle at the free throw line relative to the rest of their offense. They are GCU’s most voluminous free throw shooters and make 71% & 62% of their shots from the stripe. As a team, they shoot just 69.2% from the charity line, 232nd in the country.

While it is easy to hyper-focus on what Grand Canyon’s two bigs are capable of, it’s worth remembering a couple different things: 1) Iowa has seen this movie before, 2) Grand Canyon hasn’t.

The Hawks have played five teams (North Carolina, Michigan, Purdue, Wisconsin, and Minnesota) who rank in the top 30 of effective height and are 6-2 against them. Only twice did Iowa allow their opponents to make 50% of their two point attempts – at Minnesota (L) and the second game against Wisconsin (W). In two other instances, Iowa was susceptible to offensive rebounding. Both North Carolina and Wisconsin in Madison rebounded over 30% of their misses and both of those were double digit games for the final 5+ minutes.

Grand Canyon, on the other hand, has not seen a single guy like Luka Garza on their schedule. Among their Division 1 opponents, the tallest starters averaged a collective 8.5 points and 5.9 rebounds. Those totals are buoyed by Gorjok Gak (13.5 / 10.3) & Fardaws Aimaq (13.9 / 15.0 !!!), both 6-foot 11, whose teams split with GCU down the stretch in their back-to-back schedule.

To their credit, the Lopes were able to restrict the above sampling to a reduction in 1.4 points, 0.9 offensive rebounds, and ~10% eFG%, they were simply never faced with a guy like Garza. A similar reduction for LG would look something like Iowa’s 79-66 win over Rutgers where he scored an inefficient 22 points (8/20 shooting) but still had incredible activity levels with 10 boards (4 on offense) and a number of forced fouls.

With Grand Canyon’s unique size, they can absolutely force Iowa’s hand if the Hawks are unprepared or lacking in effort or intensity. It is why Fran McCaffery preaches the “there are no upsets” mindset – each one of these teams went through a lot to get to this point and is capable of knocking off anyone. Yet it is easy to be intrigued by the new kids on the block, especially when they match what is viewed as Iowa’s greatest strength.

Let’s not forget what Garza forces teams to do, night after night, as Iowa racked up their best regular season in a generation. He’ll have the same impact on Grand Canyon.