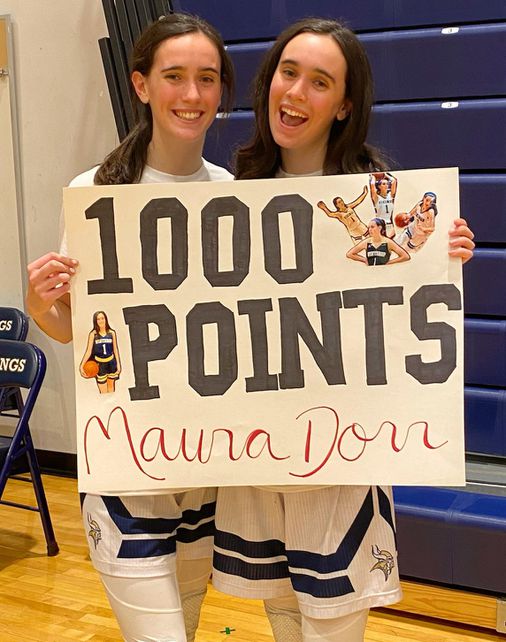 In embracing the challenge of being a three-sport athlete, Winthrop’s Maura Dorr has emerged an undeniable triple-threat scorer

Dorr was a little slow getting up, but she eventually hopped to her feet and returned to action. Even on a night in which she became the fifth girl in program history to reach the 1,000-point plateau, Dorr still sacrificed her body for the better the team.

A 5-foot-10 wing, Dorr ultimately netted her 1,000th career point converting a high-low pass from her twin sister, Jenna, midway through the second quarter and celebrated with her family after the game. She finished with 19 points that night, 15 in a victory over Saugus on Thursday, and 17 more at Gloucester last Friday. She enters Wednesday’s NEC matchup against Beverly with 1,039 and is also approaching 1,000 career rebounds for the Vikings (7-1).

Off the court, she is also the career scoring leader for the Winthrop girls’ soccer team, and third on scoring list for the girls’ lacrosse team — despite missing seasons (spring 2020, fall 2020) for both because of the COVID-19 pandemic.

Dorr has also been vice president of the Student Council all four years — Jenna is the president — and together, the twins have cemented their individual and collective legacies at Winthrop High School.

While Maura has 1,000 points, Jenna has over 100,000 TikTok followers (it’s OK, Maura insists. She doesn’t want that type of fame). They also appeared together in Vogue Magazine in 2017 and can often be found side by side impressing in whatever they do. Sometimes they bicker (“When I’m bossing her around,” Jenna says), but they always make up quickly.

“I think we just work really well together and we make a good team,” Jenna said.

Maura considers basketball her favorite sport, but has played soccer for years and has invested countless hours into lacrosse since ninth grade. She loves the variety of playing three sports and appreciates that her coaches encourage her to do as much as possible.

Jenna credited her sister for dedicating herself to each of her crafts and leading by example in everything she does. Especially this year, when remaining task-oriented can be difficult at times, she’s seen Maura consistently go to the gym and sharpen her skills during scheduled off days.

“She really doesn’t like to stop,” Jenna said. “She’s always working hard, in challenging times, and motivating other people to do the same.”

Lowe is grateful that Dorr includes younger players and makes sure they have the same resources she and the other seniors do when they want to improve. The second-year Winthrop coach called her growth and maturity “really special,” flashing back to a head-scratching setback last year when Dorr scored just 1 point in a winnable game vs. Danvers.

At the time, she looked at Lowe quizzically, with her palms up, as if to relay to him she wasn’t sure why the Vikings were struggling either. That one moment was it, and then it was back to work and back to making everyone around her better. She didn’t pout, didn’t complain, and just kept playing. The Vikings regained their form and advanced to the Division 3 North semifinals as the No. 6 seed, upsetting third-seeded Whittier and finishing the season 15-8.

As Dorr — who is shooting better than 50 percent and leading the team in assists this season — approached 1,000 points, she continued to play with the same habits and didn’t lose her edge. When an assistant coach asked Lowe if he wanted to run a special play to have the Dorr twins connect for the milestone, Lowe decided not to do so and to let the moment unfold naturally. It ended up not mattering, as fate brought them together once again.

Hitting 1,000 would have been sweet regardless, but it was even more special because her sister was the one who passed her the ball.

“It was really, really exciting and special,” Maura Dorr said. “Even though there couldn’t be a packed gym, I was really happy that my family was there, and my teammates and coaches.”

▪ First-year Arlington Catholic coach Jake Feraco learned that he would be taking over for Ken Small in early December. It’s been a transition year for the program with just six returning varsity players and a 3-7 record in the Catholic Central League.

“It was definitely a challenge when you really don’t have a lot of experience returning — especially for the league we play in,” Feraco said. “You can’t play a bad game in this league.”

Feraco, who served as an assistant under Small last season after coaching previously at the now-closed Pope John in Everett, has focused on the positives. One is freshman Cecilia Kay. The 6-foot forward is averaging an impressive 19.9 points, 13.3 rebounds and 4.5 blocks per game.

“She’s got to be the most coachable, hard-working kid I’ve had,” Feraco said. “She’s just an absolute delight to have at practice and in games.”

▪ When Rockport junior wing Kylie Schrock reached the 1,000-point milestone on Jan. 13, joining a long line of hoop players in her family who also accomplished the feat.

Her grandfather, Jerry Schrock, hit 1,000 points at Green Springs High in Ohio, as well as at Baldwin Wallace University, where the former three-sport standout is a member of the college’s Hall of Fame. Her uncle, Chris Schrock, who went on to punt in the NFL for the Denver Broncos and Philadelphia Eagles, netted the grand total at Hamilton-Wenham (Class of 1988). Her sister, Whitney Schrock scored 1,000 at Gloucester High (Class of 2018).

Schrock joined the Rockport varsity squad in eighth grade. This year, she is second in the Cape Ann League in scoring (13.4 ppg.). Considering she is returning from ACL surgery last May, Schrock feels proud of the achievement.

“I honestly think I’m the same — maybe even better, because I did work a lot,” she said.

▪ Bridgewater-Raynham coach Cheryl Seavey notched her 100th head coaching win on Friday in a 66-42 win over Brockton. Seavey has won 88 of her 100 contests with B-R since starting in 2015, with 12 other wins coming at Middleboro from 1997-1999. The Trojans are 8-0 overall and 7-0 in the Southeast Conference this season.

▪ In the absence of MIAA-sponsored tournaments, the Catholic Central League and the Patriot Leagues have scheduled postseason tourneys this month. The CCL Cup will tip off Feb. 11 and the Patriot Cup starts on the 12th.