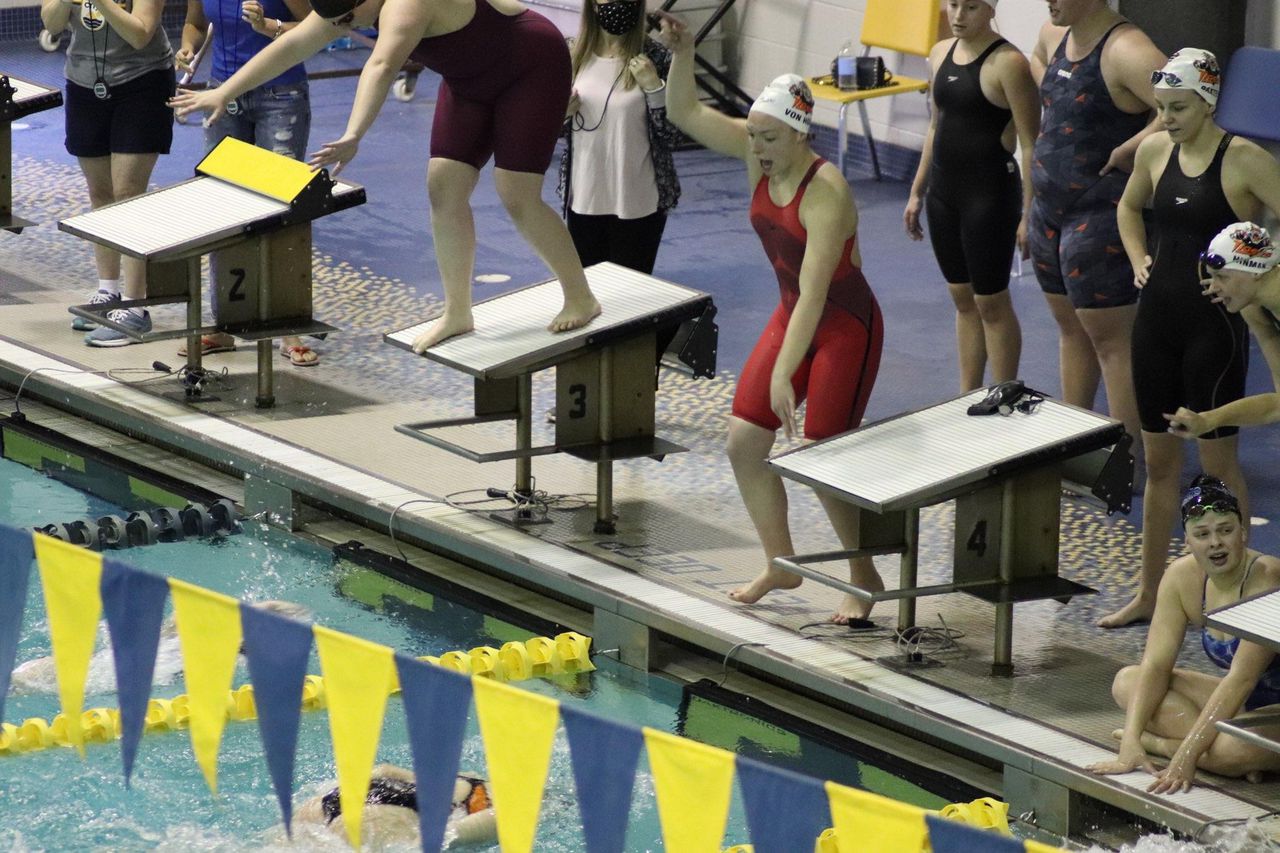 With their undefeated record on the line entering the final event of Tuesday’s road meet against Skaneateles, four members of the Mexico girls swim team came through in the biggest way possible. Needing at least a second-place finish in the 400 freestyle relay for the meet victory, the Tigers finished the race less than one second behind the Lakers to move to 6-0 on the season.

“We had a quick kind of huddle before and said, ‘No DQs, we just need this (second place), but go for first,’” Mexico coach Shawn Parkhurst said. “The girls knew, so I think they were excited. … This is definitely, by far, the best record that girls Mexico swimming has had.”

The 2007 Tigers girls swim team went 7-3 and finished second in sectionals, but Parkhurst said this group has been special.

“For us to be 6-0, and we’re a small school, for us to be able to come out with dual meet wins is huge for our program,” he said.

In the deciding 400 freestyle relay, the Lakers crew of Hana Spaulding, Elizabeth Springer, Grace King and Ashley Drotar finished with a time of 3:44:15. Mexico’s foursome of Alexa von Holtz, Riley Baxter, Abigail Hinman and Carolyn Zedack registered a time of 3:44.39, or as Parkhurst said, “a fingernail” behind Skaneateles.

“It’s like two heavyweight boxers throwing punches at each other and seeing who was going to fall first,” he said.

“It was just a great meet by both teams and had some great races. It came down to every single point obviously,” Parkhurst said. “We were just happy to come out on top.”

The Brothers moved to 5-0 on the strength of a pair of individual victories by Ava Ascenzo, as well team wins in two of the three relays held Tuesday in their meet against the Bees.

CBA’s other winning relay team was the quartet of Ella Zaryski, Lauren Kelly, Jenna Flihan and Kami Petrosillo, who recorded a time of 2:04.52 in the 200 medley relay. Baldwinsville’s pair of event victories came via Makenna Williams’ time of 1:39.04 in the 100 breaststroke, and the foursome of Eva Smith, Madeline Sauro, Erin Gruppe and Ashley Konz in the 400 freestyle relay (4:13.31.)

The Northstars had their sixth straight victory on Tuesday on the road against the Spartans.

C-NS was led by Alayna Harbaugh and Bryn Myers, who each collected a pair of victories in individual events, while Harbaugh was a member of both Northstars’ relay-winning groups and Myers was part of one. Harbaugh grabbed first in the 50 freestyle (26.26) and 100 freestyle (59.16), and Myers finished in front in the 200 freestyle (2:08.78) and the 500 freestyle (5:49.40.)

Harbaugh and Myers joined Kate Gucciardi and Brittany Wood in the victorious 200 freestyle relay group (1:47.42), while Harbaugh was also a member of the 200 medley relay with Gucciardi, Wood, and Cassidy Svoboda, who finished in 2:01.06. New Hartford’s top performer was Emma Burke, who registered wins in the 200 individual medley (2:18.18) and 100 butterfly (1:00.98.)

After starting the season 0-2, the Northstars now hold a record of 6-2.