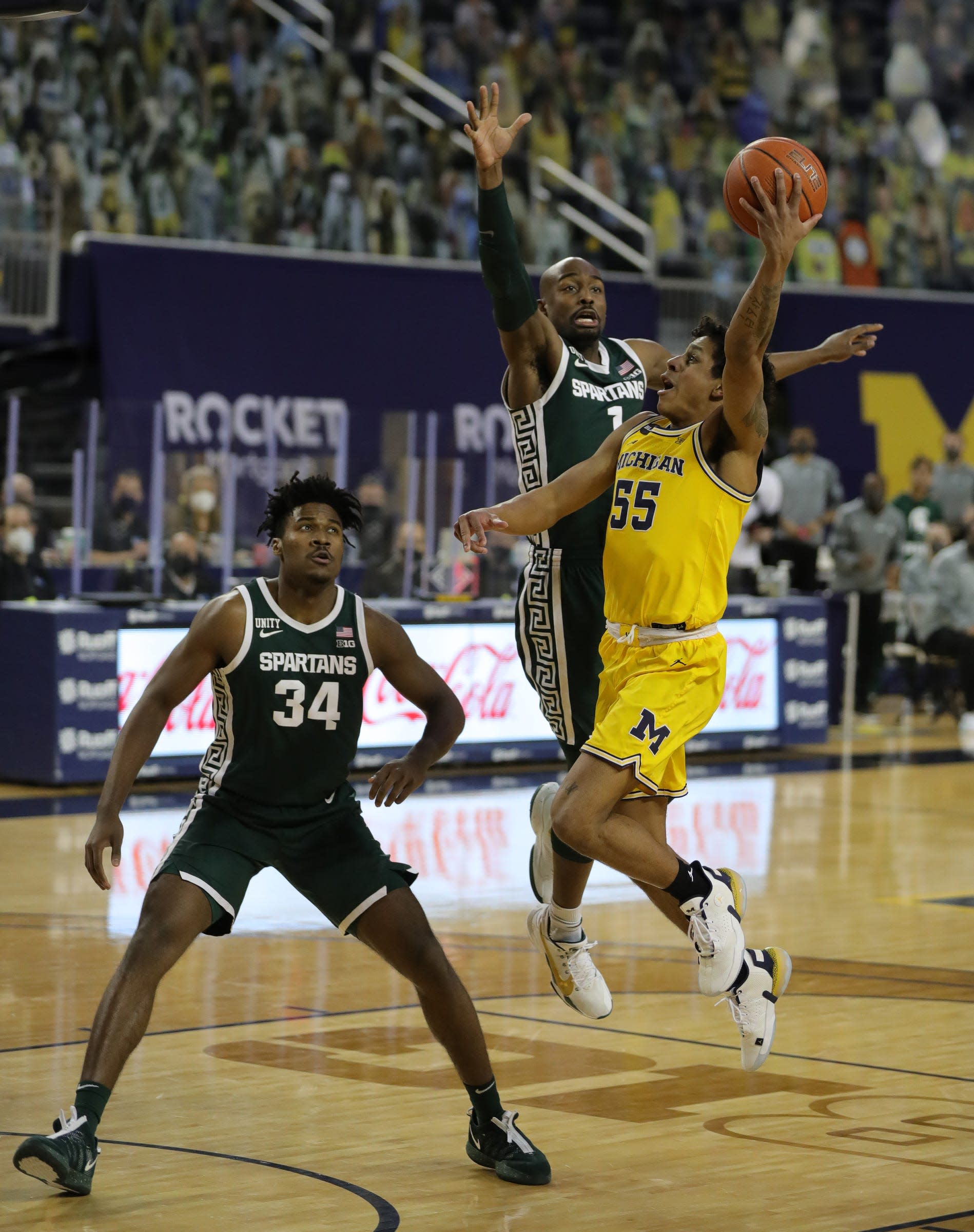 How each team can win rematch at Breslin

Of course, the second-ranked Wolverines already locked up the outright Big Ten title Thursday with a 69-50 blowout in Ann Arbor. U-M will be playing Sunday solely for rivalry pride; the Spartans, though, will be fighting to get Izzo and themselves a 23rd straight NCAA tournament berth.

[ MSU vs. Michigan predictions: Who will win rematch in East Lansing? ]

The Spartans are still building their case for the NCAA selection committee despite finishing below .500 in conference play for the first time in Izzo’s 26 seasons. An upset of the Wolverines — which would be their third win over a projected 1- or 2-seed in the past two weeks — also would ensure that MSU would avoid its a first .500 finish since 1995-96, Izzo’s first season as head coach.

Here are three areas MSU must improveto split with the Wolverines and enter the Big Ten tournament with momentum.

MSU had few answers for Michigan inside in falling behind by 11 points in Thursday’s first half. The Wolverines started with guard penetration by Eli Brooks and Mike Smith, then moved to low post play by Hunter Dickinson on back-downs, and Brandon Johns attacked baseline and on the low block. The Spartans gave up 20 points in the paint in the first half. That softened them up on the perimeter in the second half, and U-M hit five of 11 3-point attempts after the half while relying on Franz Wagner’s shooting. Izzo will need to unleash his best defensive guard combo early to prevent a similar start Sunday, which could mean using the length of Joshua Langford, Aaron Henry and Gabe Brown to help seal driving lanes and pester the Wolverines on the perimeter. It should mean less Rocket Watts and Joey Hauser — both defensive liabilities — and less Thomas Kithier, who simply couldn’t handle Dickinson. More Julius Marble II at forward , and increased roles for A.J. Hoggard, Malik Hall and Marcus Bingham Jr. off the bench, could be the way to go.

[ Tom Izzo has two days to solve issues against Michigan ]

A few lack-of-hustle plays irked Izzo, particularly Watts not fighting for a loose ball early in the second half. Instead, the 7-foot-1 Dickinson hit the floor for it and turned it into a momentum-changing 3-pointer by Wagner. Dickinson moved Kithier, generally a solid positional post defender, off the block at will with backdowns. MSU’s offense often devolved to Henry going one-on-one as his teammates stood around waiting for something to happen. Brown attempted just two shots. Langford attempted 10, but made only two — not much better. The Spartans’ inability to run in transition showed where their energy levels were in their sixth game in 13 days — though Michigan also had a similarly difficult stretch, including four games in eight days. Many of these things are not coachable, and Izzo knows it: “I don’t think it was any fatigue stuff, unless maybe some of the effort is caused by fatigue,” he said. Will two days off between games, instead of one, re-energize MSU enough to generate a performance like the upsets of Illinois and Ohio State?

STATE OR RIVALRY: How Juwan Howard has built an edge on Tom Izzo

Izzo made a name for himself with his success on short turnarounds during the NCAA tournament, though prepping for the same opponent is a new experience. He has spoken with friends in NBA coaching circles about how they handle preparation; they told him it a series can become a chess match requiring adjustments from one game to the next. Juwan Howard, Michigan’s second-year coach, has experienced that, with six seasons as an assistant coach with the Miami Heat. Still, Howard doesn’t have many changes to make after his dominant victory Thursday. That means Izzo’s moves could be the deciding factor.

Michigan basketball and Michigan State will meet for the second time in four days on Sunday afternoon at the Breslin Center in East Lansing.

This time, the stakes are much lower — for one of them, at least.

The second-ranked Wolverines clinched an outright Big Ten title with Thursday’s 69-50 win and seem to be comfortably locked into the No. 1 seed line.

The Michigan State, meanwhile, are playing to keep their NCAA tournament hopes alive. MSU has made the tournament 22 consecutive seasons under coach Tom Izzo but find themselves on the bubble in the final week of the regular season. A win over their rival would go a long ways toward securing a bid ahead of the Big Ten tournament this week.

Here are three keys for Michigan to avoid an upset by Michigan State on Sunday:

[ Michigan already looking to what could be a special March: ‘Go get that natty’ ]

No foul trouble for Dickinson

Hunter Dickinson played just nine minutes in the first half Thursday due to foul trouble. If he hadn’t had to sit, the Wolverines might have led by more than 11 at halftime. Dickinson scored seven quick points (on two post-ups and a roll to the rim) when he returned, dominating MSU’s Thomas Kithier. That swung the game firmly in Michigan’s favor. Even though Dickinson had six turnovers, several of those were correctable and unusual for Dickinson. Even with the foul and turnover issues, he scored 14 points (on 6-for-8 shooting) with 10 rebounds. As good as he is offensively, Dickinson, who was named a Wooden Award finalist on Saturday, has also evolved into an elite two-way player; look at what he did to Iowa’s Luka Garza and Indiana’s Trayce Jackson-Davis. Because of that, he is arguably the most indispensable player on this team.

On Thursday, Michigan State chose to go under most, if not all, of Michigan’s ball screens; the Spartans’ strategy was clearly to pack the paint and force the Wolverines to shoot from outside. That strategy didn’t exactly work: Eli Brooks hit an early 3 when a defender went under a screen, setting the tone for a 7-for-16 3-point performance from the Wolverines. Likewise, Mike Smith hit a 3 when a defender went under a screen and Franz Wagner (4-for-6 from 3) did the same multiple times. Michigan shoots 39% from beyond the arc, No. 12 in the nation. That ranking isn’t inflated by a couple outliers, either — the Wolverines have been a top shooting team all season long. If Michigan State again elects to go under ball screens, Michigan’s shooters could do more damage.

Wagner won the highly-anticipated matchup against Aaron Henry on Thursday, with a game-high 19 points on 6-for-12 shooting. As the primary defender on Henry, he held the budding MSU star to 14 points on 6-for-15 shooting with four turnovers, and only four of those points came in the second half. Henry has led Michigan State’s late-season resurgence on offense with his ability to get to the rim and shoot over smaller defenders. Wagner, an elite two-way player, has the length and defensive ability to challenge Henry. And the Wolverines also seem comfortable giving up 3-point attempts line to Henry, who has made just 27.8% of his 3s this season.