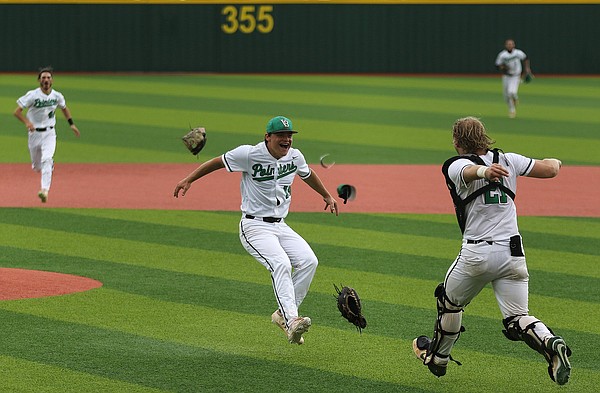 Pitcher Connor Johnson, who helped Van Buren to a Class 5A state title, will join the Sportsman this summer.

Johnson, a Central Arkansas signee, went 13-0 on the mound for the Pointers and should help anchor the pitching staff.

Prieur, who begins his 10th year as the head coach of the AAA Sportsman, said bringing a state title back to Fort Smith was an incredible feeling.

“We’re pretty dang proud of that,” Prieur said. “To finally get that done was pretty special.”

He also noted that Fort Smith Forsgren, the AA team, also finished as state runner-up a year ago. A good number of those players will play key roles for Prieur’s AAA team this year, too.

The AAA returners include Dakota Peters of Van Buren, who completed his freshman year at Connors State, along with catcher Tanner Callahan, Johnson’s battery mate at Van Buren, and Logan Bolin of Sallisaw, Okla. and Kent Carlisle, who played high school ball at Fort Smith Southside.

Reed Carroll of Greenwood should also contribute significantly in the middle infield and on the mound, Prieur said. Austin Place, a Arkansas-Fort Smith signee from Red Oak, Okla., should also help on the infield.

“I like our team,” Prieur said. “Dakota played some outfield in college. He was a corner infielder for us and caught some. We moved all over, he hit so well.

“We feel like our defense can really carry us. Having two catchers really helps out there. The pitching and the hitting will come around in due time.”

The Sportsman didn’t have a junior team a year ago with the pandemic making the season uncertain. But they have added one back this year and have three teams again. Shea Hamilton, who coached the AA team a year ago, will now guide the younger group.

Prieur said there were more than 80 players at tryouts, which allowed them to keep 16-18 players for each roster.

“We’re excited to have three teams again,” Prieur said. “Giving kids an opportunity to play always what we want to do. It’s gonna be a great summer seeing all these kids come together from so many different places.”

The AAA Sportsman open the season tonight hosting the Katzer Tournament over the weekend. The finals are slated for Sunday afternoon at 4 at Hunts Park. The field includes AAA state runner-up Russellville, not to mention perennial power Bryant along with some stiff out-of-state competition.