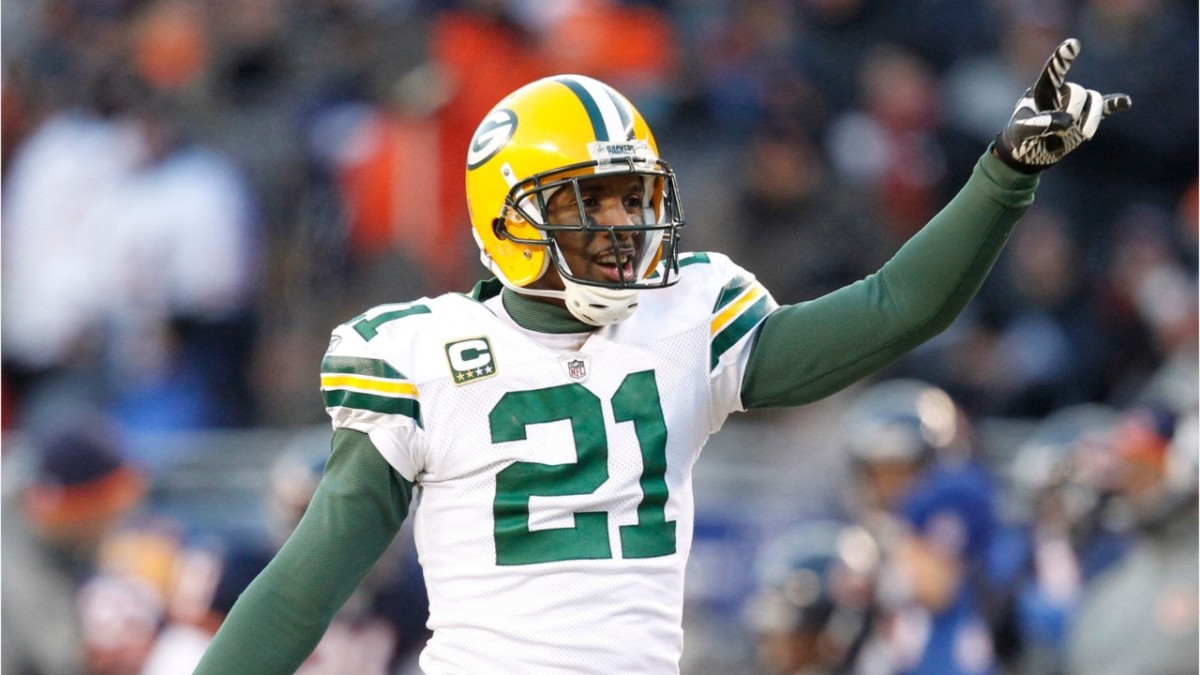 Woodson, whose career experienced a rebirth with the Green Bay Packers, will join Peyton Manning as headliners in the Hall of Fame’s Class of 2021 that was announced on Saturday at NFL Honors. Woodson and Co. will be enshrined in Canton, Ohio, on Aug. 7.

Woodson was the fourth pick of the 1998 draft by the Oakland Raiders after winning the Heisman Trophy at Michigan. He spent eight seasons in Oakland before signing a free-agent contract with the Packers in 2006. A player known at the time as much for his negative attitude as his talent, Woodson turned in seven dominant seasons for the Packers to cement his status as a Pro Football Hall of Famer.

“The decision was really made for me, to be honest,” Woodson said in 2019 upon being announced with former teammate Al Harris as members of the Packers Hall of Fame’s 50th class. “There wasn’t a whole lot of suitors out there for me as a free agent. The Green Bay Packers came with a package, and to quote the movie, they showed me the money. They really wanted me there and showed that they wanted me there.”

Woodson might not have become a Packers legend, and the Packers might not have won Super Bowl XLV, if not for then-Packers scout Alonzo Highsmith, whom Woodson jokingly called a spy.

“He used to work out at the same facility in Houston where I worked out, so I would see him every day,” Highsmith said on Saturday. “I mentioned his name to the Packers. I was like, ‘Hey, we need to sign Charles Woodson.’ And everybody was like, ‘Uhhh.’ There was something about him at that time. I said, ‘This is a nice guy. I talk to him every day. I see him every day. He works his ass off. He doesn’t say a word; he just works.’ Ted (Thompson) and Reggie McKenzie were like, ‘I don’t know.’ Finally, we got the ball rolling. At the time, Charles didn’t know me and I didn’t know him. I don’t even think he knew I was telling Green Bay about him. So, when he eventually signed in Green Bay, he thought, ‘They must have sent this guy down here to watch me.’”

The Packers signed Woodson but that didn’t mean Woodson was happy about it. He didn’t want to play for Green Bay but nobody else wanted a player with a bad attitude and a broken leg. He infamously butted heads with then-coach Mike McCarthy. He was fined for “everything” at one point or another, he said.

“It was kind of rough at the beginning, because I really didn’t quite want to be there, and I just couldn’t wrap my mind around the fact that I didn’t have anybody who wanted me on their team,” Woodson said. “I was really sour about that, so it kind of dictated the way I interacted with a lot of people around there, really standoffish, got into some verbal arguments and things like that. When I look back on it, I kind of feel like it was my way of trying to get out of the situation. But I’m really glad I didn’t get out of it because it turned out the way it turned out. I finally got comfortable being there, and once I started playing and started making plays, everything kind of took care of itself from there.”

By 2007, McCarthy and Woodson had found common ground. With Woodson becoming one of the dominant players in the NFL, the Packers became perennial contenders.

“I think amazed would be a little disrespectful to him,” quarterback Aaron Rodgers said in 2009 after Woodson notched career interception No. 40. “I’m not surprised, I’m impressed. I’m not surprised because of the way he takes care of his body. He’s a guy I know personally was in here in January and February working out when nobody else was here. The way he takes care of his body in the weight room, the way he practices. His film study is really underrated and maybe not talked about enough. He watches so much film, understands the game. Him and Al (Harris) are so instinctual, so intelligent on the field, they can often tell routes by the way guys line up.”

Woodson passed his knowledge to his teammates, including safety Nick Collins, who was drafted in the second round the year before Woodson was signed. Growing up, Collins dreamed of being the next Woodson as a defensive player who won the Heisman. Paired with Woodson in Green Bay, Collins became one of the best safeties in the NFL.

“He took me under his wing and he broke everything down: how to play the game, how to understand the game, how to make reads,” Collins said recently. “I remember sitting in the office with him one day. He was like, ‘With your skill level and your talent, there’s no way you shouldn’t average four to five picks every season.’ That went to heart. The more we hung out together, our friendship kept growing and growing. …

“He’s a tremendous guy, friend, teammate – all the above. He’s like an older brother to me. When he left the game, everybody knew who Charles Woodson was with how he played the game and how he carried himself. He was all about business.”

Woodson’s business was making plays. He intercepted 38 passes and broke up 115 with the Packers and was the heartbeat of the 2010 team that won the Super Bowl. He was selected to four consecutive Pro Bowls from 2008 through 2011 – including winning NFL Defensive Player of the Year honors in 2009 – and led the league in interceptions in 2009 and 2011. He set franchise records for the most touchdowns on interceptions (nine) and the most defensive touchdowns (10).

Woodson tied for the NFL lead with seven interceptions in 2011 when he was 35 years old.

“There’s one of him walking around. There’s one Julius Peppers, there’s one Calvin Johnson and there’s one Charles Woodson,” then-defensive backs coach Joe Whitt said. “If he has lost a step from his rookie year to now, then he’s made up two steps because of his intellect and his knowledge of the game. He plays so fast because he knows what’s going on. He still has good football in front of him. He’s going to play at a high level until he decides not to play anymore.”

“His football IQ. He had an in-depth view of the game,” Highsmith said. “All he did was take the ball away from people. He had great hands, great vision, great eyes, great awareness, special instincts that only a few people ever get. We talk about the interceptions but he had a unique talent of being able to tackle and rip the ball out at the same time. He was amazing.”

He also became a revered leader. Woodson was a driving force behind the team’s run to the championship in 2010. After the Packers won at Chicago in the NFC Championship Game, he sent then-President Obama, a noted Bears fan, a Packers jersey with a note reading, “See you at the White House. Go Packers.” His message to the team of playing with one mind, one goal, one purpose and one heart is inscribed on the Super Bowl ring.

Woodson suffered a broken collarbone in the Super Bowl XLV victory over Pittsburgh but relished the confetti shower after the game.

“Man, it was like, finally,” he recalled in 2019. “I had gone to one Super Bowl, of course we lost that one, and I think when you go to a Super Bowl, you automatically expect the next year you’ll be in the hunt again, and that wasn’t the case. The next in Oakland I think we were 4-12 and never had a winning season after that. So, it was a long road to get back there, to get back to that point, and when you see me in that sling throwing confetti on myself and on my son and on my family, that was the moment for me, because finally I had gotten a Super Bowl championship.

“Literally, I used to have this reoccurring dream that I would be going to a party and I’d get to the door and the bouncer at the door would ask me, hey, show me the ring, and I didn’t have the ring, so I couldn’t get in the party. It’s funny because I never had that dream again once I won the Super Bowl, so that’s what that moment was all about.”

And now, another moment of glory. With his selection to the Hall of Fame, Woodson has accomplished just about everything imaginable for a football player.

He won the Heisman Trophy in 1997, the last defensive player to win college football’s top award.

He won NFL Defensive Player of the Year.

His name stands among the pantheon of great players in NFL history. Before Saturday, there had been only 84 first-ballot Hall of Famers.

History matters to Woodson, who is the 27th member of the Packers to be selected. With the coveted gold jacket and bronze bust coming his way, he’s been bestowed football immortality.

“Yeah, I think of it now, more than I ever have, because how much longer will I play?” Woodson said before the 2011 playoffs. “This sport, once you get over a certain age, they think about trying to get you out the door. You never know when that time’s going to come. When you get to that level to where you’re mentioned with people — there’s been thousands of players who have played in the NFL, and to be mentioned with the tops throughout the history of the game, I go to bed sometimes thinking about it.”

Coronavirus: new exercise restrictions in England ‘under active consideration’ | Sport
We use cookies on our website to give you the most relevant experience by remembering your preferences and repeat visits. By clicking “Accept”, you consent to the use of ALL the cookies.
Cookie settingsACCEPT
Manage consent