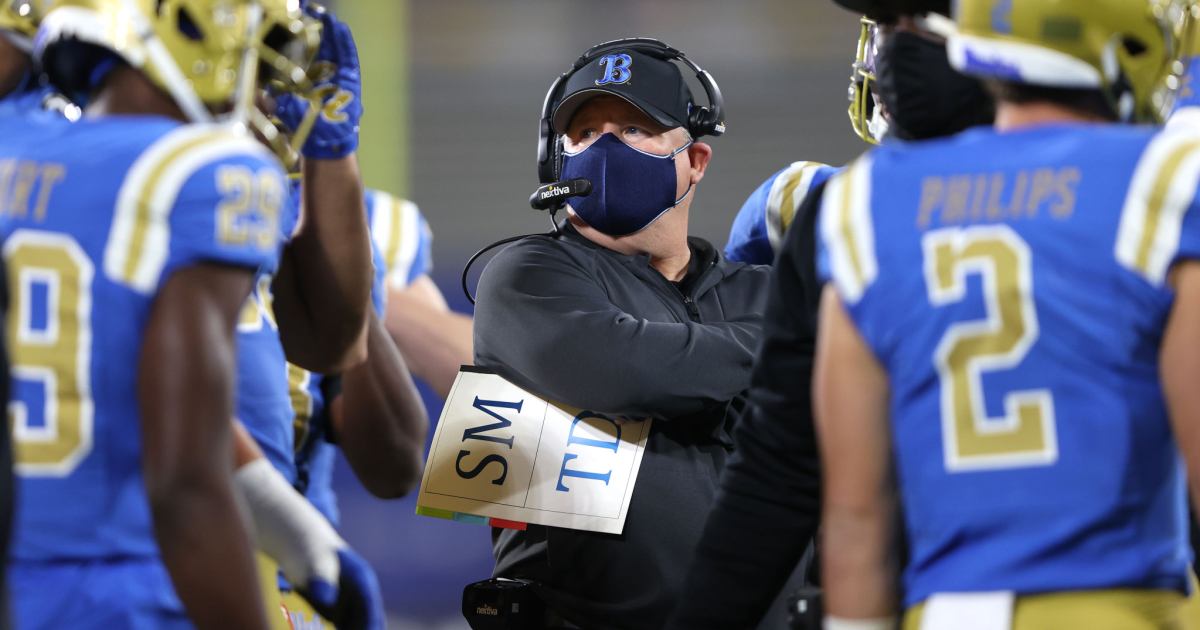 While many college football programs are closing up shop after spring games, UCLA is just getting started.

Two inexplicable losses to end 2020 dampened excitement about Chip Kelly’s program that appeared to be building. But with almost all starters returning, hope springs again in Westwood. Here’s what to watch for during UCLA’s spring practices that start Friday:

Is Year 4 the year for Chip Kelly?

Kelly was expected to awaken a sleeping giant, but so far the Bruins have barely stirred from hibernation. UCLA inched above .500 only once amid three losing seasons and Kelly is 10-21 in Westwood.

“Elite teams make a turn where they go from hoping things are going to go well to knowing they’re going to go well,” Roth said. “That no-flinch mentality that I do think is developed in an offseason, that’s what I want to see.”

Dorian Thompson-Robinson has symbolized the potential of the Kelly era on the field since he was a freshman anointed as the program’s savior.

Now he’s a senior with only marginal success. After just one year of starting quarterback snaps in high school, the past three seasons have helped him catch up to his peers in terms of practice at the position. He’s had the repetitions. He needs the results.

“I want to see absolute mastery,” said Roth, who emphasized the importance of situational football, accuracy and ball security. “All of those things, he’s proven he can do and he’s also proven that he’s found his struggles there over-trying at his position. … He needs to be one of the best quarterbacks in the country this year.”

Thompson-Robinson is coming off the most efficient season of his career after completing 65.2% of his passes for 224 yards per game with 12 total touchdowns. But turnovers have been the biggest headache, with 20 interceptions and 10 fumbles lost in 24 career games.

What’s next for this defense?

When Kelly arrived, many defensive players touted the unit’s new motto of “flying around” to make plays. The Bruins finally took off last year.

UCLA led the Pac-12 in rushing yards per carry allowed (3.6 yards), sacks per game (3.3) and interceptions (nine). The 3.29 sacks per game ranked eighth in the nation, led by 5.5 sacks from linebacker Caleb Johnson. But heartbreaking losses to USC and Stanford in which the defense relinquished fourth-quarter leads left a stain on an otherwise encouraging year.

Defensive backs Obi Eboh, Qwuantrezz Knight and Quentin Lake returned with an additional year of eligibility, giving the Bruins experience in the secondary that will need to improve from the 274.1 passing yards allowed that ranked 11th in the Pac-12 last year.

Who’s the next running back?

With Josh Kelley and Demetric Felton, UCLA will send starting running backs to the NFL draft in back-to-back years. The running back carousel now spins toward grad transfer Brittain Brown.

Brown is in line for the starting position after rushing for 551 yards in seven games and four touchdowns last season. His 6.62 yards per carry ranked 15th in the country.

The Bruins may also look for redshirt junior Kazmeir Allen to finally break out. Since wowing fans with his breakaway speed in his UCLA debut with a 74-yard touchdown run against Cincinnati in 2018, Allen hasn’t had a play from scrimmage longer than 24 yards.

Which new faces will contribute immediately?

Kelly’s most fruitful recruiting territory during his UCLA tenure has been the transfer portal and he went shopping again in 2021.

N-G top 10: Volleyball (April 24, 2021) | Sports
We use cookies on our website to give you the most relevant experience by remembering your preferences and repeat visits. By clicking “Accept”, you consent to the use of ALL the cookies.
Cookie settingsACCEPT
Manage consent