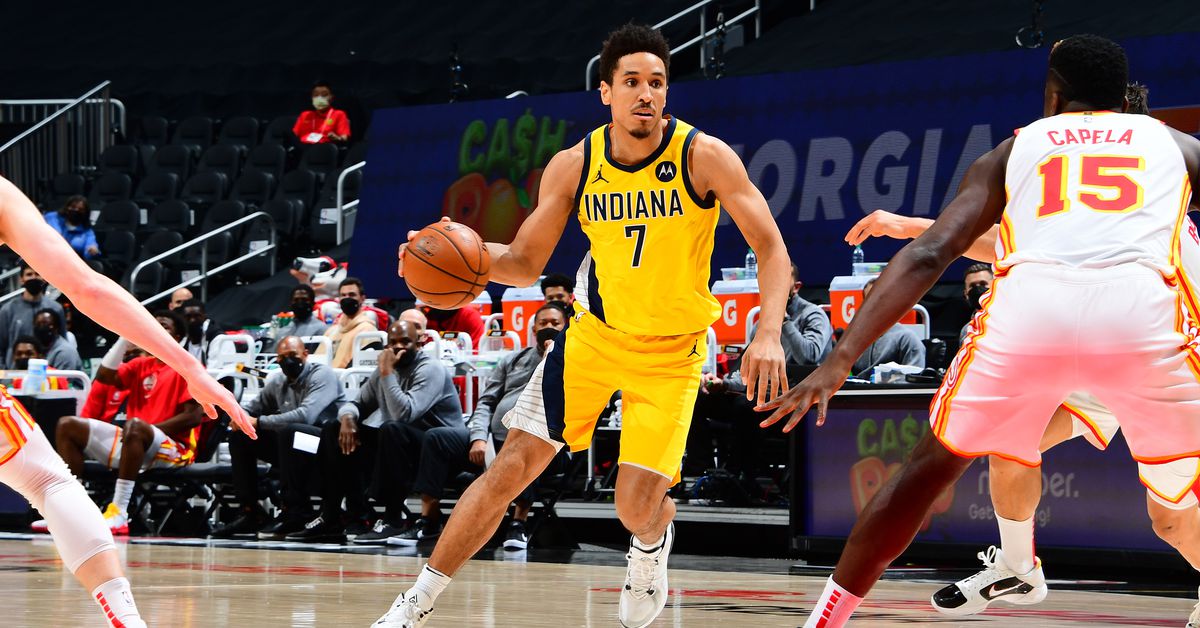 On tap for Saturday night is a six-game NBA slate, and DraftKings continues to offer huge tournaments for DFS players. Below are some of my favorite targets at each position.

Refer a friend and get $20 DK Dollars! Head to the DraftKings Playbook Promo page for more details!

Wednesday night, the Pacers were without both Myles Turner (toe) and Domantas Sabonis (back), and Brogdon responded with 61.75 DKFP in a win over the Thunder. Both of these bigs will continue to be sidelined Saturday night vs. the Pistons, keeping Brogdon in a huge role. Whenever he has been on the floor sans Sabonis and Turner this season, Brogdon’s usage has seen an increase of 5.4 percentage points.

Detroit has been a great matchup for point guards all season long, giving up the sixth-most DKFP per game to the position, and Brogdon should supply a minimum of 40 DKFP with a ceiling similar to his output Wednesday night.

John Wall will be rested tonight with this being the second leg of a back-to-back, and Kevin Porter Jr. (health protocols), D.J. Augustin (ankle), Eric Gordon (groin) and Sterling Brown (knee) will all be inactive. This leaves Brooks as the only true point guard remaining for Houston, and by default, he should start and play big minutes.

Brooks signed a two-way deal with the Rockets eight games ago and has produced a solid 0.8 DKFP per minute when he has been on the court without Porter Jr. and Wall. Given Houston’s lack of ball handlers, it’s hard to imagine Brooks will log anything less than 30 minutes, making him a tough value play to ignore at only $3,800.

With Sabonis and Turner missing Wednesday, LeVert exploded for 52.75 DKFP across 40.4 minutes vs. the Thunder. Doug McDermott ($3,800; ankle) and Jeremy Lamb ($4,300; knee) also sat out that win, and both are questionable for Saturday. Nonetheless, LeVert should a main offensive weapon for Indiana tonight, even if these two role players are available.

LeVert has received at least a 29% usage rate in five of his past six games and should handle 35-to-40 minutes vs. the Pistons, with the Pacers opting for more small-ball lineups sans Turner and Sabonis. Just last month, LeVert recorded 47 DKFP against this Detroit club, even with the Pacers at full strength, and his ceiling is well over 50 DKFP this time around.

With Jamal Murray (knee) and Monte Morris (hamstring) sidelined, Dozier’s role has seen a huge upgrade, logging 28.7 minutes per game across his past five, resulting in 24.2 DKFP per game. Now, not only will those two guards remain out Saturday, but Will Barton ($5,800) is very unlikely to suit up after injuring his hamstring last night at Golden State.

Dozier was the player that replaced Barton for the second half Friday, and he should gain a start and garner over 30 minutes for tonight’s friendly matchup with the Rockets. So far this month, the Rockets’ defense has been the fourth-weakest group in the NBA, and Dozier should effortlessly return five- to six-times value in this spot.

Other Options: Jalen Brunson ($4,900, if Kristaps Porzingis is out)

In a 115-110 win Thursday night, Doncic tallied 58.25 DKFP against the Lakers. The superstar is now collecting 60 DKFP per game over his past five and gets a rematch with Los Angeles on Saturday, but this time, Dallas may be without Kristaps Porzingis ($9,000; questionable, ankle).

Porzingis sprained his ankle Thursday night after playing 29 minutes and did not return to help close out the win. Considering how cautious the Mavs have been with the fragile forward this year, it seems unlikely Porzingis will suit up tonight, adding extra usage to Doncic’s already colossal role. Since the start of the month, the Slovenian has seen his usage increase 2.3 percentage points with Porzingis off the court, and Doncic is one of the better studs to build around for this six-game slate, regardless of this matchup rating poorly (Los Angeles is first in defensive efficiency).

As the interim starter for Donovan Mitchell (out, ankle), Ingles hasn’t disappointed, generating 43.1 DKFP per game in these first three since the All-Star went down. Compared to his 27.1 minutes per game average this season, Ingles has handled 31.7 minutes per game with Mitchell injured, and his usage and assist rates have elevated to 20.5% and 33.3%, respectively.

Overall, Ingles contributes 0.94 DKFP per minute sans Mitchell this season, and it doesn’t get much better than this matchup vs. the Wolves. Over their past 10 games, Minnesota ranks dead last in defensive rating, and Ingles has 40-DKFP potential in this beautiful matchup.

The Pelicans destroyed the Magic by 35 points on Thursday night, and Williamson was only needed for 23 minutes. Tonight should be a completely different story, with New Orleans only two-point favorites vs. the Spurs on DraftKings Sportsbook. Since the beginning of March, Williamson has competed in 10 contests that have carried a spread under five points and is amassing 48.25 DKFP per game in those tight projected tilts.

Williamson certainly is a threat for over 50 DKFP tonight — particularly at home in the Smoothie King Center, where the budding star is scoring 2.8 more DKFP per game this season — and is the undisputed top overall play at his position.

With Turner, Sabonis, Lamb, Goga Bitadze ($4,100; questionable, ankle) and Jakarr Sampson (suspension) all out Wednesday, Brissett put on a show, erupting for 51.5 DKFP in 42 minutes vs. the Thunder. Now, it’s a wait-and-see approach with the second-year big man for Saturday night. If Bitadze isn’t ready to make his return and joins Sabonis and Turner on the sidelines, Brissett should start and play huge minutes, obviously putting him in must-play territory.

Even if Bitadze is active, I still believe that Brissett earned himself a sizable role after his career night Wednesday, and 25-to-30 DKFP would be a fair projection against the Pistons. Without question, this would absolutely still be enough volume for the 22-year-old to beat his low price tag. He is generating 1.1 DKFP per minute and this is a plus spot for Brissett, with Detroit ranked 25th in defensive rating over their past 10.

Gobert has seen a small increase of 1.6 percentage points to his usage without Mitchell on the floor this season, but going against the Wolves is the main selling point for the center on Saturday. No defense has yielded more DKFP to opposing centers than Minnesota this season, and Gobert posted 42.5 DKFP against them earlier this season.

Plus, DraftKings Sportsbook is listing this contest with a large 234.5 point O/U game total. In the 11 games with totals of at least 230 points that Gobert has been active for in 2020-21, the two-time defensive player of the year is supplying 42.6 DKFP per game.

Christian Wood ($8,200) tweaked his ankle last night against the Clippers, and the injury is expected to keep him out of Saturday’s date with the Nuggets. This should push Olynyk over to center in the Rockets’ starting lineup, and his role should be immense, with Wall and Porter Jr. also out.

Since joining the Rockets at the trade deadline, Olynyk’s usage rate has been an outstanding 28.9% with Wall, Porter Jr. and Wood off the court. This is a huge increase of 8.8 percentage points above Olynyk’s usual usage, and the former Heat forward has amassed 38.9 DKFP per game in the pair of contests he has started in place of Wood. Visiting the Nuggets tonight, the blowout risk is very real for Houston, but that should scare some DFS players away from Olynyk, creating an excellent opportunity to attack him in GPPs.

Put your knowledge to the test. Sign up for DraftKings and experience the game inside the game.

I am a promoter at DraftKings and am also an avid fan and user (my username is Hunta512) and may sometimes play on my personal account in the games that I offer advice on. Although I have expressed my personal view on the games and strategies above, they do not necessarily reflect the view(s) of DraftKings and I may also deploy different players and strategies than what I recommend above. I am not an employee of DraftKings and do not have access to any non-public information.

Kentucky Football Picks Up Another Commitment