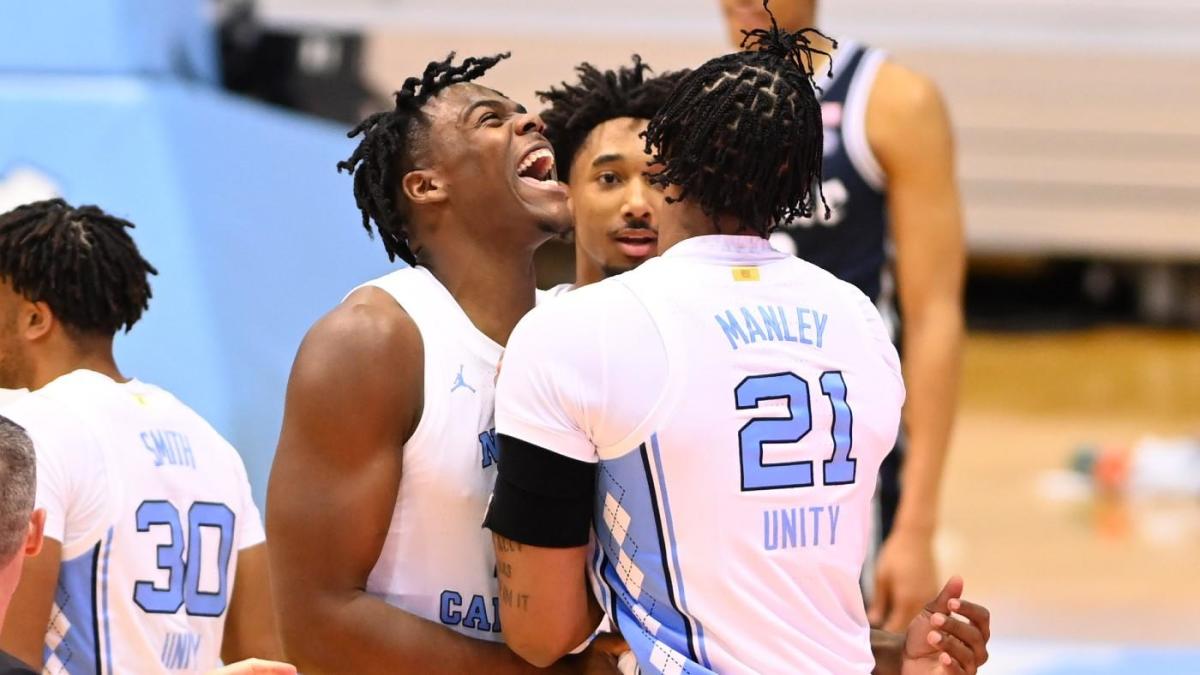 North Carolina closed the regular season with a statement victory on Saturday as the Tar Heels thrashed Duke 91-73 to complete a sweep of their archrival in a critical moment for both teams. In a storied series that frequently produces thrillers, this game was an outlier as UNC opened up a 20-point lead midway through the first half and never let Duke get within single digits for the rest of the game.

The win should help solidify UNC’s at-large candidacy for the NCAA Tournament after the Tar Heels (16-9, 10-6 ACC) entered the day as a projected No. 11 seed in Jerry Palm’s Bracketology. For Duke (11-11, 9-9), the loss is a crushing blow to its hopes of making the Big Dance. The Blue Devils entered as a bubble team on the outside of the projected field, according to Palm, and will likely need a solid run in next week’s ACC Tournament to avoid missing the NCAA Tournament for the first time since 1995.

UNC used a predictable formula to open up its early lead as the Tar Heels pounded the ball inside while opening up an 11-2 lead against Duke’s lean front line. In the end, UNC got some timely 3-pointers and hit 21-of-26 free throws. Armando Bacot, Kerwin Walton and Caleb Love each scored 18 to lead the Tar Heels.

Duke’s Matthew Hurt, the ACC’s leading scorer, did not get on the board until the 1:20 mark of the first half. He ultimately finished with 14 points, but by the time he got going, the Blue Devils were out of it. A silver lining from the otherwise dreary affair for the Blue Devils was another solid outing from freshman center Mark Williams, who led Duke with 18 points on 7-of-10 shooting.

UNC’s win secured it the No. 6 seed in the ACC Tournament, meaning that it will play the winner of Tuesday’s first round game between No. 11 Notre Dame and No. 14 Wake Forest. The Tar Heels would advance to play No. 3 Virginia Tech in the quarterfinals on Thursday if they win their first game.

The loss is especially bad news for Duke’s placement in the bracket, as it dropped the Blue Devils to the No. 10 seed, which will force them to play in Tuesday’s first round against No. 15 seed Boston College. Duke will have to win five games in five days to win the ACC Tournament. With a win over UNC, Duke would have secured the No. 9 seed and played its first game against No. 8 seed Syracuse in Wednesday’s second round instead.

UNC’s guards rise to the occasion

Attention is lavished on UNC’s frontcourt, and for good reason. Most teams would love to have just one post player with the size and skill of the four whom the Tar Heels are spoiled with. But it was guard play that helped North Carolina extend its early lead and maintain the advantage, and it is guard play that will likely decide how far this team goes.

With his 18-point, seven-assist outing, Love again turned in a gem against the Blue Devils after scoring a season-high 25 in an earlier 91-87 win over Duke. Walton’s 18-point outburst 4-of-7 shooting from 3-point range was his second-highest scoring output of the season. Between Love, Walton and RJ Davis, the Tar Heels have three freshmen guards who have shown flashes of potential greatness this season. If at least two of them play well — like they did Saturday — it makes this team dangerous.

After five-star forward Jalen Johnson left the Duke program after playing just eight minutes in a win over NC State on Feb. 13, it seemed the Blue Devils might actually be better off without him. That narrative, which was pushed into the spotlight by Syracuse coach Jim Boeheim, appeared accurate as Duke won its first three games without him. But after losing three straight to end the regular season, the topic might be worth revisiting.

Clearly, Johnson never gelled with this team but it’s clear the Blue Devils are lacking depth, and it can take time for teams loaded with talented freshmen to find a rhythm. Williams is a great example, as the former five-star prospect is averaging 16 points over Duke’s last four games following a quiet start. It’s worth wondering if both sides might have been better off trying to find a resolution. Johnson wouldn’t be dealing with questions about his level of commitment ahead of the NBA Draft — or whatever is next for him — and a struggling Duke team would still have another talented piece to use as needed.

Washington Football Team lands their franchise QB
We use cookies on our website to give you the most relevant experience by remembering your preferences and repeat visits. By clicking “Accept”, you consent to the use of ALL the cookies.
Cookie settingsACCEPT
Manage consent