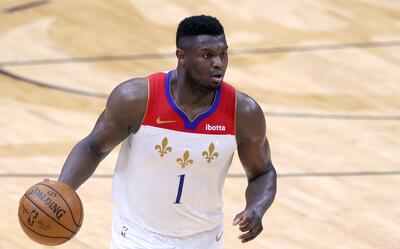 With 11 games to choose from on Monday’s slate — which locks at 7:00 p.m. EST — let’s look at the top options across all five positions for NBA DFS.

Be sure to check out our projections, which are updated throughout the day as news breaks, and our other DFS tools such as advanced stats and a matchup heat map.

Here are some of the top plays on today’s DraftKings slate. As always, good luck.

John Wall ($8,300) – With Victor Oladipo now elsewhere, Wall will be the center of attention in the Houston offense. When Oladipo has been out of the lineup this year the veteran point guard has turned a 30.1% usage rate into 1.13 DraftKings points per minute, according to NBA Wowy. In the last 10 games alone, he has upped that to 1.28 DK points per minute sans Oladipo, leading him to 40-point fantasy outings in 7 of the 10. Wall should continue to roll against the visiting Memphis Grizzlies.

Nickeil Alexander-Walker ($5,800) – Rostering Alexander-Walker is 100% contingent on the status of fellow guard Lonzo Ball, who is questionable. Ball has been sidelined since suffering and re-aggravating a hip injury, which has allowed the sophomore to take on a larger role — a role that’s consisted of four consecutive starts. In that four-game stretch, he’s averaged 33.5 DK points across 34 minutes a night. He’s impressed, even against tough competition like the Nuggets and Lakers. The 22nd-ranked Boston defense should allow him another productive evening in a heightened role.

Kevin Porter Jr. ($6,400) – It also looks like Porter will be one of the prime beneficiaries of the Oladipo move. In the second-year player’s first game back from a quad injury, he was able to log 31 minutes in a start at shooting guard, contributing 25 points and 33 DK points in the process. To this point, Porter has averaged a 26.9% usage rate as well as 1.06 DK points per minute with the Rockets. The workload should be enough at this salary, even against a top-10 defense in the Grizz.

Derrick White ($5,900) – Shooting guard is a great spot for a mid-tier salary option like Porter or White. Unlike Porter, White’s appeal is from his matchup more than his role. While he has seen more consistent minutes in the 30s, the Spurs draw the fantasy-friendly matchup that is the Sacramento Kings, who rank dead last in defensive rating and ninth in pace — seven spots ahead of the Spurs. He should feed off of his team’s 115.25 implied total and 228 over/under, via FanDuel Sportsbook.

Kawhi Leonard ($8,900) – For the second of two primetime matchups, the Los Angeles Clippers will play host to the Milwaukee Bucks at Staples Center, where the Clips are labeled as one-point favorites on their home court. The over/under is not yet listed, but expect it to be higher given Milwaukee’s top-three pace. That means more chances at fantasy numbers for a guy like Leonard, who has been on fire of late, scoring 25-plus and posting 45 or more DK points in three straight. Leonard’s bringing that hot streak into a matchup with Giannis Antetokounmpo and company, against whom he tallied 45.8 DK points in their only other meeting this season.

RJ Barrett ($7,200) – If you’ve been following along, you’ll know that Barrett has been a mainstay in this article over the past few weeks. After some tough times in the middle of the season, the New York Knicks‘ swingman has bounced back to shoot 47.5% for the month of March. He’s scored 21.1 points and added 6.3 rebounds in his 36.4 minutes per game in that timeframe. The Miami Heat check in eighth in defensive efficiency, meaning Barrett is more of a tournament play tonight at this salary.

Zion Williamson ($8,800) – Zion is mashing the competition night-in and night-out. Since the All-Star break, he’s sixth in the league at 29.1 points per game, coming on a ridiculous 68.1% shooting from the floor. He’s added 6.4 boards and 3.9 assists, totaling 44.4 DK points per game. In his last two games alone Williamson has managed 65.5 and 51.25 DK points, respectively, doing so on a massive 35.2% usage rate. Feel confident to build around him against a very mediocre Boston defense.

OG Anunoby ($6,300) – No more Norman Powell in Toronto means more of everyone else. That’s impacted Pascal Siakam in the very short-term, but Anunoby’s numbers are creeping up, too. In a pair of contests, he’s logged 38 minutes apiece for 17 points and 35.1 DK points per game. On Monday, him and his Raptors are favored by four on the road against Detroit. According to FantasyPros, the Pistons rate fourth-worst at defending opposing power forwards, having allowed 48.4 DK points per game on the season.

Nerlens Noel ($4,800) – In unfortunate news, Mitchell Robinson left Saturday’s game due to a broken right foot that might hold him out for the rest of the season. In his stead, both Taj Gibson and Noel saw elevated time, but Gibson played more of a role at the four than the five. The latter is set to benefit to a greater extent, and while his salary takes time to catch up, Noel should return good value. In a starter’s role, he’s averaged just 6.5 points, but his peripherals (7.0 rebounds and 3.1 steals-plus-blocks) have made up for his lack of scoring production.

Kelly Olynyk ($4,400) – On Saturday, Christian Wood was scratched from the Rockets’ lineup and is now considered questionable heading into Monday night. The recently-acquired Olynyk stepped in to log 25 minutes in a start and converted to the tune of 16 points and 34.5 DK points. His salary has jumped $900 because of that, but if he’s able to get another start he’s going to meet value versus Memphis. Lock him in across all formats.

Brett Oswalt is not a FanDuel employee. In addition to providing DFS gameplay advice, Brett Oswalt also participates in DFS contests on FanDuel using his personal account, username BRO14THEKID. While the strategies and player selections recommended in his articles are his/her personal views, he may deploy different strategies and player selections when entering contests with his personal account. The views expressed in his articles are the authors alone and do not necessarily reflect the views of FanDuel.