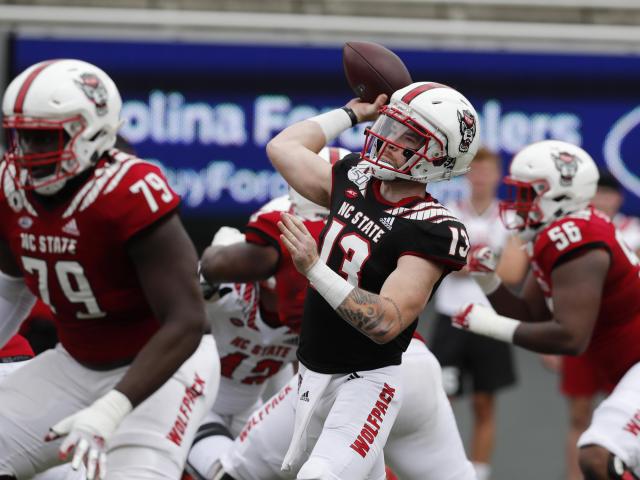 Continuity (and health) a plus for NC State football :: WRALSportsFan.com

The classic conundrum of a spring game for a coach is he can be left to wonder if the offense was really that good or if the defense was bad.

NC State coach Dave Doeren has always set up the Wolfpack’s spring game in a way that leaves both his starting offense and first-team defense feeling good.

He doesn’t put them on the field together.

So quarterback Devin Leary’s return from a broken leg can be celebrated, for the pair of touchdowns he threw in a half’s worth of work, and taken as a sign of encouragement.

There were plenty of other positives, including, you know, just the ability to have a spring game, after last year’s was scotched because of COVID-19.

The 37-17 win by the Red team, or the starters, over the White, the backups, also gives Doeren something to hang his hat on as his players get ready to hit summer workouts.

The only real objective of a spring game is to keep everyone healthy. NC State has 20 starters primed to return after an 8-4 finish in 2019. A handful of them, from linebacker Payton Wilson to running backs Ricky Person and Bam Knight, sat out Saturday’s action as a precaution.

Leary’s return was notable. He broke the fibula in his left leg on Oct. 17 in a win over Duke on the same field. Leary connected with receiver Porter Rooks for a 58-yard touchdown on the Red’s second possession of the scrimmage.

Leary had another TD pass, a 9-yarder to Thayer Thomas, in the second quarter. He finished 12 of 23 for 175 yards with two scores and an interception.

“The thing I like about how Devin is playing is he’s just comfortable right now,” Doeren said. “He knows the system.”

That wasn’t really possible last year with a new play-caller in Tim Beck and spring practice shut down after five days because of the pandemic.

In a show for the estimated 10,000 fans at Carter-Finley Stadium, and the viewing audience on the ACC Network, Beck dialed up a trick play for Thomas to throw a 28-yard TD pass to receiver Devin Carter.

While Leary looked good in his return, there was a brief injury scare for backup quarterback Ben Finley. On the second play for the White, safety Tanner Ingle pushed a blocker into the right knee of Finley.

“You hate for anyone to get rolled up,” Doeren said. “I was right behind the play and I didn’t think it was anything major.”

The second-year freshman was able to brush off the unexpected contact and continue in the scrimmage. He ran for a 4-yard score in the second quarter for the White.

With Person and Knight watching from the sidelines, running back Jordan Houston had the showcase to himself, at least until he was sent to the sideline with what looked like a potential foot injury in the second quarter.

Houston ran for 89 yards and a touchdown on 10 carries. He had an x-ray but Doeren said it was a minor sprain.

The only other objective for Doeren was to start the process of cutting down on penalties. It wasn’t a real game, most of the regular starters played about a half, but there were officials here.

There was only one flag thrown.

“We were trying to play as clean as we could,” Doeren said.

After averaging 8 penalties a game, and ranking No. 117 in the FBS with 74.3 yards per game, Doeren welcomes the progress.

The rest will have to be made between now and before the real games begin on Sept. 2 against South Florida.

There will be plenty of familiarity with this group. Basically only tight end Cary Angeline and nose tackle Alim McNeill have to be replaced from last year’s team.

NC State will have to get reacquainted with the Atlantic Division, Clemson returns to the schedule after a year off, and it will have to figure out how to get back to “normal.”

NC State excelled in the chaos of the pandemic. It has to find a way to keep that same edge without as many obstacles.

Given how many important parts remain the same, on the field and with the coaching staff, Doeren has every reason to believe that Saturday’s spring game wasn’t a dose of false hope.

UC basketball is a white-hot mess now, for the foreseeable future