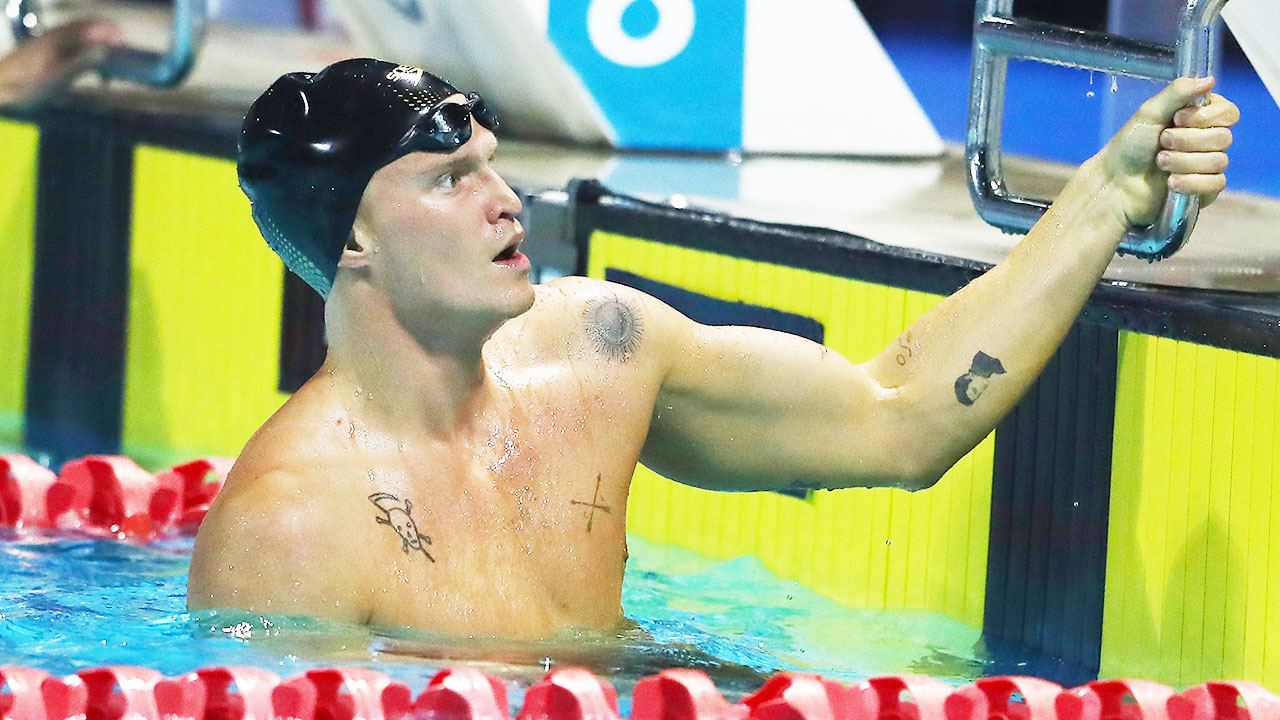 Cody Simpson has put his Olympic rivals on notice after delivering a stunning performance in his return to competitive action at the Australian Swimming Championships on the Gold Coast.

The pop star who once famously dated Miley Cyrus, was a mysterious no-show for the heats of his preferred 100m butterfly event on Friday.

‘LOVE TO SEE IT’: Fans savage ScoMo after AFL appearance

However, the 24-year-old made amends in the 50m butterfly on Saturday with an incredible swim that shows his Olympic aspirations are more than just a pipe dream.

Simpson faces a tough task to qualify for Australia’s team at the Tokyo Games later this year but his display on Saturday certainly raised more than a few eyebrows.

The singer-turned swimmer hit the wall in a time of 24.68 seconds in the 50m butterfly, finishing fifth in his heat.

He agonisingly missed out on clinching a spot in the final – missing out by just 0.02 seconds after clocking the 11th best time overall.

Considering it was his first competitive race in more than 10 years and he only signalled his intentions to have a crack at qualifying for the Olympics last year, it was an immensely impressive effort from the talented star.

Simpson looked somewhat disappointed with his swim afterwards, suggesting the 24-year-old believes he has even more speed to showcase.

The Australian National Swimming Championships is one of the major meets before June’s Olympic trials in Adelaide.

Simpson turned heads earlier in the week after showing off his ripped physique during a training session on the Gold Coast.

Last year, the former pop star gave himself a shot at competing in the Tokyo Games after smashing the qualifying benchmark of 56.87 seconds, with a time of 54.9s in the 100m butterfly.

Simpson had been training in the United States with Aussie Olympian Brett Hawke, before his recent return to Australia to compete.

Simpson working on a ‘four-year plan’

He is set to compete in the Olympic trials in Adelaide this June in an attempt to gain a ticket to Tokyo.

Last year, coach Hawke said Simpson was dedicated to a four-year plan regardless of this current Olympic trial outcome.

“Our goal is to be as fast as we can possibly be this year and just keep building on that,” Hawke told said on Afternoon Sport with former Australian cricketer Shane Lee and sports presenter Tim Gilbert.

“He’s looking at this as a four-year plan, he’s committed to four years.

“He had a conversation with (Olympic legend) Michael Phelps who told him, ‘You can’t do anything in under four years, you’ve got to commit to that’ so he said, ‘OK, I’ll agree to that, I’ll give it four years’.

“He’s looking from the age of 23-27 here and that’s prime athletic age for anybody.

“I think that’s the best chance he’ll have, to make an Olympic team four years from now.

“We’re not putting any limits on where we’re going with this, but at the same time we’re not telling people, ‘This is the goal’.

“We want to get better every day and see where it takes us.”