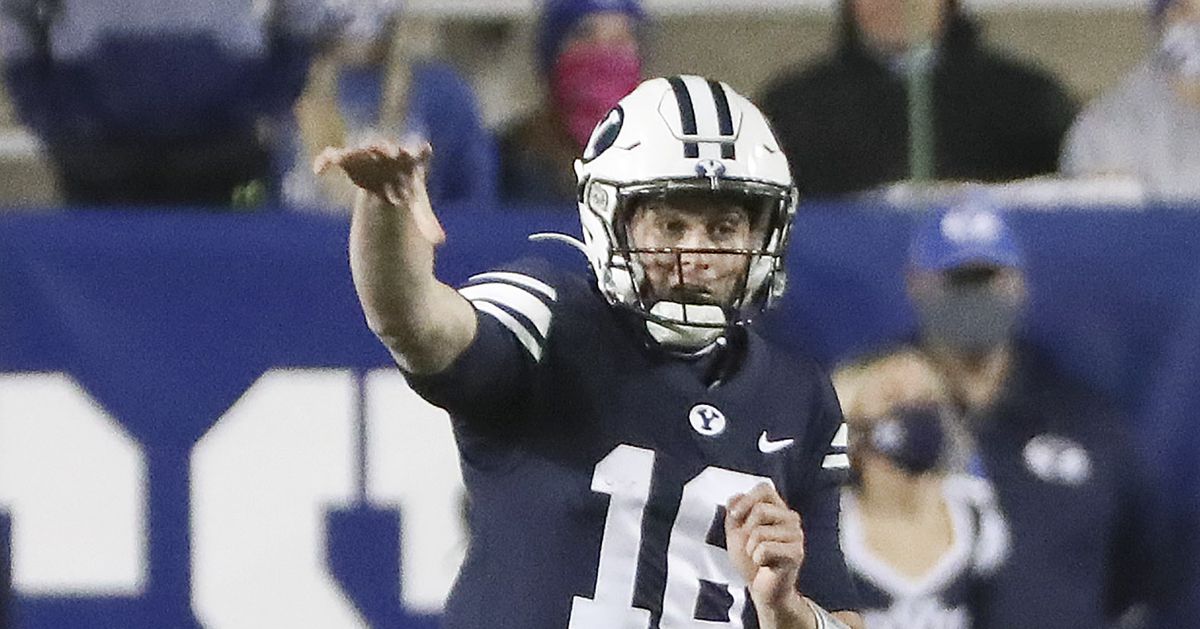 Hours after Zach Wilson awed dozens of NFL scouts, coaches and general managers at BYU’s pro day Friday morning, the 2021 Cougars took to the field at the Indoor Practice Facility on campus for one final practice of spring camp.

Of course, all eyes remained on the quarterbacks, and all four candidates for the starting job to replace Wilson got his opportunity to shine one more time before the team reconvenes at the end of July and opens preseason training camp.

“I am going to meet with each of those guys next week and talk about how we are going to go forward, but there will still be some competition in the fall. We are not ready to name a starter yet. We will go, I would say, at least a week to 10 days in the fall before we make any decisions like that.” — BYU offensive coordinator Aaron Roderick

Had the new OC named one, it would have been a bigger story — at least in these parts — than what Wilson did earlier in the day.

Alas, it didn’t happen. Roderick said the battle “is starting to take shape a little bit in my mind,” but declined to talk about anything resembling a depth chart at the vital position.

Baylor Romney, Jaren Hall, Jacob Conover and Sol-Jay Maiava-Peters are all still in the derby.

“I am going to meet with each of those guys next week and talk about how we are going to go forward, but there will still be some competition in the fall,” Roderick said. “We are not ready to name a starter yet. We will go, I would say, at least a week to 10 days in the fall before we make any decisions like that.”

Roderick and head coach Kalani Sitake have talked about the need to whittle a few names off the candidates board in order to give the bonafide contenders more reps before the season begins Sept. 4 in Las Vegas against Arizona, but Roderick said Friday night there is no rush, and Sitake referred to there being “four guys” still in the hunt for the starting job.

“I am not ready to go to two yet. But we have enough time. I feel confident,” Roderick said. “I feel like normally spreading the reps around with four guys should be pretty thin, but when you consider the accumulation of the reps (Hall and Romney) have had in the time they have been here, I think you can take this thing a little further.”

Sitake said there’s some value in keeping Arizona guessing, and seconded Roderick’s notion that the relatively good experience among the four enables coaches to delay their decision into fall camp. Then again, he said they won’t be playing cat-and-mouse games just to play games.

“There is an advantage there,” he said. “But as soon as we know what guy has earned it, we will try to make that decision right away. Hopefully we can get that done as soon as possible. That decision doesn’t have to be made right now, fortunately. The quarterbacks are playing so well right now.

“Like I said, I will play the best one,” he continued. “That’s the only way I know how to do it. And that’s at every position.”

Sitake said every QB improved over the course of the last four weeks, “making things really difficult” on coaches trying to trim the competition.

“So I saw them progress and get better in so many different areas and start to own the offense, and it was impressive especially with the amount of reps they had,” Sitake said. “It wasn’t like they had a bunch. They were split between the four of them. But I can say every one of those quarterbacks got better. … Looking forward to continued competition and seeing that play out even in the summer.”

Romney and Hall both spoke to reporters in a Zoom call Friday, and both said the competition has been friendly and helpful. Both said having a starter named soon is not that important.

“I like what is going on. It makes all of us compete. It makes all of us stay on our toes in a sense and really do our best each and every day and work as hard as we possibly can,” Romney said. “So I like where we are right now, and whatever the coaches decide in the fall is their decision to make.”

In this day and age of the transfer portal, and with the NCAA expected to make transferring easier and less punitive, coaches have to consider how making a decision soon could cause one of the candidates to seek greener pastures elsewhere. But neither Romney nor Hall gave any indication that could happen at BYU.

“I think collectively we got a lot better,” Hall said. “In 15 practices, there is a lot that you can learn from, a lot you can grow from. I think each of us showed out and did what we do best. We had fun and made each other better and so it was a good spring and I think we will be in good hands come fall.”