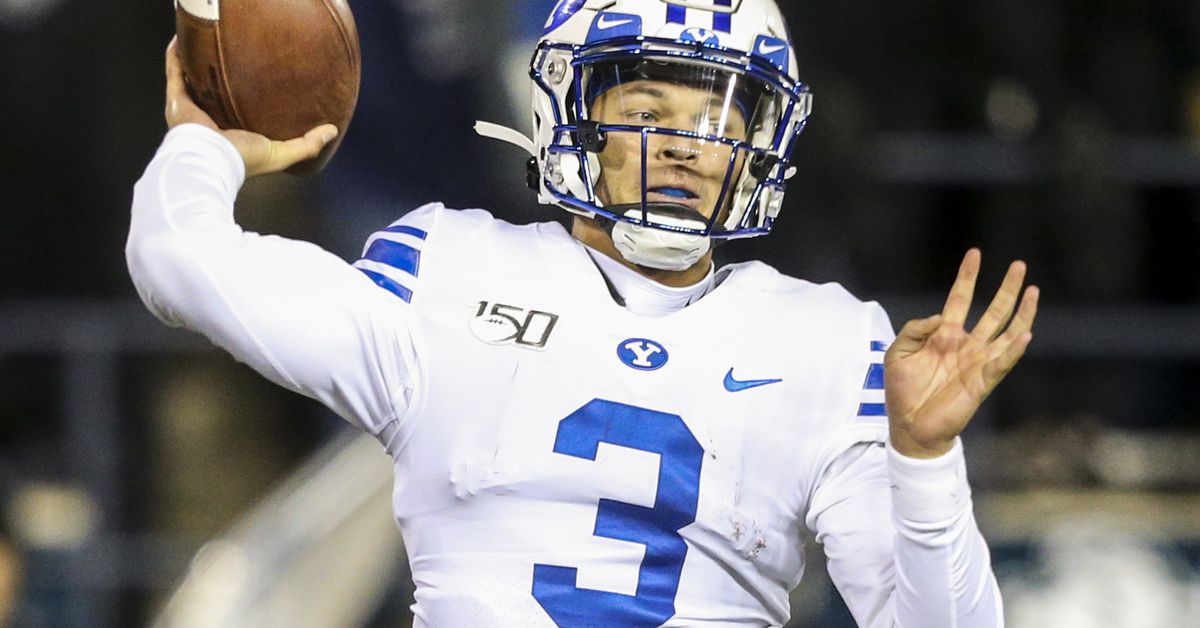 BYU football: Cougars still have much to prove after big 2020 season

As the BYU football team concluded spring camp at the end of March and started looking ahead to the 2021 season, head coach Kalani Sitake and his staff’s message for the Cougars moving forward became readily apparent.

“Depth is always a concern, but I think the bigger thing is the need for our players to keep the competitive edge that we have had,” new offensive coordinator Aaron Roderick said.

That wasn’t a concern a year ago at this time, after the Cougars in 2019 went 7-6 and finished the season with back-to-back losses to San Diego State and Hawaii.

“Guys were determined to not let that happen again,” quarterback Zach Wilson said at the time. “We knew we were better than that.”

“We gotta still keep that chip-on-our-shoulder attitude, with something to prove. We had a really good year. Don’t get me wrong. But there are a lot of people that still doubt us. There are a lot of people that don’t believe that we have good enough talent here even with the guys that we saw perform (at pro day).” — BYU football coach Kalani Sitake

The Cougars got better in a big way, despite having their schedule wrecked by COVID-19, and put together one of the best seasons in program history, going 11-1 and finishing No. 11 in the final Associated Press Top 25 poll.

The worry now for coaches and players not moving on to the NFL or other pursuits is complacency.

Quarterback Baylor Romney, one of four QBs vying to replace Wilson and be the starter when the Cougars open the season Sept. 4 against Arizona in Las Vegas, said there are enough remaining players who remember 2019 that maintaining that “chip on our shoulder” shouldn’t be a problem.

It appears to be a rebuilding year for Sitake and company, but don’t tell them that. Gone are some of the better players in the coach’s first five years at the helm: Wilson, offensive linemen Tristen Hoge, Chandon Herring and Brady Christensen, receiver Dax Milne, defensive tackles Khyiris Tonga, Bracken El-Bakri and Zac Dawe, linebackers Isaiah Kaufusi and Kavika Fonua, cornerback Chris Wilcox and safeties Zayne Anderson and Troy Warner.

Arguably, there are question marks at every position except receiver, running back, kicker and punter.

“Last year’s plan doesn’t work for this year. So that worked for last year and that was great. We saw some really good things. This year the plan has to be different,” Sitake said. “This year is way different.”

Sitake said the Cougars have a “different set of goals,” goals that he didn’t name specifically.

Sitake said he saw “hunger in these guys’ eyes” as the coaches turned them loose for player-run practices and offseason conditioning.

Who will replace the stars? Here’s the Deseret News’ second annual post-spring stab at what the depth chart will look like in 2021:

Offense has some firepower

As we reported in our spring camp wrap-up story, sources are saying Romney and Jaren Hall have emerged as the frontrunners to replace Wilson; we’re tabbing Romney as the starter, with the caveat that most involved say it is too close to call.

“I don’t expect there to be any drop-off from the offense we had last year,” Romney said. “There are tons of players who can make big plays at every single position.”

At running back, Tyler Allgeier rushed for 1,130 yards last year, while Lopini Katoa could easily be listed as a co-starter, and probably will be when coaches release a depth chart in late August. Katoa has caught 67 passes in his career, and gives BYU’s backfield a nice one-two punch.

The additions last week of brothers Puka and Samson Nacua from Washington and Utah, respectively, gives BYU one of the best receiving corps in the country, but makes predicting a two-deep chart at receiver three times as hard.

With starters Gunner Romney and Neil Pau’u back and guys such as Brayden Cosper, Chris Jackson, Keanu Hill and Kody Epps hungry for more playing time, receivers coach Fesi Sitake has a good problem on his hands.

Analysts say BYU lost more offensive production than any Football Bowl Subdivision team in the country, but the brothers Nacua should help fill in the gaps. And the Cougars are loaded at tight end, with Isaac Rex back after catching 12 touchdown passes last year.

Dallin Holker is back from a church mission and ready to press for playing time. We went with hybrid fullback/tight end Masen Wake as Rex’s backup, although the bulldozer didn’t do much in spring camp.

“Bentley Hanshaw has been a big surprise,” Clark said.

There are some gaps at offensive line, but some good returning talent with which new OL coach Darrell Funk can work. Picking a starting five is fairly easy: left tackle Blake Freeland, left guard Clark Barrington, center James Empey, right guard Connor Pay and right tackle Harris LaChance are the most healthy or most experienced.

“There are always areas of concern and staying healthy is always one,” Roderick said. “Saying you have depth is always like the famous last words, right? As soon as you say you have got depth at a certain position, next thing you know you are out three guys and you are finding out you really aren’t that deep.”

Defense will be young and inexperienced

Sitake said as camp was wrapping up that linebacker was one of the most settled positions on the team, as Payton Wilgar, Keenan Pili and Max Tooley took over the starting spots. Naming their backups isn’t as easy, but we will go with Drew Jensen, Josh Wilson and Ben Bywater, knowing that several LB and hybrid DB positions are interchangeable in Ilaisa Tuiaki’s defense.

In other words, new defensive ends coach Preston Hadley has his work cut out for him.

From spring camp reports, limited as they were, it appears that Tyler Batty and Uriah Leiataua could be the starting defensive ends, with converted offensive lineman Caden Haws and a player coming off a season-ending injury, junior Lorenzo Fauatea, manning the middle.

“We have some good young guys we are excited about, and we are also working with some of the veteran guys who have had their careers (interrupted) by injuries,” Hadley said, referring to Leiataua, Mahe, Tofa and Fauatea, among others.

Safety is a huge concern for the Cougars, with Warner and Anderson graduating, but former four-star recruit Chaz Ah You will help immensely, assuming he returns from an assortment of injuries that caused him to miss the bulk of the 2020 season. Malik Moore, Hayden Livingston and Ammon Hannemann also made our two-deep chart.

Special teams should be special

A year after special teams gaffes cost the Cougars chances to win against the likes of Toledo, South Florida and San Diego State, they were almost flawless in 2020. The good news is that kicker Jake Oldroyd, punter Ryan Rehkow and most of the kick and punt returners are back in 2021.

Look for nickel back Caleb Christensen, who special teams coach Ed Lamb says is “fearless,” to take one to the house in 2021. He’s that good.

Talmage Gunther, the former Lone Peak quarterback, earned playing time with his reliability at the end of the season as a punt returner. Hobbs Nyberg is also in the mix.

Lamb, who is back coaching safeties this year, might have the easiest coordinator job on the staff. Oldroyd was a perfect 13 of 13 on field goal attempts, and 60 of 62 on PATs. Rehkow averaged 45.1 yards per punt, which would have put him among the nation’s leaders if he had more than 28 attempts.

What’s a realistic goal for this young — but hungry — group?

Finishing with a winning record — assuming the 2021 schedule holds up — should be the Cougars’ primary aim in Sitake’s sixth year.

“I like my team,” Sitake said, channeling his inner LaVell Edwards. “If we can stay healthy and stay hungry, we have a chance to be a good football team.”

Seven Power Five conference teams on the schedule, in addition to Boise State and heated instate rival Utah State, should test that belief from the start of the season to the end.

“We gotta find a quarterback that is going to be the best out of the bunch and then rally around him,” Sitake said. “In every other position we have got to find a way to get better, and make sure that we are ready to go when we get to Vegas and play that first game.”

Note: Numbers for Nacua brothers are what they wore with their previous teams

Sean Miller out at Arizona; what took so long?