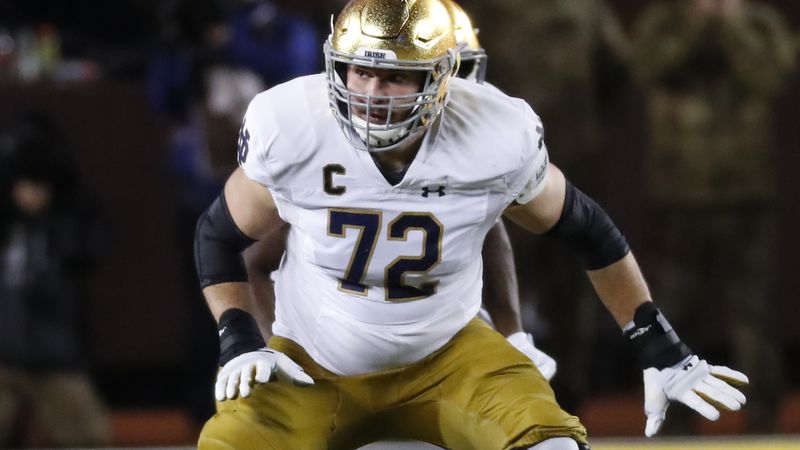 Shortly after drafting a backup to Tom Brady on Friday evening, the Bucs selected some additional protection for him.

Notre Dame senior offensive lineman Robert Hainsey, who projects as a guard or center in the NFL, was selected by the Bucs late in the third round of the NFL draft with the 95th overall pick. A two-year team captain and second-team all-ACC pick last season, his resume features 34 collegiate starts at right tackle.

“He’s got all the traits that our current group have. I think he’s going to fit in great. He’s going to be a guy that hopefully we can plug in at several positions and be a four-spot guy possibly at some point.”

Related: Why Kyle Trask makes sense for the Bucs

Hainsey, who hails from Pittsburgh but spent his final two prep seasons at IMG Academy in Bradenton, anchored an Irish line that won the time-of-possession battle in 11 of its 12 games last season. Notre Dame (10-2) finished 24th nationally in rushing offense (211.1 yards per game).

But Licht and coach Bruce Arians indicated Hainsey (6-foot-4½, 306 pounds) caught their eye at the Senior Bowl by how he flourished in reps at guard and center.

“I went down to the Senior Bowl having not played those positions before — in practice, in a game, in anything,” Hainsey said. “But I’m confident in my abilities as a football player and what I can do, so I was really excited to get down there and showcase that. I knew people wanted to see it, and I had a lot of fun doing it.”

NFL.com’s Daniel Jeremiah named Hainsey one of his 10 “winners” at the event for how he practiced, noting his “good hands” and “firm base” while lining up at multiple spots.

“Some guys will balk at going to different positions,” Arians said.

“He was more than willing (to try) left guard, right guard, center. And he showed position flexibility against some of the best guys in the draft. I think for him, it’s just coming in and finding what’s the best niche for him, and for us to find that niche.”

Hainsey, one of three Irish offensive linemen drafted Friday night, will have ample time to find it.

In addition to returning all five starters along the line, the Bucs recently re-signed backup Aaron Stinnie, who flourished as a starting right guard in the playoffs when Alex Cappa suffered a fractured ankle in the wild-card victory against Washington.

“Just the reality of getting to this point has been incredible,” Hainsey said. “I’ve worked for a long time to get here and I’ve got a long way to go, but I’m really excited for this part and to take the next step with Tampa Bay.”

The Bucs have five picks over the final four rounds Saturday, including a pair of seventh-rounders. Arians’ priority for the draft’s final day?

“We’re always looking for guys that can run,” he said.

“Speed in any kind of category, whether it’s defensive backs who could be gunners. We need to improve our special teams. And for those guys (Saturday) we’ll be looking at guys who can fill roles, but also can be really core special-teams players that can help us in those areas.”

Sign up for the Bucs RedZone newsletter to get updates and analysis on the latest team and NFL news from Bucs beat writer Joey Knight.

Never miss out on the latest with the Bucs, Rays, Lightning, Florida college sports and more. Follow our Tampa Bay Times sports team on Twitter and Facebook.