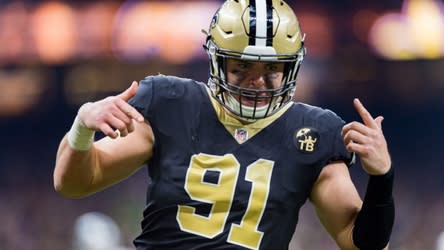 The Jets and GM Joe Douglas are armed with around $69 million in cap space this offseason, which is why Gang Green is expected to be highly active in landing new players from every tier.

Trey Hendrickson has agreed to a four-year, $60 million deal with the Bengals, according to NFL Network’s Tom Pelissero.

Hendrickson will immediately fill the void left by Carl Lawson, who the Jets signed earlier on Monday.

The Jets were interested in Bourne, but he wasn’t considered a high priority for them, according to SNY’s Ralph Vacchiano.

SNY’s Ralph Vacchiano has confirmed that the Jets are one of a few teams showing interest in San Francisco 49ers wide receiver Kendrick Bourne — though he is not a high priority for the team at the moment.

The 6-1, 200 pound receiver has been a fairly productive third receiver for the 49ers.

ESPN’s Jeremy Fowler reports that the New England Patriots are working on a potential deal with Bourne, but he’s gotten multiple offers and is still talking to other teams — like the Jets.

Joe Thuney, who was one of the top targets on the Jets’ board, has signed a five-year deal with the Kansas City Chiefs worth $80 million, reports SNY’s Ralph Vacchiano.

The Jets have Joe Thuney near the top of their list, but the New England Patriots could be a serious threat.

The Pats have interest in retaining Thuney, reports SNY’s Ralph Vacchiano. Per Vacchiano, New England’s interest in Thuney bears watching due in part to the question of how much of a bidding war the Jets are willing to get into for him.

While the Jets will be looking in the upper echelon of free agents, second-tier guys will also be on their radar if they miss out on landing the top dogs.

The Jets have an interest in 49ers cornerback K’Waun Williams and the interest appears to be mutual, an NFL source told SNY’s Ralph Vacchiano.

The Jets are unlikely to make any offers to him right away, though, until the first wave of free agency is over. Several teams have reached out to the 29-year-old New Jersey native, who played in only eight games last season due to a knee injury.

He’s considered one of the top slot cornerbacks on the market, though, and is known to be a favorite of new head coach Robert Saleh, the 49ers’ former defensive coordinator.

According to NFL Network’s Jeremy Fowler, there is mutual interest between the Jets and WR Breshad Perriman to work out a deal for the veteran to return to New York next season. Fowler added it might not get done, but it’s been brought up.

Perriman joined the Jets last year when Robby Anderson chose the Carolina Panthers instead of returning to the Jets. Injuries hampered Perriman a bit, which has been a problem in the past, and he hauled in just 30 catches for 505 yards and three touchdowns.

He’s still a vertical threat when he’s healthy and only 27 years old. Perriman wouldn’t cost much either.

When the “legal tampering” period begins on Monday at noon, the Jets are expected to look heavy in the edge rusher department, multiple sources told SNY’s Ralph Vacchiano.

There are a good crop of edge rushers, including Matt Judon, Yannick Ngakoue, Bud Dupree and more that the Jets could bring over to New York.

They are also expected to be looking in the offensive line department, something Douglas is determined to fix for whoever quarterbacks the team this season. Guard Joe Thuney makes the list there.