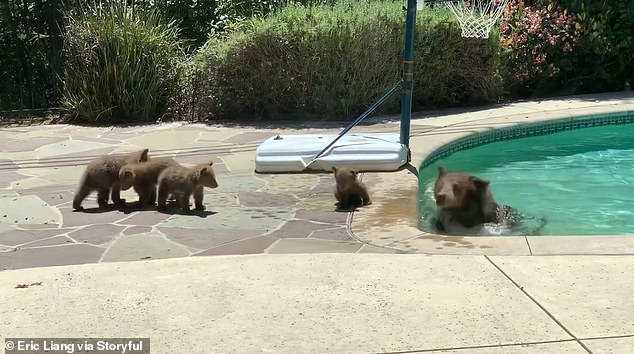 Bear takes family for a dip in a Californian swimming pool

Just right! Mama bear takes a cooling dip in family’s swimming pool while trying to keep an eye on her four inquisitive cubs

By Darren Boyle for MailOnline

This is the moment a mother bear sneaks into a Californian backyard to take a dip in the pool with her four playful cubs in tow.

The amusing footage was filmed by Eric Liang at his family’s home in Arcadia, California.

He described the encounter as ‘Mama and four cubs treating our house like a vacation rental.’

During the video, the mother bear lies back in the pool and cools down while her four cubs play together, avoiding the water.

After about a minute in thepool, the mother bear gets out of the water and leads three of the cubs off.

But one cub remains by the pool and the mother has to return and nudge it with her snout to encourage it to rejoin its siblings.

Eric Liang filmed the bear and four cubs frolicking in the pool at the back of home in Arcadia, California 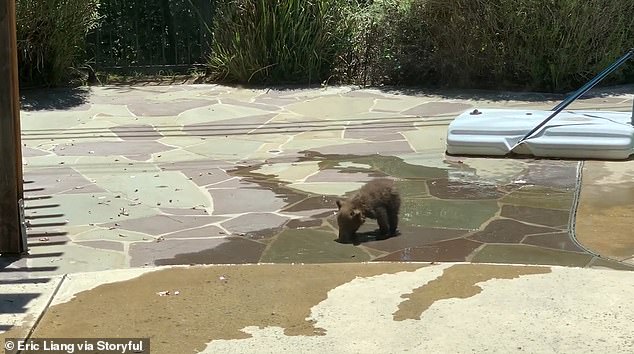 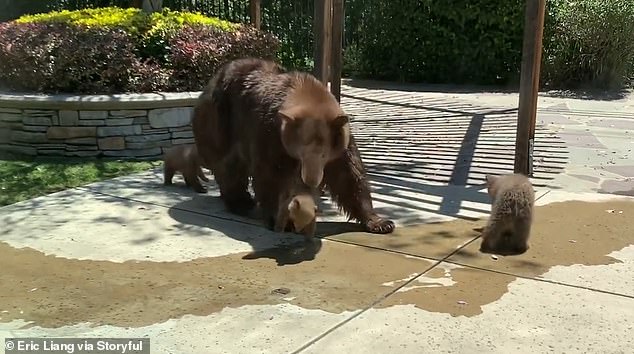 Mr Liang has posted several videos on YouTube of bears visiting his family’s home, which is to the east of Los Angeles and south of Angeles National Forest.

During one visit in 2017, a young cub began playing with an inflatable flamingo pool toy.

To remain safe, the family film their ursine visitors from behind the safety of their patio door.